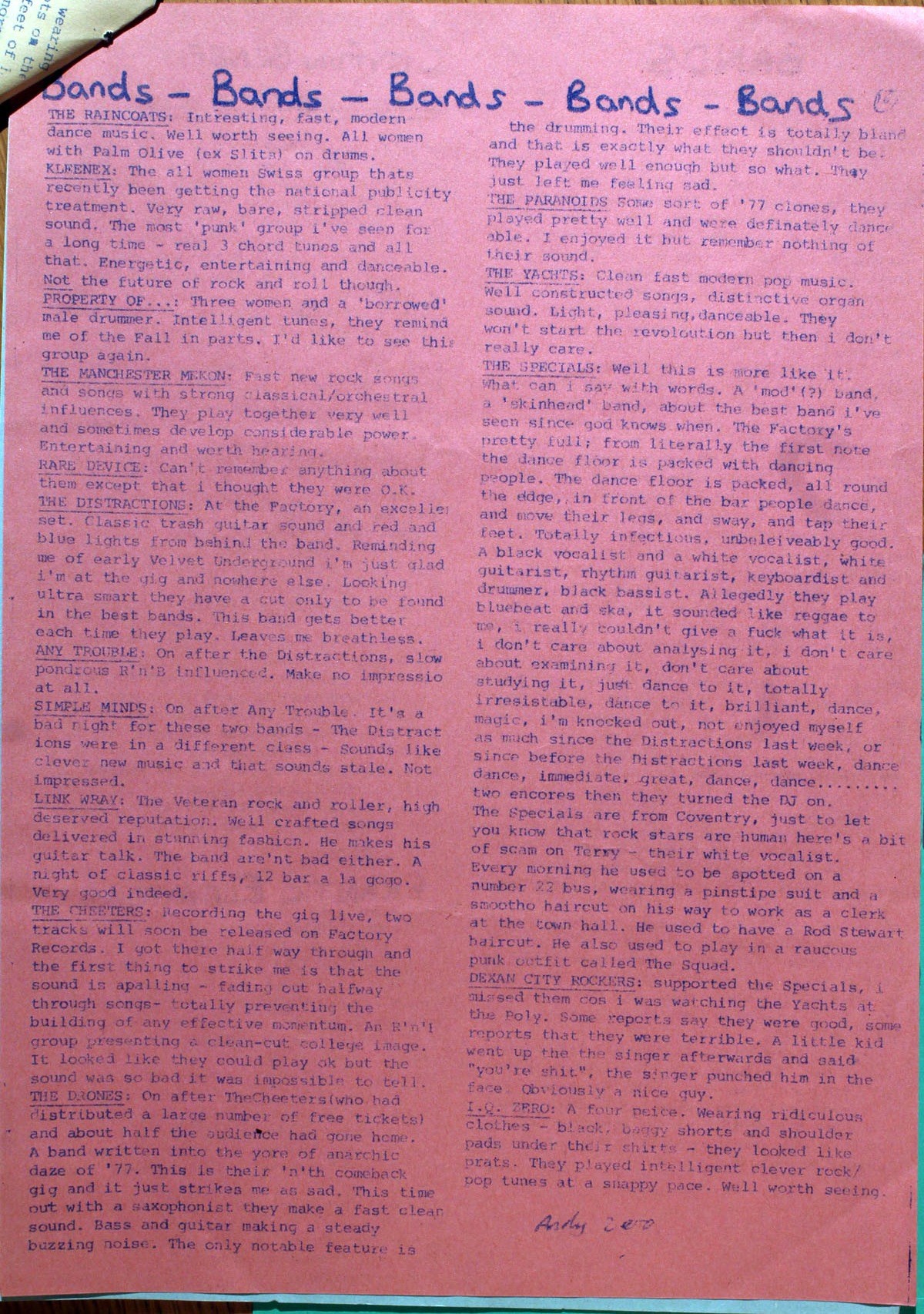 Bands - Bands - Bands - Bands - Bands
THE RAINCOATS: Interesting, fast, modern dance music. Well worth seeing. All women with Palm Olive (ex Slits) on drums.
KLEENEX: The all woman Swiss group thats recently been getting the national publicity treatment. Very raw, bare, stripped clean sound. The most 'punk' group I've seen for a long time - real 3 chord tunes and all that. Energetic, entertaining and danceable. Not the future of rock and roll though.
PROPERTY OF...: Three women and a 'borrowed' male drummer. Intelligent tunes, they remind me of the Fall in parts. I'd like to see this group again.
THE MANCHESTER MEKON: Fast new rock songs and songs with strong classical/orchestral influences. They play together very well and sometimes develop considerable power. Entertaining and worth hearing.
RARE DEVICE: Can't remember anything about them except that i thought they were O.K.
THE DISTRACTIONS: At the Factory, an excellen set. Classic trash guitar sound and red and blue lights from behind the band. Reminding me of early Velvet Underground i'm just glad i'm at the gig and nowhere else. Looking ultra smart they have a cut only to be found in the best bands. This band gets better each time they play. Leaves me breathless.
ANY TROUBLE: On after the Distractions, slow pondrous R'n'B influenced. Make no impresson at all.
SIMPLE MINDS: On after Any Trouble. It's a bad night for these two bands - The Distractions were in a different class - Sounds like clever new music and that sounds stale. Not impressed.
LINK WRAY: The Veteran rock and roller, high deserved reputation. Well crafted songs delivered in stunning fashion. He makes his guitar talk. The band are'nt bad either. A night of classic riffs, 12 bar a la gogo. Very good indeed.
THE CHEETERS: Recording the gig live, two tracks will soon be released on Factory Records. I got there half way through and the first thing to strike me is that the sound is apalling - fading out halfway through songs totally preventing the building of any effective momentum. An R'n'R group presenting a clean-cut college image. It looked they could play ok but the sounds was so bad it was impossible to tell.
THE DRONES: On after TheCheeters(who had distributed a large number of free tickets) and about half the audience had gone home. A band written into the yore of anarchic daze in '77. This is their 'n'th comeback gig and it just strikes me as sad. This time out with a saxophonist they make a fast clear sound. Bass and guitar making a steady buzzing noise. The only notable feature is the drumming. Their effect is totally bland and that is exactly what they shouldn't be. They played well enough but so what. They just left me feeling sad.
THE PARANOIDS Some sort of '77 clones, they played pretty well and were definately danceable. I enjoyed it but remember nothing of their sound.
THE YACHTS: Clean fast modern pop music. Well constructed songs, distinctive organ sound. Light, pleasing,danceable. They won't start the revolution but the i don't really care.
THE SPECIALS: Well this is more like it. What can i say with words. A 'mod' (?) band, a 'skinhead' band, about the best band i've seen since god knows when. The Factory's pretty full; from literally the first note the dance floor is packed with dancing people. The dance floor is packed, all round the edge, in front of the bar people dance, and move their legs, and sway, and tap their feet. Totally infectious, unbeleiveably good. A black vocalist and a white vocalist, white guitarist, rhythm guitarist, keyboardist and drummer, black bassist. Allegedly they play bluebeat and ska, it sounded like reggae to me, i really couldn't give a fuck what it is, i don't care about analysing it, i don't care about examining it, don't care about studying it, just dance to it, totally irresistable, dance to it, brilliant, dance, magic, i'm knocked out, not enjoyed myself as much since the Distractions last week, dance dance, immediate, great, dance, dance................. two encores then they turned the DJ on. The Specials are from Coventry, just to let you know that rock stars are human here's a bit of scam on Terry - their white vocalist. Every morning he used to be spotted on a number 22 bus, wearing a pinstripe suite and a smootho haircut on his way to work as a clerk at the town hall. He used to have a Rod Stewart haircut. He also used to play in a raucous punk outfit called The Squad.
DEXAN CITY ROCKERS: supported The Specials, i missed them cos i was watching the Yachts at the Poly. Some reports say they were good, some reports that they were terrible. A little kid went up to the singer afterwards and said "you're shit", the singer punched him in the face. Obviously a nice guy.
I.Q. ZERO: A four peice. Wearing ridiculous clothes - black, baggy shorts and shoulder pads under their shirts - they looked like prats. They played intelligent clever rock/pop tunes at a snappy pace. Well worth seeing.