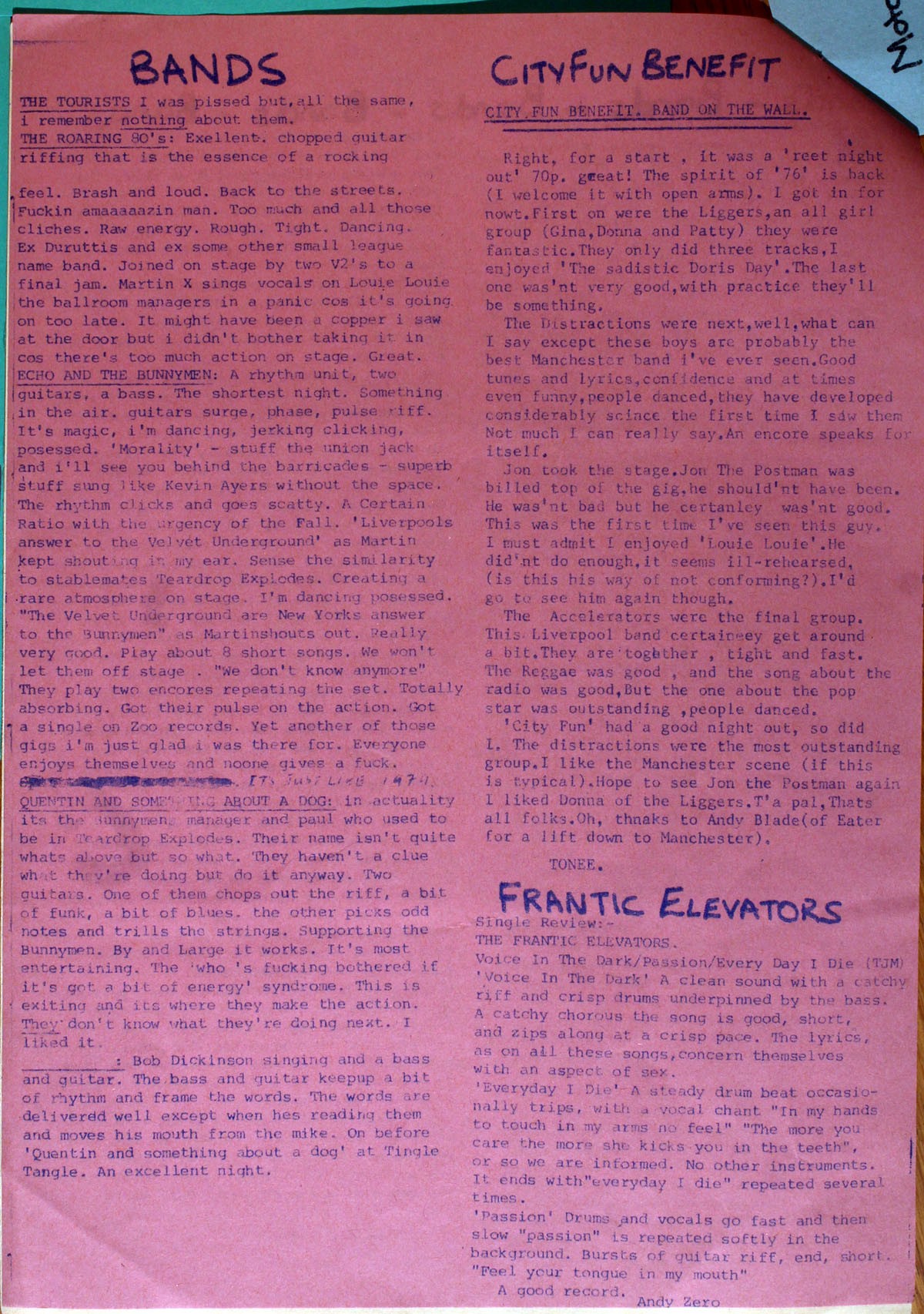 BANDS
THE TOURISTS I was pissed but,all the same, I remember nothing about them.
THE ROARING 80's: Excellent, chopped guitar reffing that is the essence of arocking feel. Brash and loud. Back to the streets. Fuckin amaaaazin man. Too much and all those cliches. Raw energy. Rough. Tight. Dancing. Ex Duruttis and some other small league name band. Joined on stage by two V2's to a final jam. Martin X sings vocals on Louie Louie the ballroom managers in a panic now cos it's going on too late. It might have been a copper i saw at the door but i didn't bother taking it in cos there's too much action on stage. Great.
ECHO AND THE BUNNYMEN: A rhythm unit, two guitars, a bass. The shortest night. Something in the air, guitars surge, phase, pulse riff. It's magic, i'm dancing, jerking clicking, posessed. 'Morality' - stuff the union jack and i'll see you behind the barricades - superb stuff sung like Kevin Ayers without the space. The rhythm clicks and goes scatty. A Certain Ratio with the urgency of the Fall. 'Liverpools answer to the Velvet Underground' as Martin kept shouting in my ear. Sense the similarity to stablemates Teardrop Explodes. Creating a rare atmosphere on stage. I'm dancing posessed. "The Velvet Underground are New Yorks answer to the Bunnymen" as Martinshouts out. Really very good. Play about 8 short songs. We won't let them off stage . "We don't know anymore" They play two encores repeating the set. Totally absorbing. Got their pulse on the action. Got a single on Zoo records. Yet another of those gigs i'm just glad i was there for. Everyone enjoys themselves and noone gives a fuck. It's just like 1971.
QUENTIN AND SOMETHING ABOUT A DOG: in actuality its the Bunnymen manager and paul who used to be in Teardrop Explodes. Their name isn't quite whats above but so what. They haven't a clue what they're doing but do it anyway. Two guitars. One of them chops out the riff, a bit of funk, a bit of blues. the other picks odd notes and trills the strings. Supporting the Bunnymen. By and Large it works. It's most entertaining. The 'who 's fucking bothered if it's got a bit of energy' syndrome. This is exiting and its where they make the action. They don't know what they're doing next. I liked it.
___________________: Bob Dickinson singing and a bass and guitar. The bass and guitar keepup a bit of rhythm and frame the words. The words are delivered well except when he's reading them and moves his mouth from the mike. On before 'Quentin and something about a dog' at Tingle Tangle. An excellent night.
CITYFUN BENEFIT
CITY FUN BENEFIT. BAND ON THE WALL
Right, for a start , it was a 'reet night out' 70p. Great! The spirit of '76' is back (I welcome it with open arms). I got in for nowt.First on were the Liggers,an all girl group (Gina, Donna and Patty) they were fantastic.They only did three tracks, I enjoyed 'The sadistic Doris Day' .The last one was'nt very good,with practice they'll be something.
The Distractions were next, well what can I say except these boys are probably the best Manchester band i've ever seen.Good tunes and lyrics, confidence and at times even funny, people danced, they have developed considerably scince the first time I saw them. Not much I can really say.An encore speaks for itself.
Jon took the stage.Jon The Postman was billed top of the gig,he shouldn't have been. He was'nt bad but he certainly was'nt good. This was the first time I've seen this guy. I must admit I enjoyed 'Louie Louie' .He did'nt do enough.it seems ill-rehearsed, (is this way of not conforming?).I'd got to see him again though.
The Accelerators were the final group. This Liverpool band certaineey get around a bit. They are together , tight and fast. The Reggae was good , and the song about the radio was good,But the one about the pop star was outstanding ,people danced.
'City Fun' had a good night out, so did I. The distractions were the most outstanding group.I like the Manchester scene (if this is typical).Hope to see Jon the Postman again. I liked Donna of the Liggers.T'a pal,Thats all folks.Oh, thnaks to Andy Blade( of Eater for a lift down to Manchester).
TONEE
FRANTIC ELEVATORS
Single Review:-
THE FRANTIC ELEVATORS.
Voice In The Dark/Passion/Every Day I Die (TJM)
'Voice In The Dark' A clean sound with a catchy riff and crisp drums underpinned by the bass. A catchy chorous the song is good, short, and zips along at a crisp pace. The lyrics, as on all these songs,concern themselves with an aspect of sex.
'Every Day I Die' A steady drum beat occasionally trips, with a vocal chant "in my hands to touch in my arms no feel" "The more you care the more she kicks you in the teeth", or so we are informed. No other instruments. It ends with"everyday I die" repeated several times.
'Passion' Drums and vocals go fast and then slow "passion" is repeated softly in the background. Bursts of guitar riff, end, short. "Feel your tongue in my mouth"
A good record.
Andy Zero