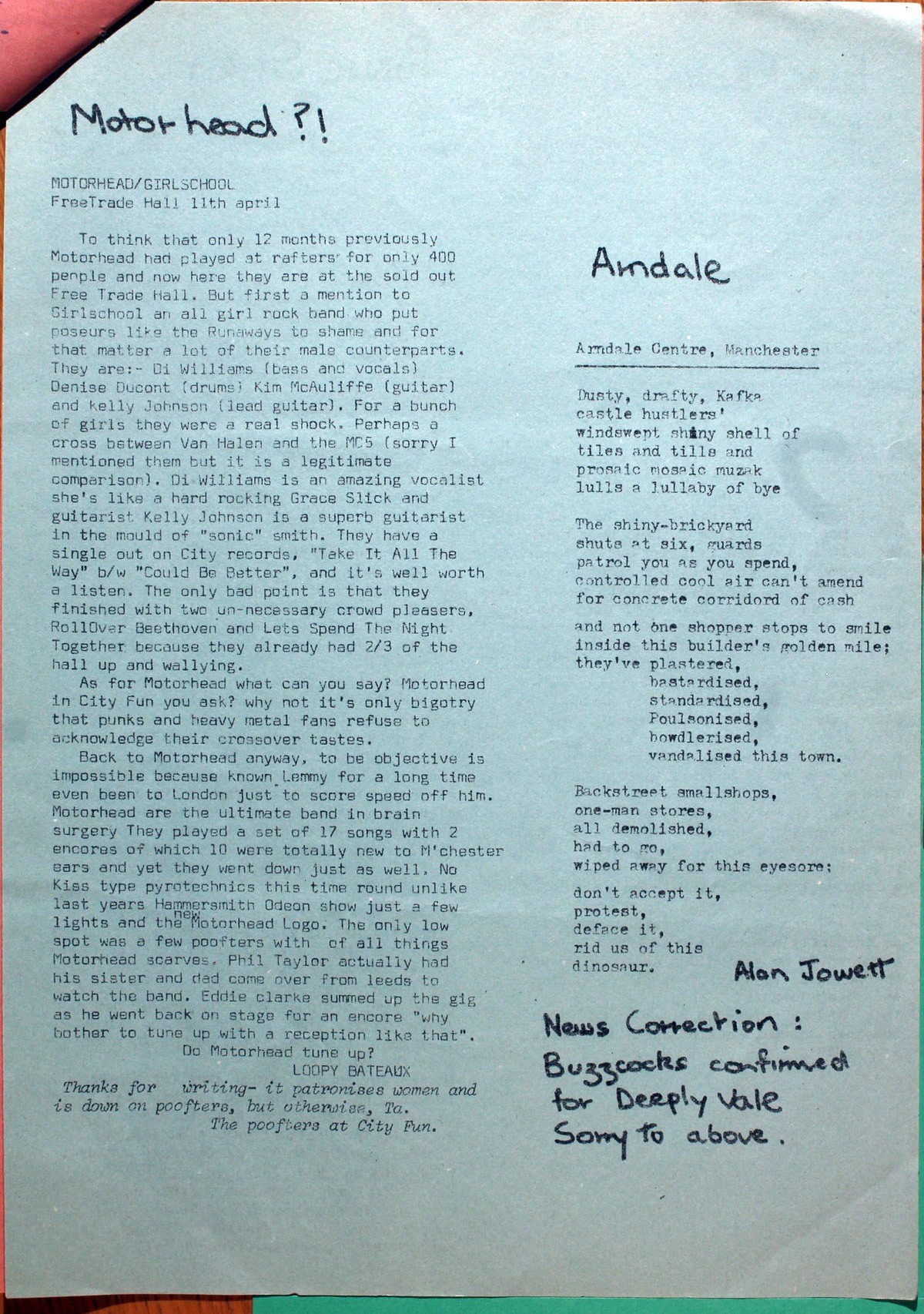 Motorhead ?!
MOTORHEAD/GIRLSCHOOL
FreeTrade Hall 11th april
To think that only 12 months previously Motorhead had played at rafters for only 400 people and now here they are at the sold out Free Trade Hall. But first a mention to Girlschool an all girl rock band who put poseurs like The Runaways to shame and for that matter a lot of their male counterparts. They are:- Di Williams (bass and vocals) Denise Ducont (drums) Kim McAuliffe (guitar) and kelly Johnson (lead guitar). For a bunch of girls they were a real shock. Perhaps a cross between Van Halen and the MC5 (sorry I mentioned them but it is a legitimate comparison). Di Williams is an amazing vocalist she's like a hard rocking Grace Slick and guitarist Kelly Johnson is a superb guitarist in the mould of "sonic" smith. They have a single out on City records, "Take It All The Way" b/w ""Could Be Better", and it's well worth a listen. The only bad point is that they finished with two un-necessary crowd pleasers, RollOver Beethoven and Lets Spend The Night Together because they already had 2/3 of the hall up and wallying.
As for Motorhead what can you say? Motorhead in City Fun you ask? why not it's only bigotry that punks and heavy metal fans refuse to acknowledge their crossover tastes.
Back to Motorhead anyway, to be objective is impossible because known Lemmy for a long time even been to London just to score speed off him. Motorhead are the ultimate band in brain surgery They played a set of 17 songs with 2 encores of which 10 were totally new to M'chester ears and yet they went down just as well. No Kiss type pyrotechnics this time round unlike last years Hammersmith Odeon show just a few lights and the new Motorhead Logo. The only low spot was a few poofters with of all things Motorhead scarves. Phil Taylor actually had his sister and dad come over from leeds to watch the band. Eddie clarke summed up the gig as he went back on stage for an encore "why bother to tune up with a reception like that".
Do Motorhead tune up?
LOOPY BATEAUX
Thanks for writing- it patronises women and is down on poofters, but otherwise, Ta.
The poofters at City Fun.
Arndale
Arndale Centre, Manchester
Dusty, drafty, Kafka
castle hustlers'
windswept shiny shell of
tiles and tills and
prosaic mosaic muzak
lulls a lullabiy of bye
The shiny-brickyard
shuts at six, guards
patrol you as you spend,
controlled cool air can't amend
for concrete corridord of cash
and not one shopper stops to smile
inside this builder's golden mile;
they've plastered,
bastardised,
standardised,
Poulsonised,
bowdlerised,
vandalised this town.
Backstreet smallshops,
one-man stores,
all demolished,
had to go,
wiped away for this eyesore;
don't accept it,
protest,
deface it,
rid us of this
dinosaur.
Alan Jowett
News Correction: Buzzcocks confirmed for Deeply Vale
Sorry to above.