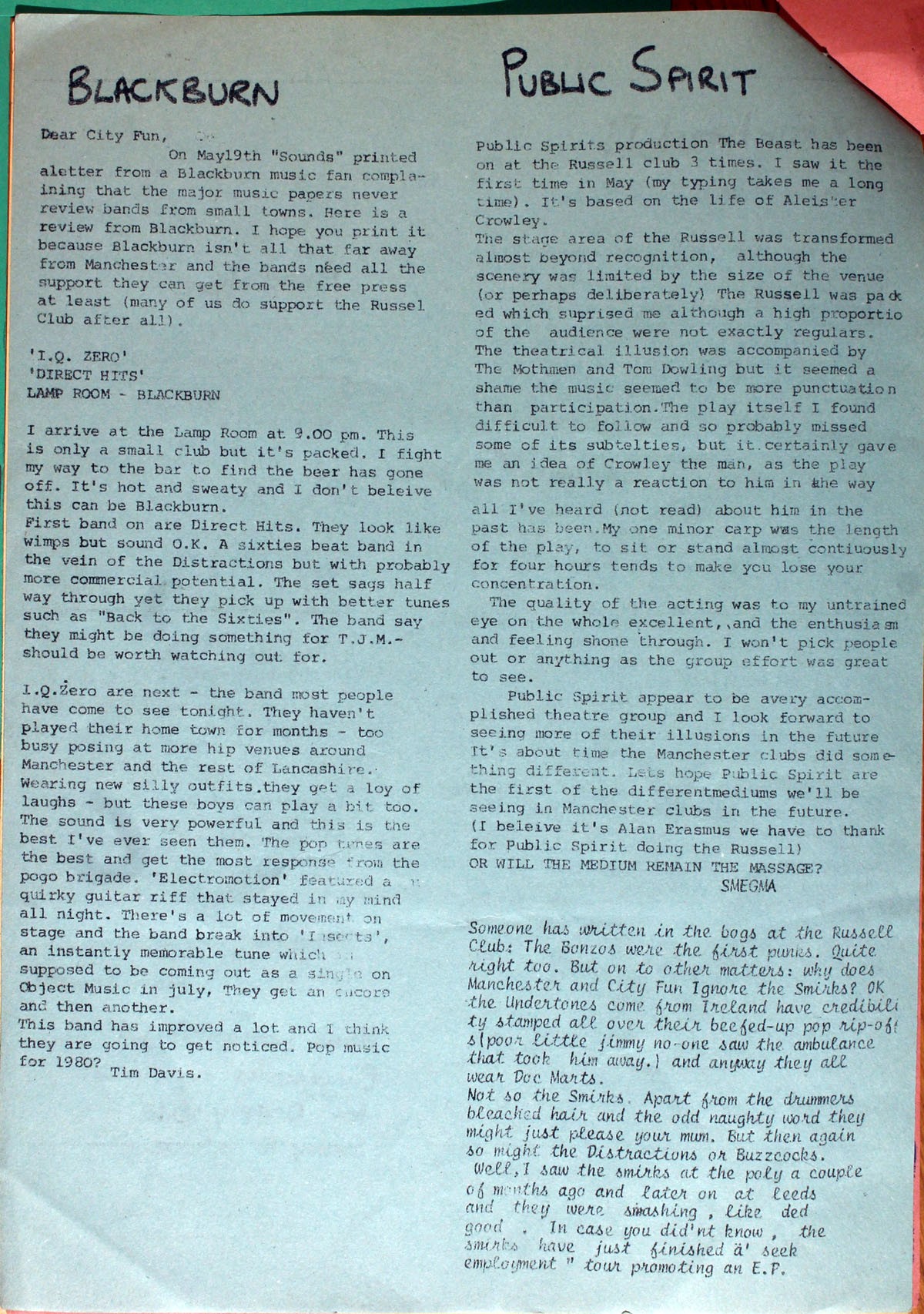 BLACKBURN
Dear City Fun,
On May19th "Sounds" printed aletter from a Blackburn music fan compla-ining that the major music papers never review bands from small towns. Here is a review from Blackburn. I hope you print it because Blackburn isn't all that far away from Manchester and the bands need all the support they can get from the free press at last (many of us do support the Russel Club after all).
'I.Q. ZERO'
'DIRECT HITS'
LAMP ROOM - BLACKBURN
I arrive at the Lamp Room at 9.00 pm. This is only a small club but it's packed. I fight my way to the bar to find the beer has gone off. It's hot and sweaty and I don't believe this can be Blackburn.
First band on are Direct Hits. They look like wimps but sound O.K. A sixties beat band in the vein of the Distractions but with probably more commercial potential. The set sags half way through yet they pick up with better tunes such as "Back to the Sixties". The band say they might be doing something for T.J.M.- should be worth watching out for.
I.Q.Zero are next - the band most people have come to see tonight. They haven't played their home town for months - too busy posing at more hip venues around Manchester and the rest of Lancashire. Wearing silly new outfits.they get a loy of laughs - but these boys can play a bit too. The sound is very powerful and this is the best I've ever seen them. The pop tunes are the best and get the most response from the pogo brigade. 'Electromotion' featured a quirky guitar riff that stayed in my mind all night. There's a lot of movement on stage and the band break into 'Insects', an instantly memorable tune which is supposed to be coming out on Object Music in july, They get an encore and then another.
This band has improved a lot and I think they are going to get noticed. Pop music for 1980?
Tim Davis
PUBLIC SPIRIT
Public Spirits production The Beast has been on at the Russell club 3 times. I saw it the first time in May (my typing takes me a long time). It's based on the life of Aleister Crowley.
The stage area of the Russell was transformed almost beyond recognition, although the scenery was limited by the size of the venue (or perhaps deliberately) The Russell was packed which surprised me although a high proportio of the audience were not exactly regulars. The theatrical illusion was accompanied by The Mothmen and Tom Dowling but it seemed a shame the music seemed to be more punctuation than participation. The play itself I found difficult to follow and so probably missed some of its subtelties, but it certainly gave me an idea of Crowley the man, as the play was not really a reaction to him in he way all I've heard (not read) about him in the past has been.My one minor carp was the length of the play, to sit or stand almost contiuously for four hours tends to make you lose your concentration.
The quality of the acting was to my untrained eye on the whole excellent, and the enthusiasm and feeling shone through. I won't pick people out or anything as the group effort was great to see.
Public Spirit appear to be avery accom-plished theatre group and I look forward to seeing more of their illusions in the future It's about time Manchester clubs did some-thing different. Lets hope Public Spirit are the first of the differentmediums we'll be seeing in Manchester clubs in the future. (I believe it's Alan Erasmus we have to thank for Public Spirit doing the Russell).
OR WILL THE MEDIUM REMAIN THE MASSAGE?
SMEGMA
Someone has written in the bogs at the Russell Club: The Bonzos were the first punks. Quite right too. But on to other matters: why does Manchester and City Fun ignore the Smirks? OK the Undertones come from Ireland have credibility stamped all over their beefed-up pop rip-offs(poor little jimmy no-one saw the ambulance that took him away.) and anyway they all wear Doc Marts.
Not so the Smirks. Apart from the drummers bleached hair and the odd naughty word they might just please your mum. But then again so might the Distractions or Buzzcocks.
Well, I saw the smirks at the poly a couple of months ago and later on at leeds and they were smashing, like ded good . In case you did'nt know, the smirks have just finished a' seek employment " tour promoting an E.P.