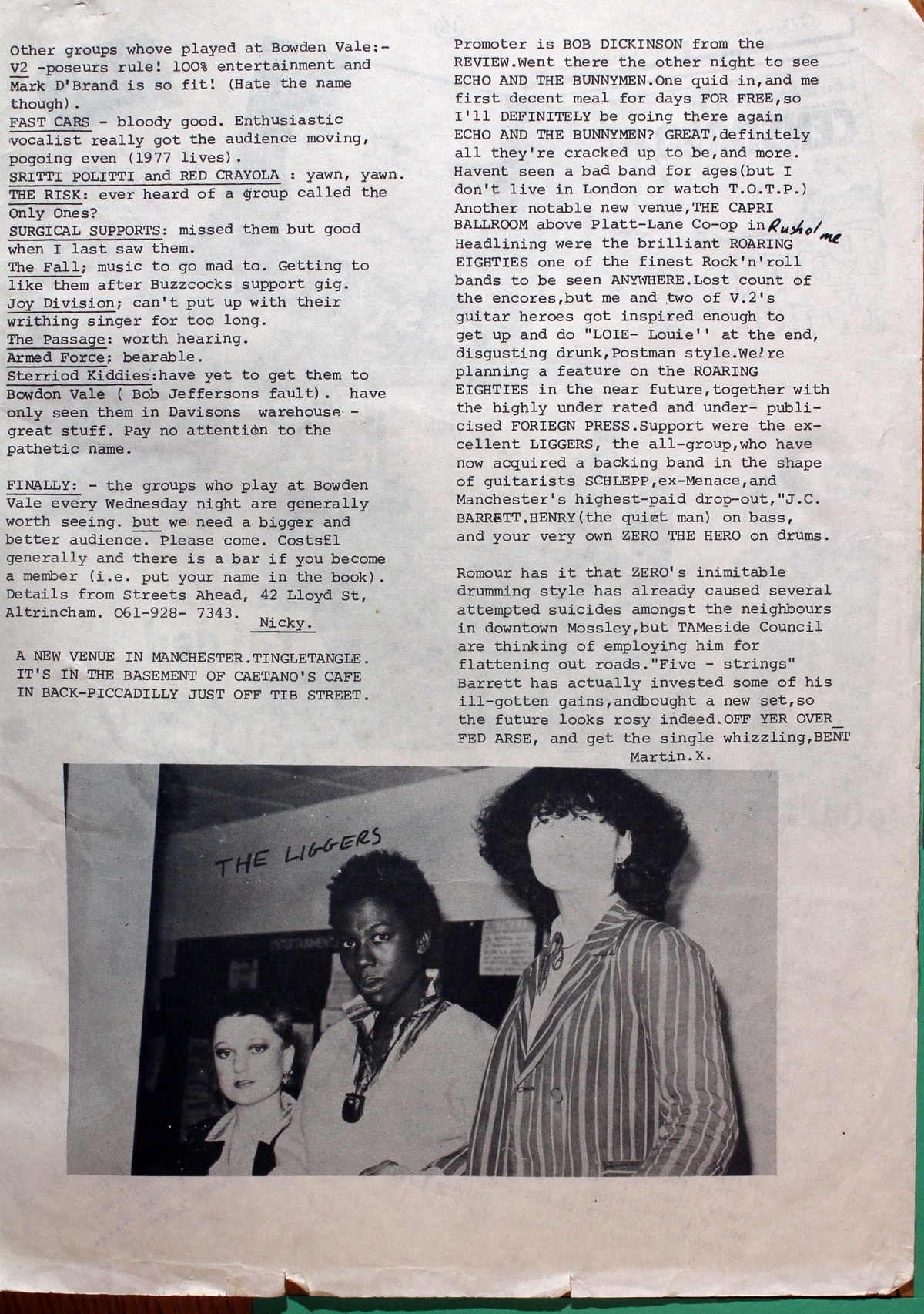 Other groups whove played at Bowden Vale:-
V2 -poseurs rule! 100% entertainment and Mark D'Brand is so fit! (Hate the name though).
FAST CARS - bloody good. Enthusiastic vocalist really got the audience moving, pogoing even (1977 lives).
SRITTI POLITTI and RED CRAYOLA : yawn, yawn.
THE RISK: ever heard of a group called the Only Ones?
SURGICAL SUPPORTS: missed them but good when I last saw them.
The Fall; music to go mad to. Getting to like them after Buzzcocks support gig.
Joy Division: can't put up with their writhing singer for too long.
The Passage: worth hearing.
Armed Force: bearable.
Sterriod Kiddies:have yet to get them to Bowdon Vale ( Bob Jeffersons fault). have only seen them in Davisons warehouse - great stuff. Pay no attention to the pathetic name.
FINALLY: - the groups who play at Bowden Vale every Wednesday night are generally worth seeing. but we need a bigger and better audience. Please come. Costs£1 generally and there is a bar if you become a member (i.e. put your name in the book) . Details from Streets Ahead, 42 Lloyd St, Altrincham. 061-928-7343.
Nicky.
A NEW VENUE IN MANCHESTER. TINGLETANGLE. IT'S IN THE BASEMENT OF CAETANO'S CAFE IN BACK-PICCADILLY JUST OFF TIB STREET.
Promoter is BOB DICKINSON from the REVIEW.Went there the other night to see ECHO AND THE BUNNYMEN.One quid in, and me first decent meal for days FOR FREE,so I'll DEFINITELY be going there again ECHO AND THE BUNNYMEN? GREAT,definitely all they're cracked up to be,and more. Havent seen a bad band for ages(but I don't live in Lonon or watch T.O.T.P.) Another notable new venuw,THE CAPRI BALLROOM above Platt-Lane Co-op in Rusholme Headlining were the brilliant ROARING EIGHTIES one of the finest Rock'n'roll bands to be seen ANYWHERE.Lost count of the encores,but me and two of V.2's guitar heroes got inspired enough to get up and do "LOIE- Louis' ' at the end, disgusting drunk,Postman style.We're planning a feature on the ROARING EIGHTIES in the near future, together with the highly under rated and under- publi-cised FOREIGN PRESS. Support were the excellent LIGGERS, the all-group,who have now acquired a backing band in the shape of guitarist's SCHLEPP,ex-Menace,and Manchester's highest-paid drop-out, "J.C. BARRETT.HENRY(the quiet man) on bass, and your very own ZERO THE HERO on drums.
Romour has it that ZERO's inimitable drumming style has already caused several attempted suicides amongst the neighbours in downtown Mossley,but TAMeside Council are thinking of employing him for flattening out the roads. "Five-strings" Barrett has actually invested some of his ill-gotten gains, andbought a new set, so the future looks rosy indeed. OFF YER OVER_FED ARSE, and get the single whizzling,BENT
Martin.X.