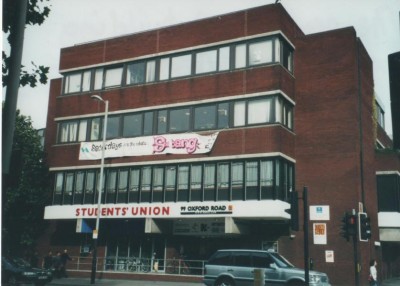 (I took this picture about 2000) This is Mandela House or something like that on Oxford road, it took over from Cavendish House as the Poly students Union. They still used to have the Friday night rock discos although it was a lot more Killing Joke and Southern death Cult. Where as the old Poly was a bit more Clash and Buzzcocks. I suppose time was marching on.
I never really liked it quite as much as the old poly but I still went there 2 or 3 times a week. I even sometimes went to the soul funk night which if memory serves was on a Wednesday and my old mate from his Denton punk days Mick Hucknall was the DJ.
I nearly had another brush with fame when I was in a band called Yukio Tani we somehow wangled a 3rd support gig.
We were told we could play next Thursday or the week after. We jumped at the chance to support Vice Squad who were quite well known in those days and I believe are still going. The band we could have supported the week after were called Culture Club but were complete unknowns at the time. I wonder whatever happened to them
Artefact added : 16th October 2012
by abdom

dubwise-er Says –
Same,same.Definitely not like the old poly.The old poly was a bit of a dump and had "character" whereas this was a brand newbie with 'eavy 'eavy bouncers to keep out the riff raff and oi polloi, therefore if you weren't a student you had to go through the rigmarole of getting some student type from darn sarf or wherever to kindly sign you in...like they'd always done at the university union, but hadn't bothered with at The Cavendish.It definitely changed the atmosphere because there was nowhere near the mixed bag of people and the occasional nutter to spice it up.They did put on good bands though.....and cheap beer;usually in plastic glasses though and sometimes those horrible wobbly ones.
Oh yeah, Yukio Tani...I remember them...In fact if memory serves, for some very odd reason the guitarist in the band asked me would I like to be the singer as the previous one, a certain Muppet, ex Armed Force frontman and general man about town, had done one and the band were obviously desperate as I could barely whistle in the bath,never mind hold a choon,especially such Armed Force classics as "Moss Side My Home Town", "Cancer Ward" and newer ditties I had to try and learn.The practice rooms were called U Turn Studios beneath an old swimming baths in Hyde I think....? Anyway I remember it was f#@kin' freezing!Well after a couple of rehearsals I thought I was getting to grips with this singing in a band malarky and reckoned it was only a matter of time before The Albert Hall and a Royal Variety show beckoned. But I was wrong!Things didn't work out, due to "musical differences" as I recall i.e not being able to sing, as well as trying to throw in the odd Gary Glitter classic double-take look, with a bit of Alvin Stardust's beckoning black glove to add to the flavour....
And so I did the walk of shame and I may or may not have heard a slow hand clap....Well at least I gave it a "red hot go"as the say round these here parts .But it was you Abdom, it was you...I coulda been a contender,I coulda been somebody...etc.
Well I'm sure I didn't make all of it up?Then again......
I'll post up a flyer for Yukio Tani at the Dancing Weasel, don't think it's up here yet....? (Haven't been on here for ages and I've still managed to crap on!No change there then...)

muninman Says –
There were definitely still some nutters there. I remember going to the Friday night discos and a group of skinheads regularly visited and caused mayhem.
From my memory this venue opened around spring 1982 (I lived in Loxford tower virtually opposite at that time).
I saw The Mightly Wah, Bow Wow Wow and a few other bands. Also from memory Culture Club appeared around Christmas 1982 and although they were booked as an unknown act, by the time they appeared they'd had their massive hit and the place was heaving.

Bernie. B Says –
Hey. I’m currently a student at MMU; at the end of this month we are opening an exhibition about the history of the polytechnic. I’m focusing on the role of the union and the events which were held there. If you’d be interested or willing to given any further accounts of your time spent in bands and at the union feel free to get in touch. Twitter @FunkyESmiles
If you'd like to leave a comment, please Login. Login
Manchester Digital Music Archive is licensed under an
Attribution-NonCommercial-ShareAlike 4.0 International License.
Charity no. 1164179
Our archive currently contains 3873 Bands, 759 DJs, 1464 Venues, 323 Industry Professionals and 29799 artefacts contributed by 4063 members.