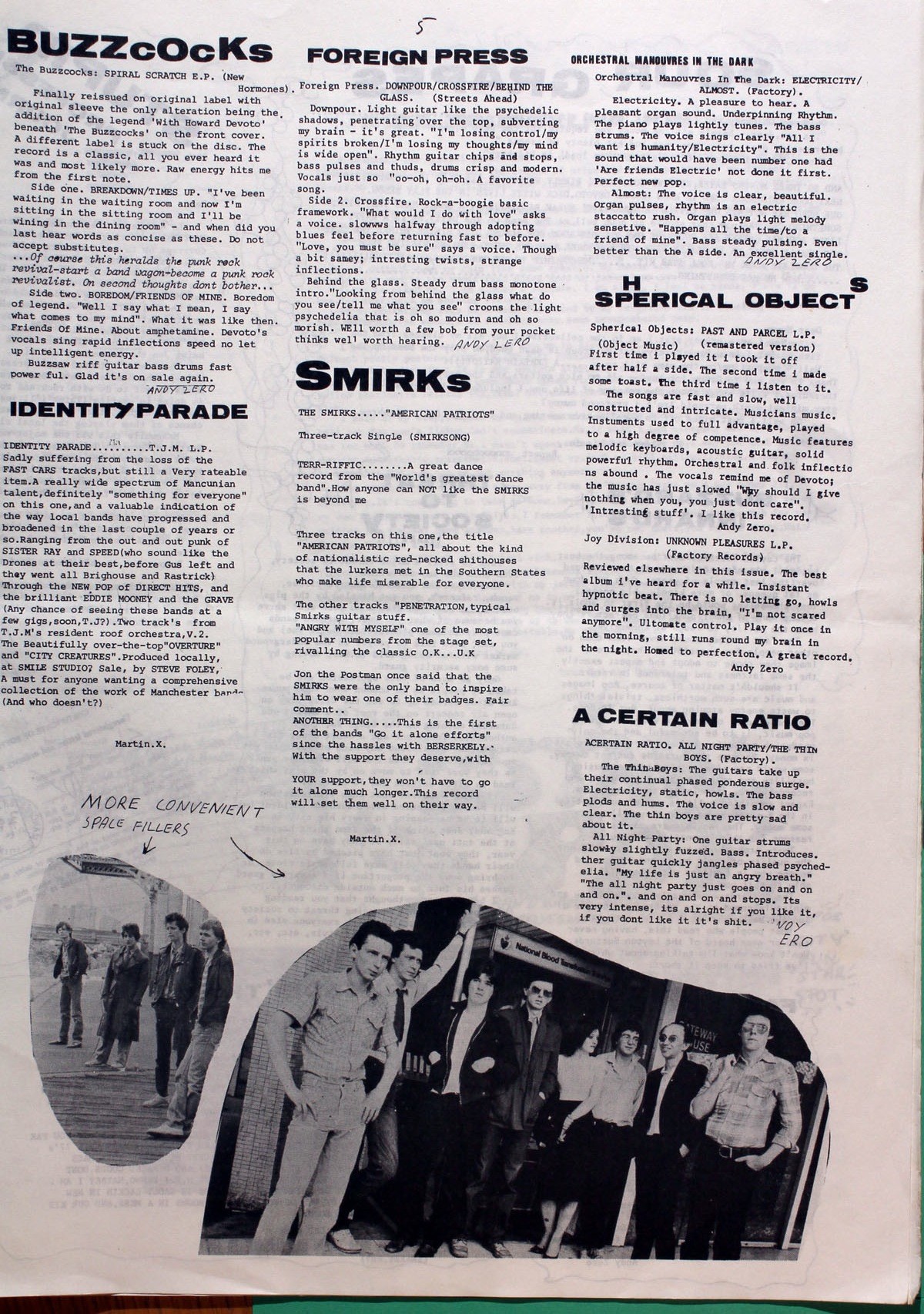 BUZZCOCKS
The Buzzcocks: SPIRAL SCRATCH E.P. (New Hormones)
Finally reissused on original label with original sleeve the only alteration being the addition of the legend 'With Howard Devoto' beneath 'The Buzzcocks' on the front cover. A diffferent label is stuck on the disc. The record is a classic, all you ever heard it was and most likely more. Raw energy hits me from the first note.
Side one. BREAKDOWN/TIMES UP. "I've been waiting in the waiting room and now I'm sitting in the sitting room and I'll be wining in the dining room" - and when did you last hear words as concise as these. Do not accept substitutes.
...Of course this heralds the punk rock revival-start a band wagon-become a punk rock revivalist. On second thoughts don't bother...
Side two. BOREDOM/FRIENDS OF MINE. Boredom of legend. "Well I say what I mean, I say what comes to my mind". What it was like then. Friends of Mine. About amphetamine. Devoto's vocals sing rapid inflections speed no let up intelligent energy.
Buzzsaw riff guitar bass drums fast power ful. Glad it's on sale again.
ANDY ZERO
IDENTITY PARADE
IDENTITY PARADE........T.J.M. L.P.
Sadly suffering from the loss of the FAST CARS tracks,but still a Very rateable item.A really wide spectrum of Mancunian talent, definitely "something for everyone" on this one,and a valuable indication of the way local bands have progressed and broadened in the last couple of years or so.Ranging from the out and out punk of SISTER RAY and SPEED(who sound like the Drones at their best,before Gus left and they went all Brighouse and Rastrick) Through the NEW POP of DIRECT HITS, and the brilliant EDDIE MOONEY and the GRAVE (Any chance of seeing these bands at a few gigs,soon,T.J?) .Two track's from T.J.M's resident roof orchestra,V.2. The Beautifully over-the-top"OVERTURE" and "CITY CREATURES".Produced locally, at SMILE STUDO, Sale, by STEVE FOLEY, A must for anyone wanting a comprehensive collection of the work of Manchester bands (And who doesn't?)
Martin.X.
FOREIGN PRESS
Foreign Press. DOWNPOUR/CROSSFIRE/BEHIND THE GLASS. (Streets Ahead)
Downpour. Light guitar like the psychedelic shadows, penetrating over the top, subverting my brain - it's great. "I'm losing control/my spirits broken/I'm losing my thoughts/my mind is wide open". Rhythm guitar chips and stops, bass pulses and thuds, drums crisp and modern. Vocals just so "oo-oh, oh-oh. A favourite song.
Side 2. Crossfire. Rock-a-boogie basic framework. "What would I do with love" asks a voice. slowws halfway through adopting blues feel before returning fast to before. "Love, you must be sure" says a voice. Though a bit samey; interesting twists, strange inflections.
Behind the glass. Steady drum bass monotone intro."Looking from behind the glass what do you see/tell me what you see" croons the light psychedelia that is so modurn and oh so morish. WEll worth a few bob from your pocket things well working hearing.
ANDY ZERO
SMIRKS
THE SMIRKS...."AMERICAN PATRIOTS"
Three-track Single (SMIRKSONG)
TERR-RIFFIC....A great dance record from the "World's greatest dance band".How anyone can NOT like the SMIRKS is beyond me
Three tracks on this one, the title "AMERICAN PATRIOTS", all about the kind of nationalistic red-necked shithouses that the lurkers met in the Southern States who make life miserable for everyone.
The other tracks "PENETRATION,typical Smirks guitar stuff.
"ANGRY WITH MYSELF" on of the most popular numbers from the stage set, rivalling the classic O.K....U.K.
Jon the Postman once said that the SMIRKS were the only band to inspire him to wear one of their badges. Fair comment...
ANOTHER THING....This is the first of the bands "Go it alone efforts" since the hassles with BESERKELEY. With the support they deserve, with YOUR support they won't have to go it alone much longer.This record will set them well on their way.
Martin.X.
ORCHESTRAL MANOUVRES IN THE DARK
Orchestral Manouvres In The Dark: ELECTRICITY/ALMOST. (Factory).
Electricity. A pleasure to hear. A pleasant organ sound. Underpinning Rhythm. The piano plays lightly tunes. The bass strums. The voice sings clearly "All I want is humanity/Electricity". This is the sound that would have been number one had 'Are friends Electric' not done it first. Perfect new pop.
Almost: The voice is clear, beautiful. Organ pulses, rhythm is an electric staccatto rush. Organ plays light melody sensetive. "Happens all the time/to a friend of mine". Bass steady pulsing. Even better than the A side. An excelleng single.
ANDY ZERO
SPHERICAL OBJECTS
Spherical Objects: PAST AND PARCEL L.P. (remastered version) (Object Music)
First time i played it i took it off after half a side. The second time i made some toast. The third time i listen to it.
The songs are fast and slow, well constructed and intricate. Musicians music. Instruments used to full advantage, played to a high degree of competence. Music features melodic keyboards, acoustic guitar, solid powerful rhythm. Orchestral and folk inflections abound. The vocals remind me of Devoto; the music has just slowed "Why should I give nothing when you, you just dont care". 'Interesting stuff'. I like this record.
Andy Zero.
Joy Division: UNKNOWN PLEASURES L.P. (Factory Records)
Reviewed elsewhere in this issue. The best album I've heard for a while. Insistant hypnotic beat. There is no letting go, howls and surges into the brain, "I'm not scared anymore". Ultomate control. Play it once in the morning, still runs round my brain in the night. Honed to perfection. A great record.
Andy Zero
A CERTAIN RATIO
ACERTAIN RATIO. ALL NIGHT PARTY/THE THIN BOYS. (Factory).
The Thin Boys: The guitars take up their continual phased ponderous surge. Electricity, static, howls. The bass plods and hums. The voice is slow and clear. The thin boys are pretty sad about it.
All NIght Party: One guitar strums slowly slightly fuzzed. Bass. Introduces ther guitar quickly jangles phased psyched-elia. "My life is just an angry breath." "The all night party just goes on and on and on.". and on and on and stops. Its very intense, its alright if you like it, if you dont like it it's shit.
ANDY ZERO