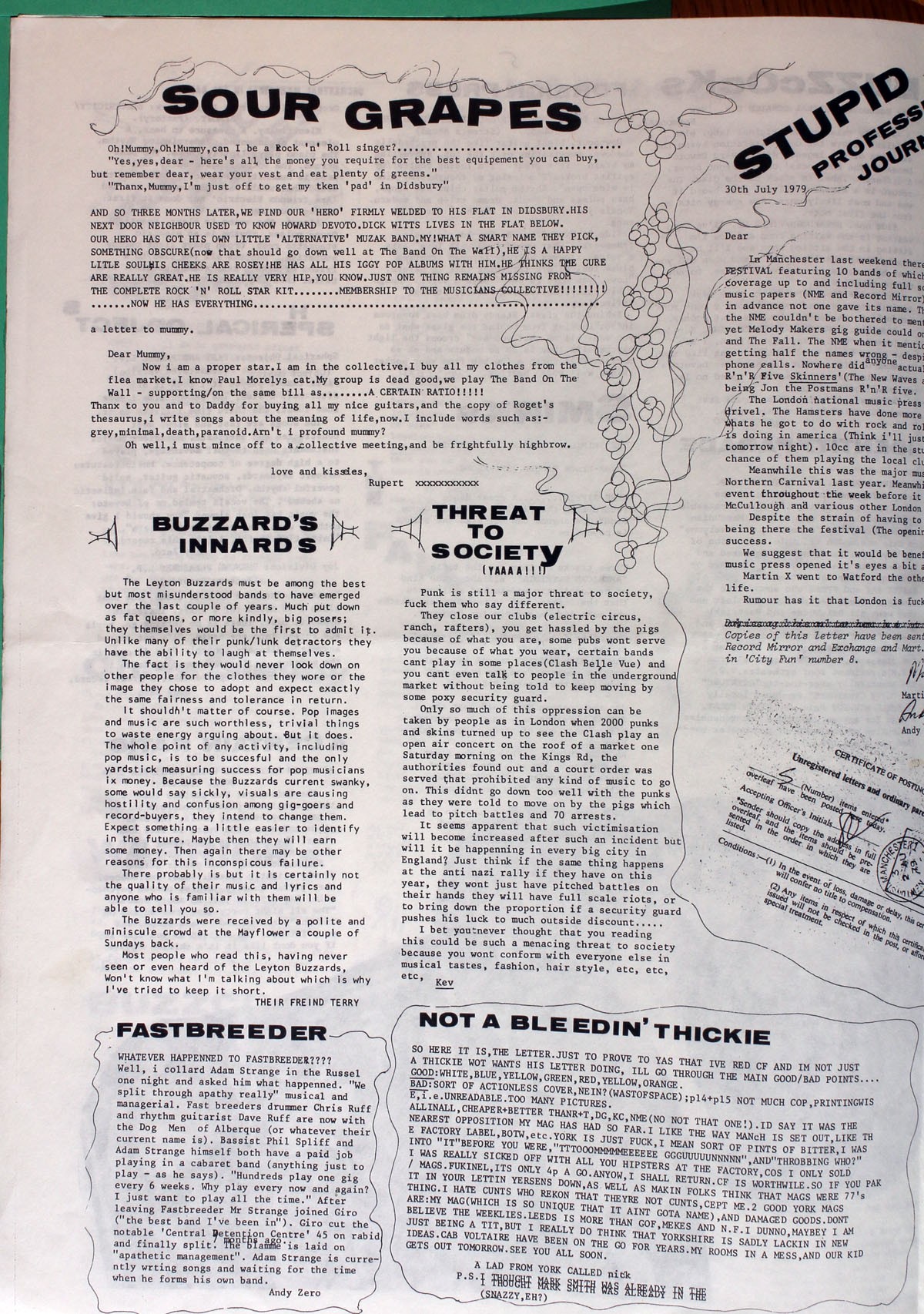 STUPID PROFESSIONAL JOURNALISTS
30th July 1979
c/o (Address redacted)
Dear
In Manchester last weekend there was a STUFF THE SUPERSTARS SPECIAL FESTIVAL featuring 10 bands which have had favorable national press coverage up to and including full s [obscured] feature articles. Of the two music papers (NME and Record Mirror) that even bothered mentioning this event in advance not one gave its name. This was a STUFF THE SUPERSTARS, yet the NME couldn’t be bothered to mention half the (lesser known) bands, yet Melody Makers gig guide could only be bothered to mention Joy Division and The Fall. The NME when it mentioned the event at all succeeded in getting half the names wrong – despite accurate press releases and several phone calls. Nowhere did anyone actual [obscured] int ‘Jon the Postmans Psychedelic R’n’R Five Skinners’ (The New Waves [obscured] to the Temperance 7), the closest being Jon the Postmans R’n’R five.
The London national music press [obscured] to fill it’s pages with domestic drivel. The Hamsters have done more [obscured] this year than Keith Richard so whats he got to do with rock and roll? Who gives a fuck what Todd Rundgren is doing in america (Think I’ll just [obscured] over to New York for his gig tomorrow night). 10cc are in the studio until next february so fat fucking chance of them playing the local clubs.
Meanwhile this was the major music event in Manchester since the Northern Carnival last year. Meanwhile, John Peel consistently plugged the event throughout the week before it took place. Meanwhile Moreley, Penman, McCullough and various other London [obscured] Vultures decided to turn up.
Despite the strain of having to [obscured] the doors without Anita Pallenburgh being there the festival (The opening [obscured] of THE FUNHOUSE) was a roaring success.
We suggest that it would be beneficial to music in general if the London music press opened it’s eyes a bit and shook itself up.
Martin X went to Watford the other week and couldn’t find any signs of life.
Rumour has it that London is fucked. Manchester waits.
[italics]
Copies of this letter have been sent to N.M.E. Sounds, Melody Maker, Record Mirror and Exchange and Mart. This letter is being printed in full in’City Fun’ number 8.
[signed]
Martin X (City Fun)
Andy Zero (The Liggers, City Fun, The Funhouse)

David Wilkinson Says –
â€˜Sour Grapesâ€™ is a satire of the Manchester Musiciansâ€™ Collective becoming an elitist clique: â€œDear mummy...now I am a proper star...I know Paul Morleyâ€™s catâ€. Itâ€™s a great example of one of City Funâ€™s best features, which was the way it brought together political commitment with irreverent countercultural humour, warding off any accusations of joyless leftist puritanism. Itâ€™s also a sign of the fanzineâ€™s influence over the scene â€“ see Vol. 1 No. 18 for the MMC communiqu which reads â€œtimes have changed. The Collective is your Collective...just like City Fun is your paper.â€
If you'd like to leave a comment, please Login. Login
Manchester Digital Music Archive is licensed under an
Attribution-NonCommercial-ShareAlike 4.0 International License.
Charity no. 1164179
Our archive currently contains 3873 Bands, 759 DJs, 1464 Venues, 323 Industry Professionals and 29799 artefacts contributed by 4065 members.