The Durutti Column, The Nosebleeds
Photograph
1976 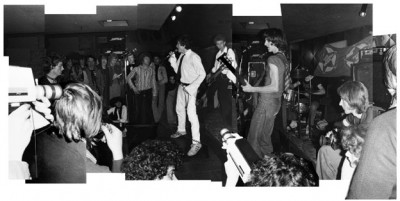 Here's a great panoramic picture of the Nosebleeds a band featuring Ed Banger and Vini Reilly. The photographs were taken at an Anti Nazi gig in 1977 in Bury. The gig was filmed (see camera on the right of the photo) by Bob Jones and John Crumpton (who also took these photographs). The film was virtually forgotten about until 2004 when John Crumpton went to the MDMArchive launch at Urbis.
John says "The streets of Wythenshawe’s council estate produced two of Manchester’s highest energy punk bands. Slaughter & the Dogs and Ed Banger and the Nosebleeds. We’d been fortunate in recording both groups in a seminal concert, at the Forum Wythenshawe in September1976. The Dogs were headlining and well down the bill were the local heavy rock combo- Wild Ram. We spoke to them after the gig and they were all very friendly. I’d lived in Woodhouse Park for 12 years so we struck up a good rapport.

Within a few weeks they’d changed their name to The Nosebleeds as the punk rock scene gained momentum and it appeared that fame and fortune awaited anyone who had enough balls to grab it. So for the next nine months or so we videotaped gigs at Rafters, Manchester, Rock Against Racism dates in Bury and elsewhere and recorded interviews with band members in between. The drummer Toby was the most communicative and gave us a history of the group’s formation on camera.

The portapak camera was there on the day the band went to Granada TV studios to record their celebrated debut appearance, (there weren’t to be any others), on the early evening Regional magazine programme, Granada Reports. Lead singer Ed Banger jokingly manhandled presenter and champion of Punk/New Wave Tony Wilson during the performance of their one and only single ‘(I) Ain’t bin to no music school’.

We weren’t allowed to film in the studios as the performance was taking place so had to settle for filming the performance off the domestic TV screen in Vini Faal’s front room.

Whether such opportunities exist for a present day bunch of working class lads from Wythenshawe to have their 15 minutes seems highly questionable in the era of ITV without its regional connections and the increasing sanitization of rock music through the dull, blandness of Pop Idol and Fame Academy.

Unfortunately the band weren’t able to capitalise on their brief moment in the spotlight and their failure to make money created further tensions. Without success they carried on regardless but the splits within the group were ever widening.

Ed Banger and Vini Faal, the manager were the most forthright in voicing their opinions as to what had been happening with the group’s finances. With the exception of Vini Reilly who lived in upmarket Didsbury, the rest were Wythenshawe born and bred and more used to settling matters in a John Prescott way. In fact when Ed turned up for his interview he was sporting a black eye, the result of a ‘frank exchange of views’ with his manager and was more than willing to spill the beans. As always conflict is a mainstay of all forms of story-telling.

We cross-cut between the delusional Vini and disillusioned Ed, each shouting the odds about the other’s shortcomings and finally we see Vini Faal, after the band’s split, content to hold onto Toby and Pete and heralding a new venture with a new guy ‘I’ve got my eye on’ and maintaining the Nosebleeds would rise again from the ashes.

They did. I heard only recently that the ‘new guy’ was none other than Stephen Morrissey, later the Smith’s frontman. He joined the band briefly as Ed’s replacement following his and Vini Reilly’s departure- the latter to be the most successful of the ex-Nosebleeds with his group Durutti Column and numerous solo albums- a guitarist touched by genius in my view.

The linear editing, by Bob and myself of the accumulated 7 hours worth of material we’d shot took ages. Even now, all these years later, remembering the primitiveness of the technology brings me out in a cold sweat.

We had 2 tape machines, the right hand ‘record’ deck for assembling the shots in edited order and the left hand ‘source’ deck which shuttled the tape backward and forward to locate the next shot for insertion.

To further slow things down there wasn’t even an edit controller so we devised a Heath Robinson system of stop watches, 10 second rewinds and countdowns and pressing of the edit button at precisely the right moment for the edit to take place. God, it was a laborious business and rarely went according to plan.

Still we plodded on over many evenings, Bob and I were good friends and the material itself kept our spirits up as it possessed a humour, irony and honesty not often seen in a documentary of pre-Spinal Tap vintage.

The final running time was about 40 minutes and we screened it a few times as part of the workshop’s presentations and it always went down well with audiences, although I’d be surprised if the total number of viewers has ever reached three figures.

In the early 80’s more sophisticated video formats were becoming available so we transferred the tape to a lo-band U-matic cassette in 1982. In a box, half-forgotten/half remembered, it’s been hauled around from loft to loft in the various house moves over the years."

The film finally got it's first public screening at The King's Arms, Salford at an MDMArchive film event.
Artefact added : 5th June 2007
by Abigail

johnMC Says –
Is the Nosebleeds' video available for a view?
I found the 7' single in Edinburgh in 1980 - recognised Vin on the cover so I picked it up.
I'd love to see the vid
please lemme know
If you'd like to leave a comment, please Login. Login
Manchester Digital Music Archive is licensed under an
Attribution-NonCommercial-ShareAlike 4.0 International License.
Charity no. 1164179
Our archive currently contains 3734 Bands, 739 DJs, 1424 Venues, 260 Industry Professionals and 27890 artefacts contributed by 3853 members.