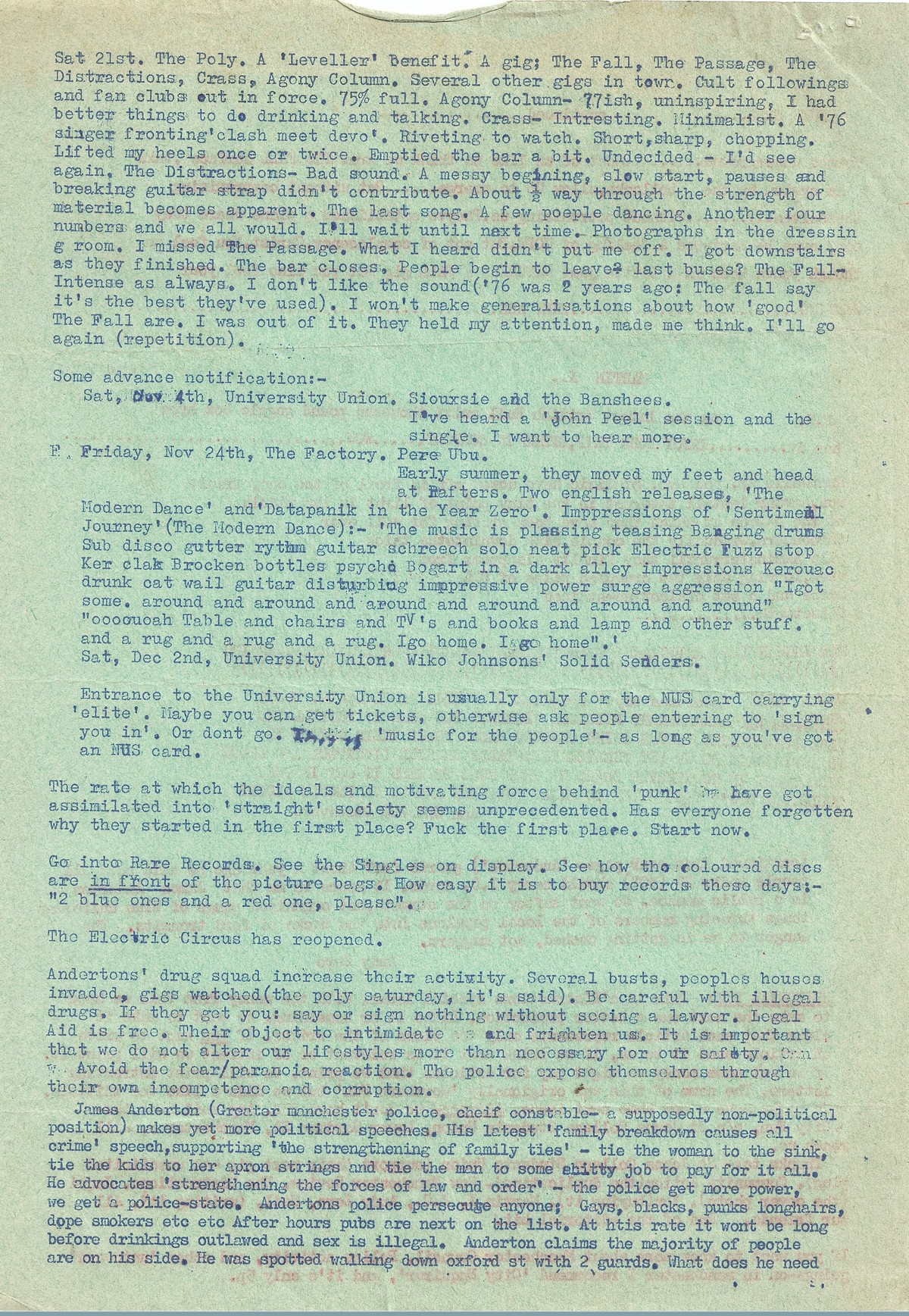 Sat 21st. The Poly. A ‘Leveller’ benefit. A gig; The Fall, The Passage, The Distractions, Crass, Agony Column. Several other gigs in town. Cult followings and fan clubs out in force. 75% full. Agony Column – 77ish, uninspiring, I had better things to do drinking and talking. Crass- interesting. Minimalist. A ’76 singer fronting ‘clash meets devo’. Riveting to watch. Short, sharp, chopping. Lifted my heels once or twice. Emptied the bar a bit. Undecided – I’d see again. The Distractions- Bad sound. A messy beginning, slow start, pauses and breaking guitar strap didn’t contribute. About ½ way through the strength of material becomes apparent. The last song. A few people dancing. Another four numbers and we all would. I’ll wait until next time. Photographs in the dressing room. I missed The Passage. What I heard didn’t put me off. I got downstairs as they finished. The bar closes. People begin to leave- last buses? The Fall- Intense as always. I don’t like the sound ( ’76 was 2 years ago: The fall say it’s the best they’ve used). I won’t make generalisations about how ‘good’ The Fall are. I was out of it. They held my attention, made me think. I’ll go again (repetition).

Some advance notification:-
Sat, Nov 4th, University Union. Siouxsie and the Banshees.
I’ve heard a ‘John Peel’ session and the single. I want to hear more.
F. Friday, Nov 24th, The Factory. Pere Ubu.
Early Summer, they moved my feet and head at Rafters. Two english releases, ‘The Modern Dance’ and’Datapanik in the Year Zero’. Imppressions of ‘Sentimell Journey’ (The Modern Dance):- ‘The music is plassing teasing Banging drums Sub disco gutter rythm guitar schreech solo neat pick Electric Fuzz stop Ker clack Brocken bottles psycho Bogart in a dark alley impressions Kerouac drunk cat wail guitar disturbing impressive power surge aggression “Igot some. around and around and around and around and around” “ooouoah Table and chairs and TV’s and books and lamp and other stuff. and a rug and a rug and a rug. Igo home. I go home”.’
Sat, Dec 2nd, University Union. Wilko Johnsons’ Solid Senders

Entrance to the University Union is usually only for the NUS card carrying ‘elite’. Maybe you can get tickets, otherwise ask people entering to ‘sign you in’. Or don’t go. This is ‘music for the people’- as long as you’ve got an NUS card.

The rate at which the ideals and motivating force behind ‘punk’ have got assimilated into ‘straight’ society seems unprecedented. Has everyone forgotten why they started in the first place? Fuck the first place. Start now.

Go into Rare Records. See the singles on display. See how the coloured discs are in front of the picture bags. How easy it is to buy records these days:- “2 blue ones and a red one, please”.

The Electric Circus has reopened.

Andertons’ drug squad increase their activity. Several busts, peoples houses invaded, gigs watched (the poly Saturday, it’s said). Be careful with illegal drugs. If they get you: say or sign nothing without seeing a lawyer. Legal Aid is free. Their object is to intimidate us and frighten us. It is important that we do not alter our lifestyles more than necessary for our safety. Avoid the fear/paranoia reaction. The police expose themselves through their own incompetence and corruption.
James Anderton (Greater Manchester police, cheif constable- a supposedly non-political position) makes yet more political speeches. His latest ‘family breakdown causes all crime’ speech, supporting ‘the strengthening of family ties’ – tie the women to the sink, tie the kids to her apron strings and tie the men to some shitty job to pay for it all. He advocates ‘strengthening the forces of law and order’ – the police get more power, we get a police-state. Andertons police persecute anyone; Gays, blacks, punks longhairs, dope smokers etc etc After hours pubs are next on the list. At htis rate it won’t be long before drinkings outlawed and sex is illegal. Anderton claims the majority of people are on his side. He was spotted walking down oxford st with 2 guards. What does he need

Dave Haslam Says –
The next page describes Anderton as "a public menace" and warns of his "gangs of blue uniformed thugs".
If you'd like to leave a comment, please Login. Login
Manchester Digital Music Archive is licensed under an
Attribution-NonCommercial-ShareAlike 4.0 International License.
Charity no. 1164179
Our archive currently contains 3870 Bands, 758 DJs, 1461 Venues, 323 Industry Professionals and 29722 artefacts contributed by 4048 members.