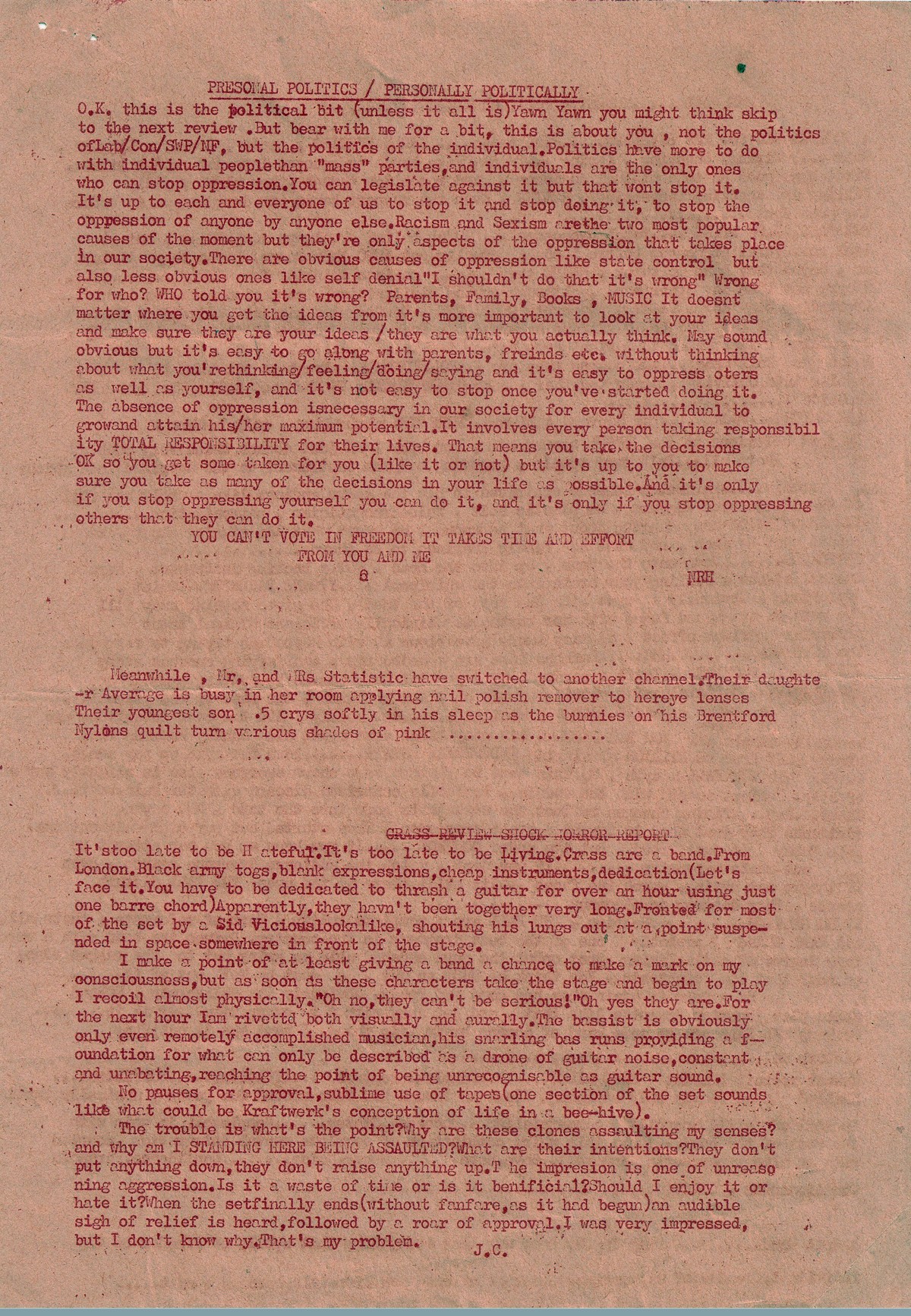 PRESONAL POLITICS/PERSONALLY POLITICALLY
O.K. this is the political bit (unless it all is)Yawn Yawn you might think skip to the next review .But bear with me for a bit, this is about you , not the politics ofLab/Con/SWP/NF, but the politics of the individual.Politics have more to do with individual peoplethan “mass” parties,and individuals are the only ones who can stop oppression.You can legislate against it but that won’t stop it. It’s up to each and every one of us to stop it and stop doing it, to stop the oppression of anyone by anyone else.Racism and Sexism arethe two most popular causes of the moment but they’re only aspects of the oppression that takes place in our society.There are obvious causes of oppression like state control but also less obvious ones like self denial”I shouldn’t do that it’s wrong” Wrong for who? WHO told you it’s wrong? Parents, Family, Books, MUSIC It doesnt matter where you got the ideas from it’s more important to look at your ideas and make sure they are your ideas / they are what you actually think. May sound obvious but it’s easy to go along with parents, freinds etc. without thinking about whatyou’re thinking/feeling/doing/saying and it’s easy to oppress oters as well as yourself, and it’s not easy to stop once you’ve started doing it. The absence of oppression isnecessary in our society for every individual to growand attain his/her maximum potential. It involves every person taking responsibility TOTAL RESPONSIBILITY for their lives. That means you take the decisions OK so you get some taken for you (like it or not) but it’s up to you to make sure you take as many of the decisions in your life as possible.And it’s only if you stop oppressing yourself you can do it, and it’s only if you stop oppressing others that they can do it.
YOU CAN’T VOTE IN FREEDOM IT TAKES TIME AND EFFORT FROM YOU AND ME
NRH

Meanwhile , Mr, and Mrs Statistic have switched to another channel. The Daughter Average is busy in her room applying nail polish to hereye lenses Their youngest son .5 crys softly in his sleep as the bunnies on his Brentford Nylons quilt turn various shades of pink………………..

CRASS REVIEW SHOCK HORROR REPORT
It’stoo late to be Hateful.It’s too late to be Living.Crass are a band.From London.Black army togs, blank experessions,cheap instruments,dedication(Let’s face it. You have to be dedicated to thrash a guitar for over an hour using just one barre chord)Apparently they havn’t been together very long. Fronted for most of the set by a Sid Viciouslookalike, shouting his lungs out at a point suspended in space somewhere in front of the stage.
I make a point of at least giving a band a chance to make a mark on my consciousness, but as soon as these characters take the stage and begin to play I recoil almost physically. ”Oh no, they can’t be serious!”Oh yes they are.For the next hour Iam rivettd both visually and aurally.The bassist is obviously only even remotely accomplished musician,his snarling bas runs providing a foundation for what can only be described as a drone of guitar noise,constant and unabating,reaching the point of being unrecognisable as guitar sound.
No pauses for approval,sublime use of tapes(one section of the set sounds like what could be Kraftwerk’s conception of life in a bee-hive).
The trouble is what’s the point?Why are these clones assaulting my senses? and why am I STANDING HERE BEING ASSAULTED?What are their intentions?They don’t put anything down, they don’t raise anything up. The impression is one of unreasoning aggression.Is it a waste of time or is it beneficia1?Should I enjoy it or hate it?When the set finally ends(without fanfare,as it had begun)an audible sigh of relief is heard,followed by a roar of approval.I was very impressed, but I don’t know why.That’s my problem
J.C.

Dave Haslam Says –
Crass were always a 'City Fun' favourite band, and the band played at least one benefit to riase cash for the fanzine. Note also the desire to get political even in this first issue of the fanzine. In many ways 'City Fun' was more a direct descendant of 'Mole Express' and other Manchester alternative/radical underground papers from the early 1970s than from 'Sniffin Glue' and the classic punk zines.
If you'd like to leave a comment, please Login. Login
Manchester Digital Music Archive is licensed under an
Attribution-NonCommercial-ShareAlike 4.0 International License.
Charity no. 1164179
Our archive currently contains 3816 Bands, 743 DJs, 1437 Venues, 298 Industry Professionals and 28661 artefacts contributed by 3925 members.