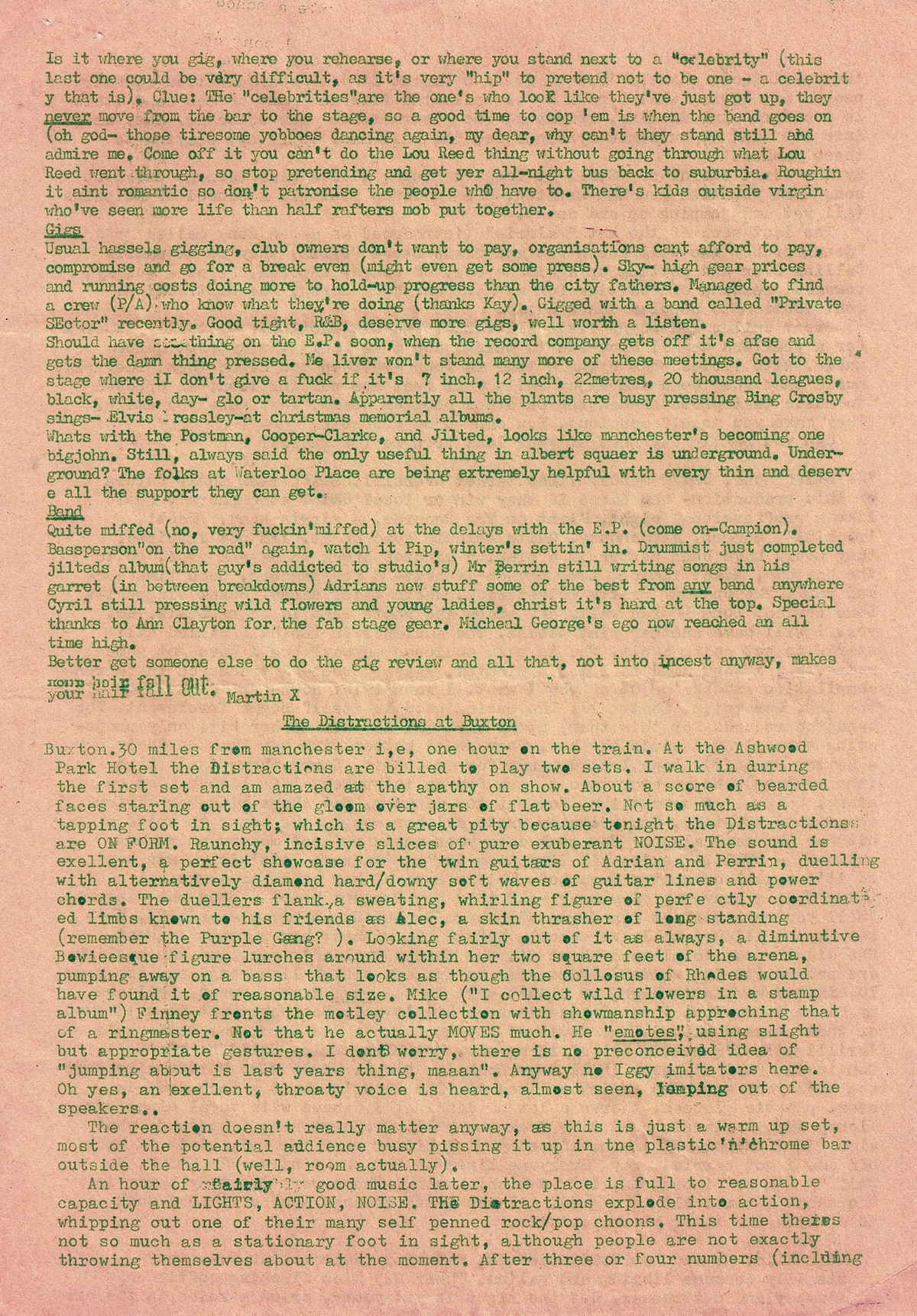 Is it where you gig, where you rehearse, or where you stand next to a “celebrity” (this last one could be very difficult, as it’s very “hip” to pretend not to be one – a celebrity that is). Clue: THe “celebrities”are the one’s who look like they’ve just got up, they never move from the bar to the stage, so a good time to cop ‘em is when the band goes on (oh god – those tiresome yobboes dancing again, my dear, why can’t they stand still and admire me. Come off it you can’t do the Lou Reed thing without going through what Lou Reed went through, so stop pretending and get yer all-night bus back to suburbia. Roughin it ain’t romantic so don’t patronise the people who have to. There’s kids outside virgin who’ve seen more life than half rafters mob put together.
Gigs
Usual hassels gigging, club owners don’t want to pay, organisations cant afford to pay, compromise and go for a break even (might even get some press). Sky-high gear prices and running costs doing more to hold-up process than the city fathers. Managed to find a crew (P/A) who know what they’re doing (thanks Kay). Gigged with a band called “Private Sector” recently. Good tight, R&B, deserve more gigs, well worth a listen.
Should have something on the E.P. soon, when the record company gets off it’s afse and gets the damned thing pressed. Me liver won’t stand any more of these meetings. Got to the stage where iI don’t give a fuck if its 7 inch, 12 inch, 22metres, 20 thousand leagues, black, white, day- glo or tartan. Apparently all the plants are busy pressing Bing Crosby sings- Elvis Presley-at christmas memorial albums.
Whats with the Postman, Cooper-Clarke, and Jilted, looks like manchester’s becoming one bigjohn. Still, always said the only useful thing in albert squaer is underground. Underground? The folks at Waterloo Place are being extrememly helpful with every thin and deserve all the support they can get.
Band
Quite miffed (no, very fuckin’miffed) at the delays with the E.P. (come on-Campion). Bassperson “on the road” again, watch it Pip, winter’s settin’ in. Drummist just completed jilteds album(that guy’s addicted to studio’s) Mr Perrin still writing songs in his garrett (in-between breakdowns) Adrians new stuff some of the best from any band anywhere Cyril still pressing wild flowers and young ladies, christ it’s hard at the top. Special thanks to Ann Clayton for the fab stage gear. Micheal George’s ego now reached an all time high.
Better get someone else to do the gig review and all that, not that into incest anyway, makes your hair fall out.
Martin X

The Distractions at Buxton
Buxton. 30 miles from manchester i.e. one hour on the train. At the Ashwood Park Hotel the Distractions are billed to play two sets. I walk in during the first set and am amazed at the apathy on show. About a score of bearded faces staring out of the gloom over jars of flat beer. Not so much as a tapping foot in sight; which is a great pity because tonight the Distractions are ON FORM. Raunchy, incisive slices of pure exuberant NOISE. The sound is exellent, a perfect showcase for the twin guitars of Adrian and Perrin duelling with alternatively diamond hard/downy soft waves of guitar lines and power chords. The duellers flank a sweating, whirling figure of perfectly coordinated limbs known to his friends as Alec, a skin thrasher of long standing (remember the Purple Gang? ). Looking fairly out of it as always, a diminutive Bowieesque figure lurches around within her two square feet of the arena, pumping away on a bass that looks as though the Collosus of Rhodes would have found it of reasonable size. Mike (“I collect wild flowers in a stamp album”) Finney fronts the motley collection with showmanship approaching that of a ringmaster. Not that he actually MOVES much. He “emotes”, using slight but appropriate gestures. I don’t worry, there is no preconceived idea of “jumping about is last year’s thing, maaan”. Anyway no Iggy imitators here. Oh yes, an exellent, throaty voice is heard, almost seen, leaping out of the speakers…
The reaction doesn’t really matter anyway, as this is just a warm up set, most of the potential audience busy pissing it up in the plastic’n’chrome bar outside the hall (well, room actually).
An hour of fairly good music later, the place is full to reasonable capacity and LIGHTS, ACTION, NOISE. THE Distractions explode into action, whipping out one of their many self penned rock/pop choons. This time theres not so much as a stationary foot in sight, although people are not exactly throwing themselves about at the moment. After three or four numbers (including

Dave Haslam Says –
Live review of the Distractions. Martin X - on the fanzinee's prime-movers - was their manager. Pip Nicholls of the band is the "cover star" of the first issue.
If you'd like to leave a comment, please Login. Login
Manchester Digital Music Archive is licensed under an
Attribution-NonCommercial-ShareAlike 4.0 International License.
Charity no. 1164179
Our archive currently contains 3816 Bands, 743 DJs, 1437 Venues, 298 Industry Professionals and 28661 artefacts contributed by 3925 members.