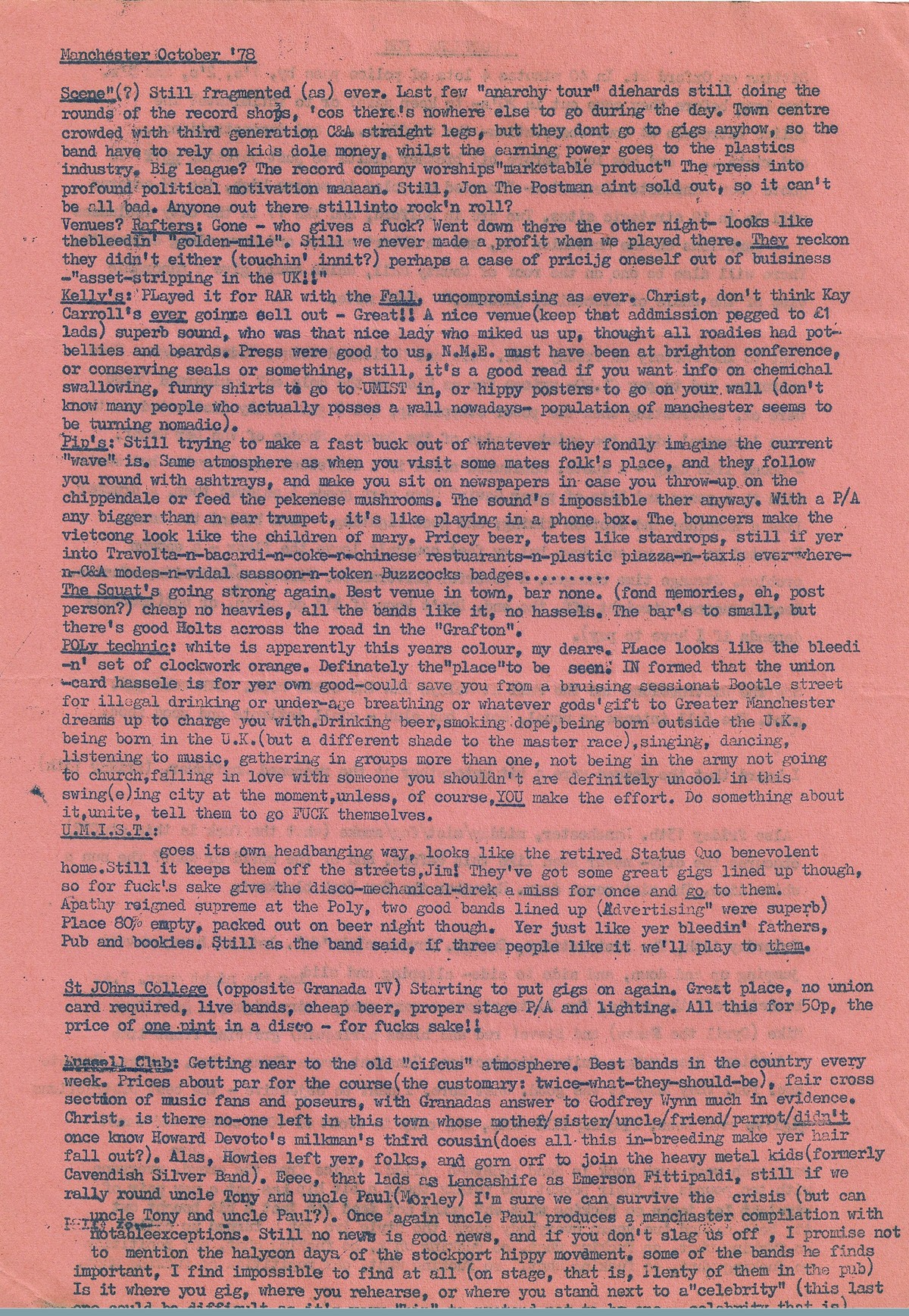 Manchester October ‘78
Scene” (?) Still fragmented (as) ever. Last few “anarchy tour” diehards still doing the rounds of the record shops, ‘cos there’s nowhere else to go during the day. Town centre crowded with third generation C&A straight legs, but they don’t go to gigs anyhow, so the band have to rely on kids dole money, whilst the earning power goes to the plastics industry. Big league? The record company worships”marketable product” The press into profound political motivation maaaan. Still, Jon the Postman ain’t sold out, so it can’t all be bad. Anyone out there stillinto rock’n roll?
Venues? Rafters: Gone – who gives a fuck? Went down there the other night- looks like thebleedin’ “golden-mile”. Still we never made a profit when we played there. They reckon they didn’t either (touchin’ innit?) perhaps a case of pricijg oneself out of business –“asset-stripping in the UK!!”
Kelly’s: PLayed it for RAR with the Fall, uncompromising as ever, Christ, don’t think Kay Carroll’s ever goinna sell out – Great!! A nice venue(keep that admission pegged to £1 lads) superb sound, who was that nice lady who miked us up, thought all roadies had pot-bellies and beards. Press were good to us, N.M.E. must have been at brighton conference, or conserving seals or something, still, it’s a good read if you want info on chemichal swallowing, funny shirts to go to UMIST in, or hippy posters to go on your wall (don’t know many people who actually posses a wall nowadays- population of Manchester seems to be turning nomadic).
Pip’s: Still trying to make a fast buck out of what they fondly imagine the current “wave” is. Same atmosphere as when you visit some mates folk’s place, and they follow you round with ashtrays, and make you sit on newspapers in case you throw-up on the Chippendale or feed the pekenese mushrooms. The sound’s impossible ther anyway. With a P/A any bigger than an ear trumpet, it’s like playing in a phone box. The bouncers make the vietcong look like the children of mary. Pricey beer, tates like stardrops, still if yer into Travolta-n-bacardi-n-coke-n-chinese restaurants-n-plastic piazza-n-taxis everywhere-n-C&A modes-n-vidal Sassoon-n-token Buzzcocks badges……..
The Squat’s going strong again. Best venue in town, bar none. (fond memories, eh, post person?) cheap no heavies, all the bands like it, no hassels. The bar’s to small, but there’s good Holts across the road in the “Grafton”.
POLy technic: white is apparently this years colour, my dears. PLace looks like the bleedin’ set of clockwork orange. Definately the”place”to be seen. IN formed that the union-card hassle is for yer own good-could save you from a bruising sessionat Bootle street for illegal drinking or under-age breathing or whatever god’s gift to Greater Manchester dreams up to charge you with.Drinking beer, smoking dope, being born outside the U.K., being born in the U.K.(but a different shade to the master race) , singing, dancing, listening to music, gathering in groups more than one, not being in the army not going to church,falling in love with someone you shouldn’t are definitely uncool in this swing(e)ing city at the moment,unless, of course ,YOU make the effort. Do something about it,unite, go tell them to FUCK themselves.
U.M.I.S.T.: goes its own headbanging way, looks like the retired Status Quo benevolent home.Still it keeps them off the streets,Jim! They’ve got some great gigs lined up though, so for fuck’s sake give the disco-mechanical-drek a miss for once and go to them. Apathy reigned supreme at the Poly, two good bands lined up (“Advertising” were superb) Place 80% empty, packed out on beer night, though. Yer just like yer bleedin’ fathers, Pub and bookies. Still as the band said, if three people like it we’ll play to them.

St JOhns College (opposite Granada TV) Starting to put gigs on again. Great place, no union card required, live bands, cheap beer, proper stage P/A and lighting. All the for 50p, the price of one pint in a disco – for fuck’s sake!!

Russell Club: Getting near to the old “circus” atmosphere. Best bands in the country every week. Prices about par for the course (the customary: twice-what-they-should-be), fair cross section of music fans and poseurs, with Granadas answer to Godfrey Wynn much in evidence. Christ, is there no-one left in this town whose mother/sister/uncle/friend/parrot/didn’t once know Howard Devoto’s milkman’s third cousin(does all this in-breeding make yer hair fall out?). Alas Howies left yer, folks, and gorn orf to join the heavy metal kids(formerly Cavendish Silver Band). Eee, that lads as Lancashire as Emerson Fittipaldi, still if we rally round uncle Tony and uncle Paul(Morley) I’m sure we can survive the crisis (but can uncle Tony and uncle Paul?). Once again uncle Paul produces a manchester compilation with notableexceptions. Still no news is good news, and if you don’t slag us off, I promise not to mention the halcyon days of the stockport hippy movement. some of the bands he finds important, I find impossible to find at all (on stage that is, llenty of them in the pub) Is it where you gig, where you rehearse, or where you stand next to a”celebrity” (this last one could be difficult TEXT CROPPED OFF BOTTOM OF IMAGE OR PAGE celebrity that is).

Dave Haslam Says –
List of decent Manchester venues announces (very prematurely!) the closure of Rafters, and declares the Squat the best venue (the Squat was near where Academy One now stands) whilst praising the Russell (where the Factory nights were hosted) for â€œpresenting the best bands in the country every weekâ€.
If you'd like to leave a comment, please Login. Login
Manchester Digital Music Archive is licensed under an
Attribution-NonCommercial-ShareAlike 4.0 International License.
Charity no. 1164179
Our archive currently contains 3816 Bands, 743 DJs, 1437 Venues, 298 Industry Professionals and 28661 artefacts contributed by 3925 members.