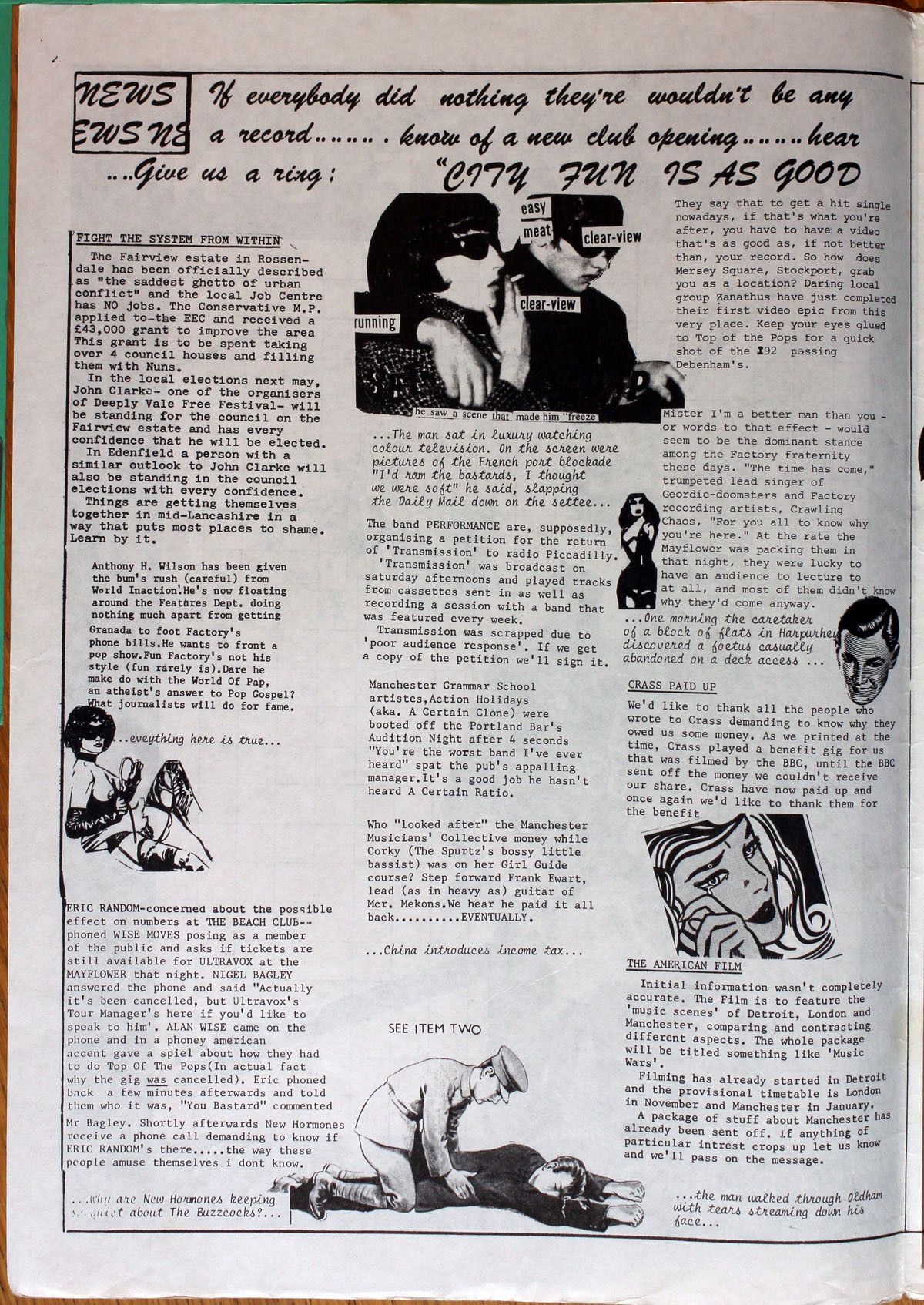 NEWS
If everybody did nothing they’re wouldn’t be any news. These news pages depend on you! If you're releasing a record … .. know of a new club opening .. .. .. hear about any interesting event .. come across gossip.. .. give us a ring : "CITY FUN IS AS GOOD AS YOU MAKE IT"

FIGHT THE SYSTEM FROM WITHIN
The Fairview estate in Rossen-dale has been officially described as "the saddest ghetto of urban ‘conflict’ and the local Job Centre has NO Jobs. The Conservative M.P. applied to-the EEC and received a £43,000 grant to improve the area This grant is to be spent taking over 4 council houses and filling them with Nuns.
In the local elections next may, John Clarke- one of the organisers ‘of Deeply Vale Free Festival- will be standing for the council on the Fairview estate and has every confidence that he will be elected.
In Edenfield a person with a similar outlook to John Clarke will also be standing in the council elections with every confidence.

Things are getting themselves together in mid-Lancashire in a way that puts most places to shame. Learn by it.
Anthony H. Wilson has been given the bum's rush (careful) from World Inaction! He's now floating around the Features Dept. doing nothing much apart from getting Granada to foot Factory's phone bills.He wants to front a pop show.Fun Factory's not his style (fun rarely is).Dare he make do with the World Of Pap, an atheist's answer to Pop Gospel? What journalists will do for fame.
..everything here is true..

ERIC RANDOM-concerned about the possible effect on numbers at THE BEACH CLUB-- phoned WISE MOVES posing as a member of the public and asks if tickets are still available for ULTRAVOX at the MAYFLOWER that night. NIGEL BAGLEY answered the phone and said "Actually it's been cancelled, but Ultravox's Tour Manager's here if you'd like to speak to him‘. ALAN WISE came on the phone and in a phoney american accent gave a spiel about how they had to do Top Of The Pops(In actual fact why the gig was cancelled). Eric phoned back a few minutes afterwards and told them who it was, “You Bastard" commented Mr Bagley. Shortly afterwards New Hormones receive a phone call demanding to know if ERIC RANDOM's there.....the way these people amuse themselves i dont know.

...Why are New Hormones keeping so quiet about The Buzzcocks?...

...The man sat in luxury watching colour television. On the screen were pictures of the French port blockade "I'd ram the bastards, I thought we were soft" he said, slapping the Daily Mail down on the settee...

The band PERFORMANCE are, supposedly, organising a petition for the return of 'Transmission' to radio Piccadilly.
'Transmission' was broadcast on saturday afternoons and played tracks from cassettes sent in as well as recording a session with a band that was featured every week.
Transmission was scrapped due to ‘poor audience response‘. If we get a copy of the petition we'll sign it.

Manchester Grammar School artistes,Action Holidays (aka. A Certain Clone) were booted off the Portland Bar's Audition Night after 4 seconds "You're the worst band I've ever heard" spat the pub's appalling manager.It's a good job he hasn't heard A Certain Ratio.

Who "looked after" the Manchester Musicians‘ Collective money while Corky (The Spurtz's bossy little bassist) was on her Girl Guide course? Step forward Frank Ewart, lead (as in heavy as) guitar of Mcr. Mekons.He hear he paid it all back. . . . . . . . . .EVENTUALLY.

They say that to get a hit single nowadays, if that's what you're after, you have to have a video that's as good as, if not better than, your record. So how does Mersey Square,Stockport, grab you as a location? Daring local group Zanathus have just completed their first video epic from this very place. Keep your eyes glued to Top of the Pops for a quick shot of the I92 passing Debenham's.

Mister I'm a better man than you - or words to that effect — would seem to be the dominant stance among the Factory fraternity these days. "The time has come", trumpeted lead singer of Geordie-doomsters and Factory recording artists, Crawling Chaos, "For you all to know why you're here." At the rate the Mayflower was packing them in that night, they were lucky to have an audience to lecture to at all, and most of them didn't know why they'd come anyway.

One morning the caretaker of a block of flats in Harpurhey discovered a foetus casually abandoned on a deck access...

CRASS PAID UP
We'd like to thank all the people who wrote to Crass demanding to know why they owed us some money. As we printed at the time, Crass played a benefit gig for us that was filmed by the BBC, until the BBC sent off the money we couldn't receive our share. Crass have now paid up and once again we'd like to thank them for the benefit

THE AMERICAN FILM
Initial information wasn't completely accurate. The Film is to feature the ‘music scenes‘ of Detroit, London and Manchester, comparing and contrasting different aspects. The whole package will be titled something like ‘Music Wars‘.
Filming has already started in Detroit and the provisional timetable is London in November and Manchester in January.
A Package of stuff about Manchester has a1ready been sent off. If anything of particular intrest crops up let us know and we'll pass on the message.

...the man walked through Oldham tears streaming down his face...