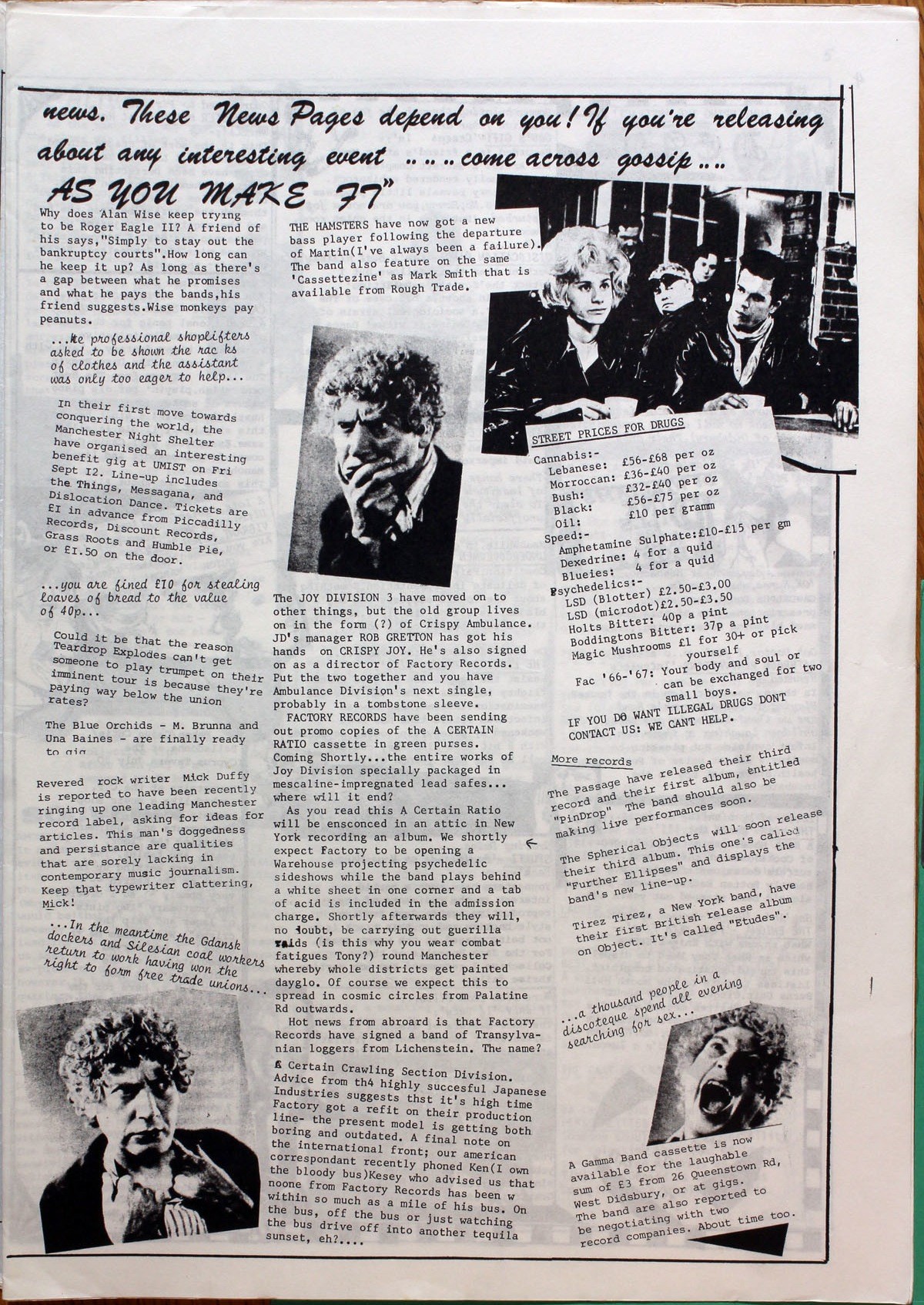 TRANSCRIPTION
Why does Alan Wise keep trying to be Roger Eagle II? A friend of his says,"Simply to stay out the bankruptcy courts".How long can he keep it up? As long as there's a gap between what he promises and what he pays the bands,his friend suggests.Wise monkeys pay peanuts.

...? professional shoplifters asked to be shown the rac ks of clothes and the assistant was only too eager to help...

In their first move towards conquering the world, the Manchester Night Shelter have organised an interesting benefit gig at UMIST on Fri Sept 12. Line-up includes the Things, Messagana, Dislocation Dance. Tickets are £1 in advance from Piccadilly Records, Discount Records, Grass Roots and Humble Pie, or £1.50 on the door.
...you are fined £10 for stealing loaves of bread to the value of 40p...

Could it be the reason Teardrop Explodes can't get someone to play trumpet on their imminent tour is because they're playing way below the union rates?

The Blue Orchids - M. Brunna and Una Baines - are finally ready to gig.

Revered rock writer Mick Duffy is reported to have been recently ringing up one leading Manchester record label, asking for ideas for articles. This man's doggedness and persistance are qualities that are sorely lacking in contemporary music journalism. Keep that typewriter clacking, Mick!

...in the meantime the Gdansk dockers and Silesian coal workers return to work having won the right to form free trade unions...

THE HAMSTERS have got a new bass player following the departure of Martin (I've always been a failure). The band also feature on the same 'Cassettezine' as Mark Smith that is available from Rough Trade.

The JOY DIVISION 3 have moved on to other things, but the old group lives on in the form (?) of Crispy Ambulance. JD's manager ROB GRETTON has got his hands on CRISPY JOY. He's also signed on as a director of Factory Records. Put the two together and you have Ambulance Division's next single, probably in a tombstone sleeve.

FACTORY RECORDS have been sending out promo copies of the A CERTAIN RATIO cassette in green purses.

As you read this A Certain Ratio will be ensconced in an attic in New York recording an album. We shortly expect Factory to be opening a Warehouse projecting psychedelic sideshows while the band plays behind ' a white sheet in one corner and a tab of acid is included in the admission charge. Shortly afterwards they will, no doubt, be carrying out guerilla raids (is this why you wear combat fatigues Tony?) round Manchester whereby whole districts get painted dayglo. Of course we expect this to spread in cosmic circles from Palatine Rd outwards.

Hot news from abroard is that Factory Records have Signed a band of Transylva-nian loggers from Lichenstein. The name? A Certain Crawling Section Division.

Advice from th4 highly successful Japanese Industries suggests thst it's high time Factory got a refit on their production line- the present model is getting boring and outdated. A final note on the international front; our american correspondant recently phone Ken (I own the bloody bus )Kesey who advised us that noone from Factory Records has been w within so much as a mile of his bus. On the bus, off the bus or just watching the bus drive off into another tequila sunset, eh?...

The Passage have released their third record and their first album, entitled "PinDrop" The band should also be making live performances soon.

The Spherical Objects will soon release their third album. This one's called "Further Ellipses" and displays the band's new line-up.

Tirez Tirez, a New York band, have their first British release album on Object. It's called "Etudes".
...a thousand people in a discoteque spend all evening searching for sex...

A Gamma Band cassette is now available for the laughable sum of £3 from 26 Queenstown Rd, West Didsbury, or at gigs. The band are also reported to be negotiating with two record companies. About time too.