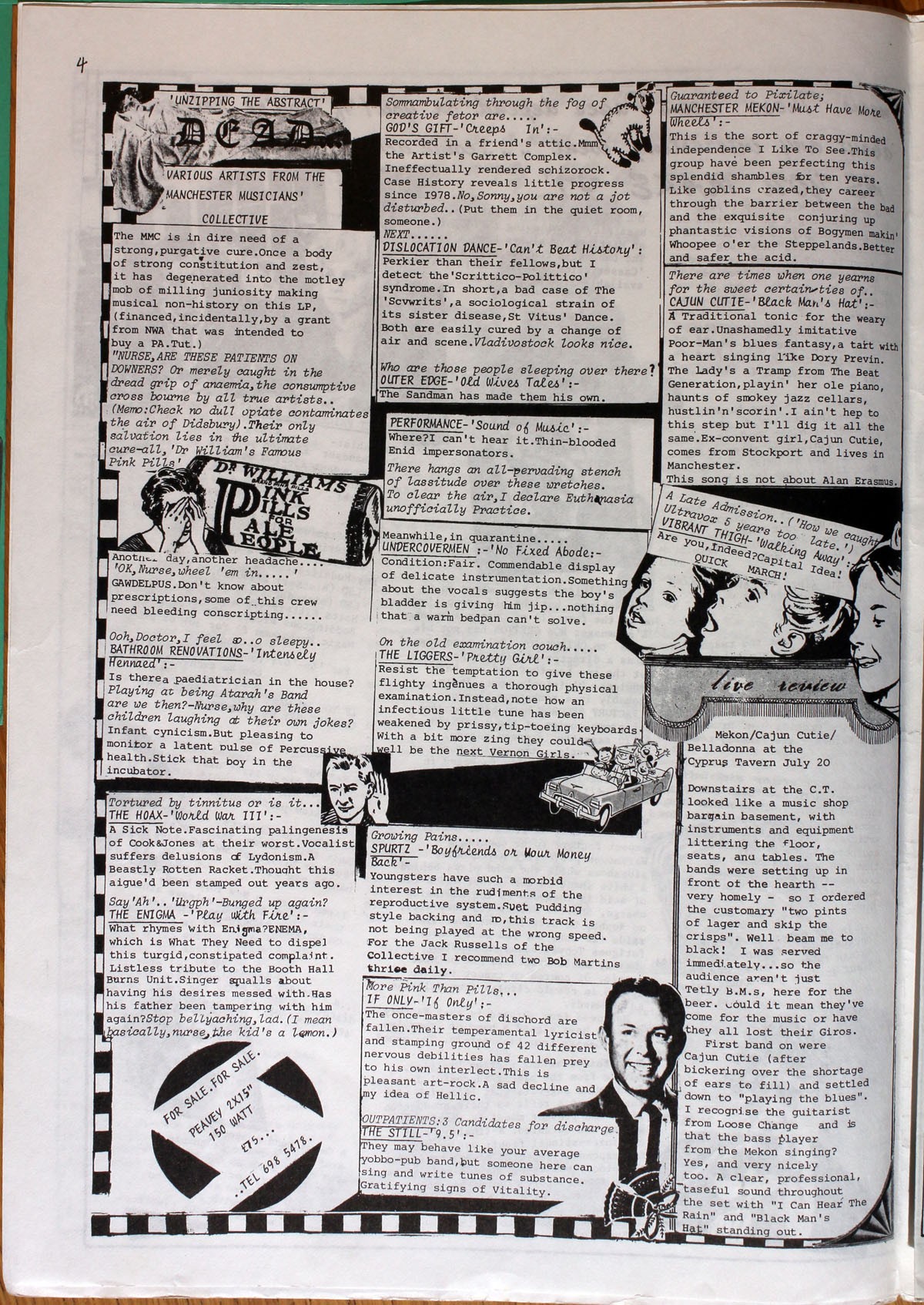 'UNZIPPING THE ABSTRACT' VARIOUS ARTISTS FROM THE MANCHESTER MUSICICANS COLLECTIVE

The MMC is in dire need of a strong, purgative cure.Once a body of strong constitution and zest, it has degenerated into the motley mob of milling juniosity making musical. non-history on this LP, {financed,incidenta11y,by a grant from NWA that was intended to buy a PA. Tut.)

"NURSE,ARE‘ THESE PATIENTS ON DOWNERS? Or merely caught in the _dread grip of anaemia, the consumptive cross bourne by all true artists.. (Memo:Check no dull opiate contaminates the air of Didsbury).Their only salvation lies in the ultimate cure-all, ’Dr William's Famous Pink Pills'
Another day,another headache...

BATHROOM RENOVATIONS — 'Intensely Hennaed':-
Is therea paediatrician in the house? Playing at being Atarah's Band are we then?—Nurse,why are these children laughing at their own jokes?
Infant cynicism.But pleasing to monitor a latent nulse of Percussive health.Stick that boy in the incubator.
Tortured by tinnitus or is it...

THE ENIGMA —'Play with Fire':-
What rhymes with Enigma? ENEMA, which is What They Need to dispel this turgid, constipated complaint. Listless tribute to the Booth Hall Burns Unit.Singer squalls about having his desires messed with.Has his father been tampering with him again? Stop bellyaching, lad. (I mean basically, nurse, the kid's a lemon.)

Somnambulating through the fog of creative fetor are. . . .
GOD'S GIFT-'Creeps In':-
Recorded in a friend's attic.Mmm the artist's Garrett Complex. Ineffectually rendered schizorock. Case History reveals little progress since I978.No,Sonny,you are not a jot disturbed.. (Put them in the quiet room, someone.)

NEXT.....
DISLOCATION DANCE- 'Can't Beat History': Perkier than their fellows,but I detect the'Scrittico-Polittico' syndrome.In short,a had case of The 'Scvwrits',s sociological strain of its sister disease,St Vitus‘ Dance. Both are easily cured by a change of air and scene. Vladivostock looks nice.

Who are those people sleeping over there?
OUTER EDGE - 'Oid Wives Tales':-
The Sandman has made them his own
PERFORMANCE - 'Sound Of Music'':-
Where? I can't hear it.Thin—blooded Enid impersonators.
There hangs an all—pervading stench of lassitude over these wretches. To clear the air,I declare Euthanasia unofficially practice.

Meanwhile in quarantine....
UNDERCOVERMEN:- 'No Fixed Abode:-
Condition:Fair. Commendable display of delicate instrumentation.Something about the vocals suggests the boy's bladder is giving him jip...nothing that a warm bedpan can't solve.
On the old examination couch....
THE LIGGERS- 'Pretty Girl':-
Resist the temptation to give these flighty ingénues a thorough physical examination.Instead,note how an infectious little tune has been weakened by prissy,tip—toeing keyboards. With a bit more zing they well be the next Vernon Girls.

Growing Pains.....
SPURTZ -'Boyfriends or your money back'-
Youngsters have such a morbid interest in the rudiments of the reproductive system.Suet Pudding style backing and no,this track is not being played at the wrong speed. For the Jack Russells of the Collective I recomend two Bob Martins thrice daily.
More Pink than Pills...
IF ONLY-’If Only‘:-
The once—masters of dischord are fallen.Their temperamental lyricist and stamping ground of 42 different nervous debilities has fallen prey to his own interlect.This is pleasant art-rock.A sad decline and my idea of Hellic.

OUTPATIENTS: 3 Candidates for discharge.
THE STILL- '9-5‘:-
They may behave like your average yobbo—pub hand but someone here can sing and write tunes of substance. Gratifyinq signs of Vitality

Guaranteed to Pixilate;
MANCHESTER MEKON- 'Must Have More Wheels':-
This is the sort of craggy-minded independence I Like To See.This group have been perfecting this splendid shambles for ten years. Like goblins crazed they career through the barrier between the bad and the exquisite conjuring up phantastic visions of Bogymen makin' whoopee o'er the Steppelands. Better and safer the acid.

There are times when one yearns for the sweet certain-ties of..
CAJUN CUTIE— 'Black Man's Hat' A Traditional tonic: for the weary of ear. Unashamedly imitative Poor-Man's blues fantasy, a tart with a heart singing like Dory Previn. The lady's a Tramp from The Beat Generation,playin' her ole piano, haunts of smokey jazz cellars, hustlin'n'scorin'. I ain't hep to this step but I'll dig it all the same'. Ex—convent girl,Cajun Cutie, comes from Stockport and lives in Manchester.

This song is not about Alan Erasmus.
A Late Admission.. ('How we caught Ultravox 5 years too late.')
VIBRANT THIGH- 'Walking Away':- Are you, indeed? Capital Idea!
QUICK! MARCH!

Live Review
Mekon/Cajun Cutie/ Belladonna at the Cyprus Tavern July 20
Downstairs at the C.T. looked like a music shop bargain basement, with instruments and equipment littering the floor, seats, and tables. The bands were setting up in front of the hearth -- very homely -— so I ordered the customary "two pints of lager and skip the crisps". Well beam me to black! I was served immediately..so the audience aren't just Tetly B.M.s, here for the beer. Could it mean they've come for the music or have they all lost their Giros.
First band on were Cajun Cutie (after bickering over the shortage of ears to fill) and settled down to "playing the blues". l recognise the guitarist from Loose Change and is that the bass player from the Mekon singing? Yes, and very nicely too. A clear, professional, tasteful sound throughout the set with "I Can Hear The Rain" and "Black Man's Hat" standinq out.