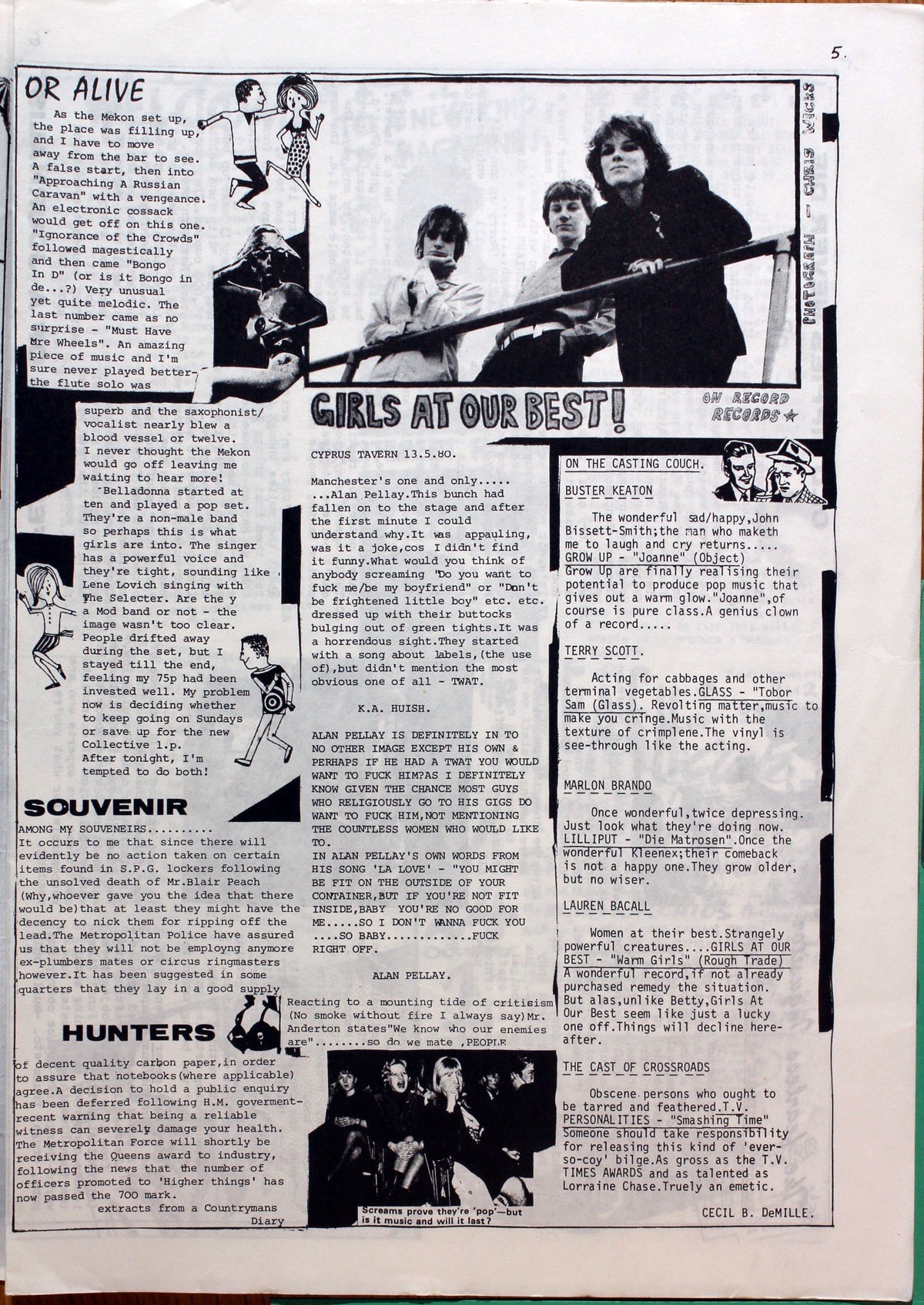 As the Mekon set up, the place was filling up, and I have to move away from the bar to see. A false start, then into "Approaching A Russian Caravan" with a vengeance. An electronic cossack would get off on this one. "Ignorance of the Crowds" followed magestically and then came “Bongo In D" (or is it Bongo in de.. -?) Very unusual yet quite melodic. The last number came as no surprise - "Must Have More Wheels". An amazing piece of music and I'm sure never played better- the flute solo was superb and the saxophonist/vocalist nearly blew a blood vessel or twelve. I never thought the Mekon would go off leaving me waiting to hear more!
Belladonna started at ten and played a pop set. They're a non-male band so perhaps this is what girls are into. The singer has a powerful voice and they're tight, sounding like Lene Lovich singing with The Selecter. Are they a Mod band or not — the image wasn't too clear.

People drifted away during the set, but I stayed till the end, feeling my 75p had been invested well. My problem now is deciding whether to keep going on Sundays or save up for the new Collective l.p.
After tonight, I'm tempted to do both!

SOUVENIR
AMONG MY SOUVENEIRS--........
It occurs to me that since there will evidently be no action taken on certain items found in S.P.G. lockers following the unsolved death of Mr.Blair Peach (Why,whoever gave you the idea. that there would be) that at least they might have the decency to nick them for ripping off the lead.The Metropolitan Police have assured us that they will not be employing anymore ex-plumbers mates or circus ringmasters however.It has been suggested in some quarters that they lay in a good supply of decent quality carbon paper,in order to assure that notebooks (where applicable) agree.A decision to hold a public enquiry has been deferred following H.M. goverment-recent warning that being a reliable witness can severely damage your health. The Metropolitan Force will shortly be receiving the Queens award to industry, following the news that the number of officers promoted to ‘Higher things‘ has now passed the 700 mark.
extracts from a Countrymans Diary

CYPRUS TAVERN 13.5.80.
Manchester's one and only. . . . . ...Alan Pellay.This bunch had fallen on to the stage and after the first minute I could understand why.It was appaulinq, was it a joke, cos I didn't find it funny.What would you think of anybody screaming ‘Do you want to fuck me/be my boyfriend" or "Don't be frightened little boy“ etc. etc. dressed up with their buttocks bulging out of green tights.It was a horrendous sight.They started with a song about labels, (the use of) ,but didn't mention the most obvious one of all - TWAT.

ALAN PELLAY IS DEFINITELY IN TO NO OTHER IMAGE EXCEPT HIS OWN & PERHAPS IF HE HAD A YOU WOULD WANT TO FUCK HIM?AS I DEFINITELY KNOW GIVEN THE CHANCE MOST GUYS WHO RELIGIOUSLY GO TO HIS GIGS DO WANT TO FUCK HIM, NOT MENTIONING THE COUNTLESS WOMEN WHO WOULD LIKE TO.
iN ALAN PELLAY'S OWN WORDS FROM HIS SONG ‘LA LOVE‘ - "YOU MIGHT BE FIT ON THE OUTSIDE OF YOUR CONTAINER, BUT IF YOU'RE NOT FIT INSIDE,BABY YOU'RE NO GOOD FOR ME.....SO I DON'T WANNA FUCK YOU....SO BABY.......--.FUCK RIGHT OFF.

Reacting to a mounting tide of criticism (No smoke without fire I always say)Mr. Anderton states"We know who our enemies are"................so do we mate, PEOPLE

ON THE CASTING COUCH.

BUSTER KEATON
The wonderful sad/happy,John Bissett-Smith;the man who maketh me to laugh and cry returns.....
GROW UP - "Joanne" (Object)
Grow Up are finally realising their potential to produce pop music that gives out a warm glow.“Joanne",of course is pure class.A genius clown of a record.....

TERRY SCOTT
Acting for cabbages and other terminal vegetales.GLASS - “Tobor Sam (Glass}. Revolting matter,music to make you cringe.Music with the texture of crimplene.The vinyl is see—through like the acting.

MARLON BRANDO
Once wonderful,twice depressing. Just look what they're doing now.
LILLIPUT - “Die Matrosen“.Once the wonderful Kleenex;their comeback is not a happy one.They grow older, but no wiser.

LAUREN BACALL
Women at their best.Strangely powerfui creatures....GIRLS AT OUR BEST — "Warm Girls" (Rough Trade) A wonderful record, if not already purchased remedy the situation. But alas,unlike Betty,Girls At Our Best seem like just a lucky one off.Things will decline here-after.

THE CAST OF CROSSROADS
Obscene persons who ought to be tarred and feathered.T.V. PERSONALITIES - "Smashin Time" Someone should take responsibility for releasing this kind of ‘ever-so—coy' biIge. As gross as the T.V.TIMES AWARDS and as talented as Lorraine Chase.Truely an emetic.
CECIL B. DeMILLE.