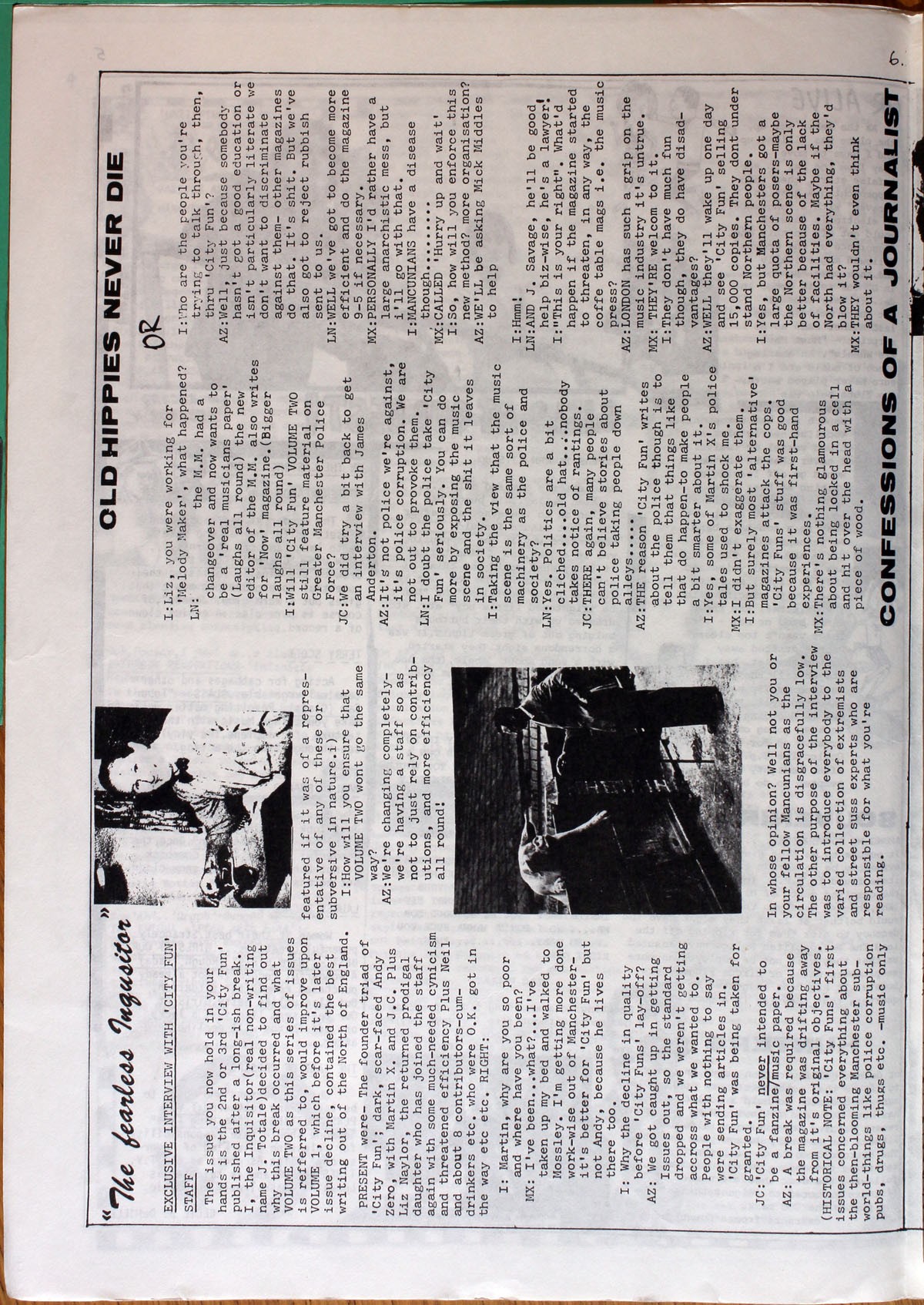 The issue you now hold in your hands is the 2nd or 3rd ‘City Fun‘ published after a long-ish break.
I, the Inquisitor(real non-writing name J. Totale) decided to find out why this break occurred and what VOLUME TWO as this series of issues is refferred to, would improve upon VOLUME 1, which before it's later issue decline, contained the best writing out of the North of England.

PRESENT were- The founder triad of ‘City Fun‘; dark, scar-faced Andy Zero, with Martin X. and J,C. Plus Liz Naylor, the returned prodigal daughter who has joined the staff again with some much-needed cynicism and threatened efficiency Plus Neil and about 8 contributors—cum-drinkers etc. who were O,K. got in the way etc etc. RIGHT:

I: Martin, why are you so poor and where have you been?
MX: I've been...what?...I've taken up my bed and walked to Mossley. I'm getting more done work-wise out of Manchester-it‘s better for ‘City Fun‘ but not Andy, because he lives there too.

I: Why the decline in quality before ‘City Funs‘ lay-off?
AZ: we got caught up in getting Issues out, so the standard dropped and we weren't getting accross what we wanted to. People with nothing to say were sending articles in. ‘City Fun‘ was being taken for granted.
JC:'City Fun‘ never intended to be a fanzine/music paper.
AZ: A break was required because the magazine was drifting away from it's original objectives.
(HISTORICAL NOTE: ‘City Funs' first issues concerned everything about the then-blooming Manchester sub-world-things like police corruption pubs, drugs, thugs etc. —music only featured if it was of a representative of any of these or subversive in nature.)

I:How will you ensure that VOLUME TWO wont go the same way?
AZ:We're changing completely-we're having a staff so as not to just rely on contrib-utions, and more efficiency all round!
In whose opinion? Well not you or your fellow Mancunians as the circulation is disgracefully low. The other purpose of the interview was to introduce everybody to the varied collection of extremists and street suss experts who are responsible for what you're reading.

OLD HIPPIES NEVER DIE or CONFESSIONS OF A JOURNALIST
I: Liz, you were working for Melody Maker‘, what happened?
LN: the M.M. had a changeover and now wants to be a ‘real musicians paper‘ (Laughs all round) the new editor of the M.M. also writes for 'Now' magazine.(Bigger laughs all round)

I: Will ‘City Fun‘ VOLUME TWO still feature material onGreater Manchester PoliceForce?
JC: We did try a bit back to get an interview with James Anderton.
AZ: It's not police we're against, it's police corruption. We are not out to provoke them.
LN: I doubt the police take ‘City Fun‘ seriously. You can do more by exposing the music scene and the shit it leaves in society.

I:Taking the view that the music scene is the same sort of machinery as the police and society?
LN: Yes. Politics are a bit cliched....old hat...nobody takes notice of rantings.
JC: THERE again, many people can't believe stories about police taking people down alleys.....
AZ:THE reason 'City Fun‘ writes about the police though is to tell them that things like that do happen-to make people a bit smarter about it.
I:Yes, some of Martin X's police tales used to shock me.
MX:I didn't exaggerate them.
I:But surely most 'alternative' magazines attack the cops. ‘City Funs' stuff was good because it was first-hand experiences.
MX:There's nothing glamourous about being locked in a cell and hit over the head with a piece of wood.

I: Who are the people you're trying to talk through, then, thru ‘City Fun‘?
AZ:Well, just because somebody hasn't got a good education or isn't particularly literate we don't want to discriminate against them— other magazines do that. It's shit. But we've also got to reject rubbish sent to us.
LN:WELL we've got to become more efficient and do the magazine 9-5 if necessary.
MX:PERSONALLY I'd rather have a large anarchistic mess, but i'll go with that.

I:So, how will you enforce this new method? more organisation?
AZ:WE'LL be asking Mick Middles to help
I:Hmm!
LN:AND J. Savage, he'll be good help biz—wise, he's a lawyer!
I:"This is your right". what'd happen if the magazine started to threaten, in any way, the coffe table mags i.e, the music press?
AZ:LONDON has such a grip on the music industry it's untrue.
MX: THEY'RE welcom to it.
I:They don't have much fun though, they do have disad-vantages?
AZ:WELL they'll wake up one day and see ‘City Fun‘ selling 15,000 copies. They dont under stand Northern people.
I:Yes, but Manchesters got a large quota of posers-maybe the Northern scene is only better because of the lack of facilities. Maybe if the North had everything, they'd blow it?
MX:THEY wouldn't even think about it.

David Wilkinson Says –
Interview with the editors, revealing the balance shifting further towards Liz and Cath. Efficiency is now to be privileged over a jumble of contributions, and politically Liz wonders how far it's worth taking on roles like exposing police brutality, thinking that City Fun should concentrate more on the politics of the music scene. Nevertheless they stress that they've always wanted to cover the whole of Manchester's 'sub-world', with music only featuring "if it was subversive in nature". Also, once under the helm of Liz and Cath, City Fun would start to feature more of their blackly funny take on feminism and gay rights placed unselfconsciously side by side with music coverage, meaning that it never really narrowed its original remit.
If you'd like to leave a comment, please Login. Login
Manchester Digital Music Archive is licensed under an
Attribution-NonCommercial-ShareAlike 4.0 International License.
Charity no. 1164179
Our archive currently contains 3734 Bands, 739 DJs, 1424 Venues, 261 Industry Professionals and 27924 artefacts contributed by 3859 members.