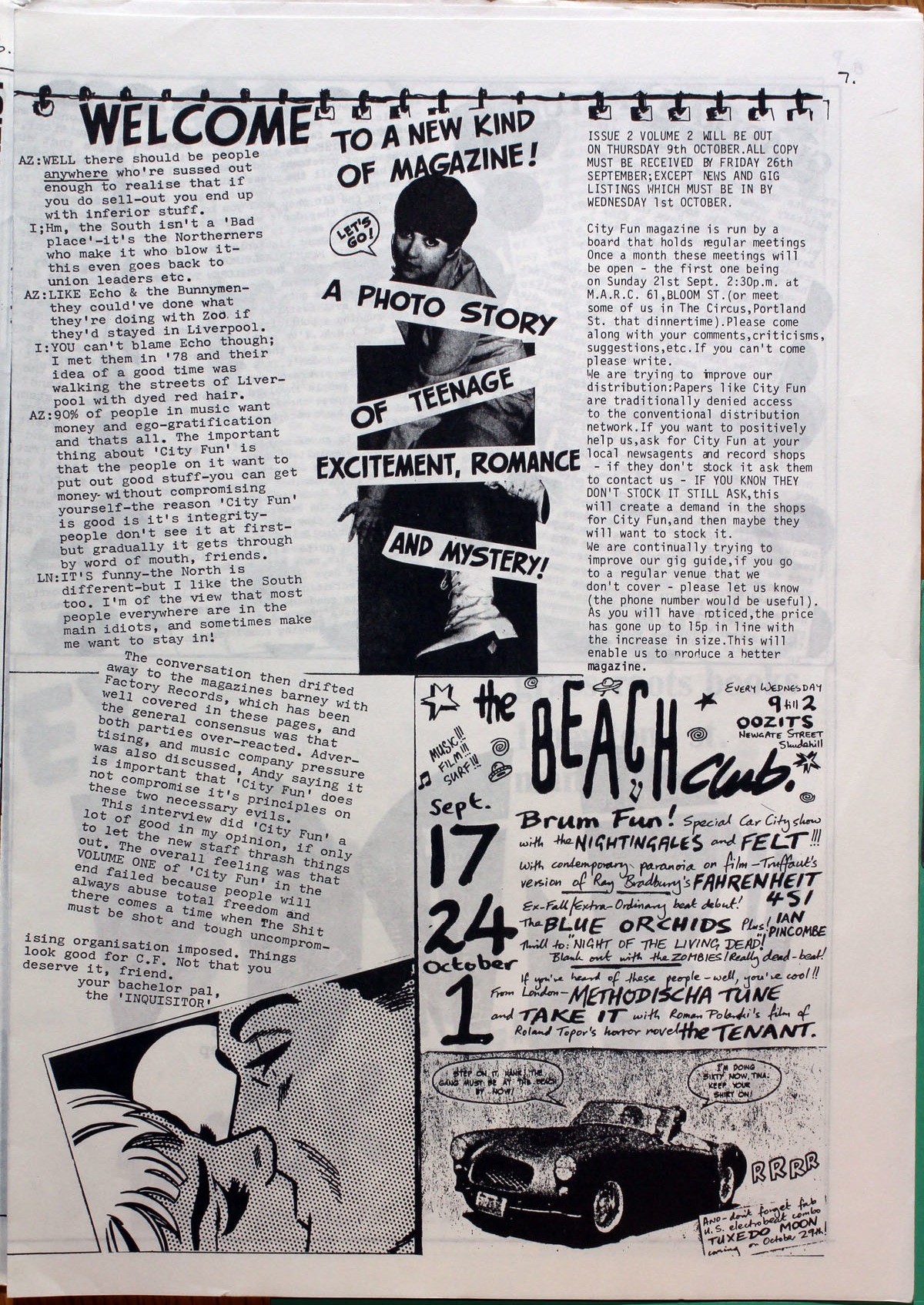 AZ:WELL there should be people anywhere who're sussed out enough to realise that if You do sell-out you end up with inferior stuff.

I:Hm, the South isn't a ‘Bad place'—it's the Northerners who make it who blow it-this even goes back to union leaders etc.
AZ:LIKE Echo & the Bunnymen-they could've done what they're doing with Zoo if they'd stayed in Liverpool.
I:YOU can't blame Echo though; I met them in '78 and their idea of a good time was walking the streets of Liver-pool with dyed red hair.
AZ:90% of people in music want money and ego—gratification and thats all. The important thing about ‘City Fun‘ is that the people on it want to put out good stuff-you can get money-without compromising yourself-the reason ‘City Fun’ is good is it's integrity-people don't see it at first-but gradually it gets through by word of mouth, friends.
LN:IT'S funny-the North is different-but I like the South too, I'm of the view that most people everywhere are in the main idiots, and sometimes make me want to stay in!

The conversation then drifted away to the magazines barney with Factory Records, which has been well covered in these pages, and the general consensus was that both parties over-reacted. Adver-tising, and music company pressure was also discussed, Andy saying it is important that ‘City Fun’ does not compromise it's principles on these two necessary evils.

This interview did ‘City Fun’ a lot of good in my opinion, if only to let the new staff thrash things out, The overall feeling was that VOLUME ONE of 'City Fun‘ in the end failed because people will always abuse total freedom and there comes a time when The Shit must be shot and tough uncompromising organisation imposed. Things look good for C.F. Not that you deserve it, friend.

your bachelor pal,
the 'INQUISITOR'

ISSUE 2 VOLUME 2 WILL BE OUT ON THURSDAY 9th OCTOBER.ALL COPY MUST BE RECEIVED BY FRIDAY 26th SEPTEMBER;EXCEPT NEWS AND GIG LISTINGS WHICH MUST BE IN BY WEDNESDAY 1st OCTOBER.

City Fun magazine is run by a board that holds regular meetings. Once a month these meetings will be open - the first one being on Sunday 21st Sept. 2:30p.m. at M.A.R.C. 61,BLOOM ST.(or meet some of us in The Circus,Portland St. that dinnertime).Please come along with your comments,criticisms, suggestions,etc.If you can't come please write.
We are trying to improve our distribution:Papers like City Fun are traditionally denied access to the conventional distribution network.If you want to positively help us,ask for City Fun at your local newsagents and record shops - if they don't stock it ask them to contact us - IF YOU KNOW THEY DON'T STOCK IT STILL ASK,this will create a demand in the shops for City Fun,and then maybe they will want to stock it.

We are continually trying to improve our gig guide.if you go to a regular venue that we don't cover - please let us know (the phone number would be useful). As you will have noticed,the price has gone up to 15p in line with the increase in size.This will enable us to produce a better magazine.