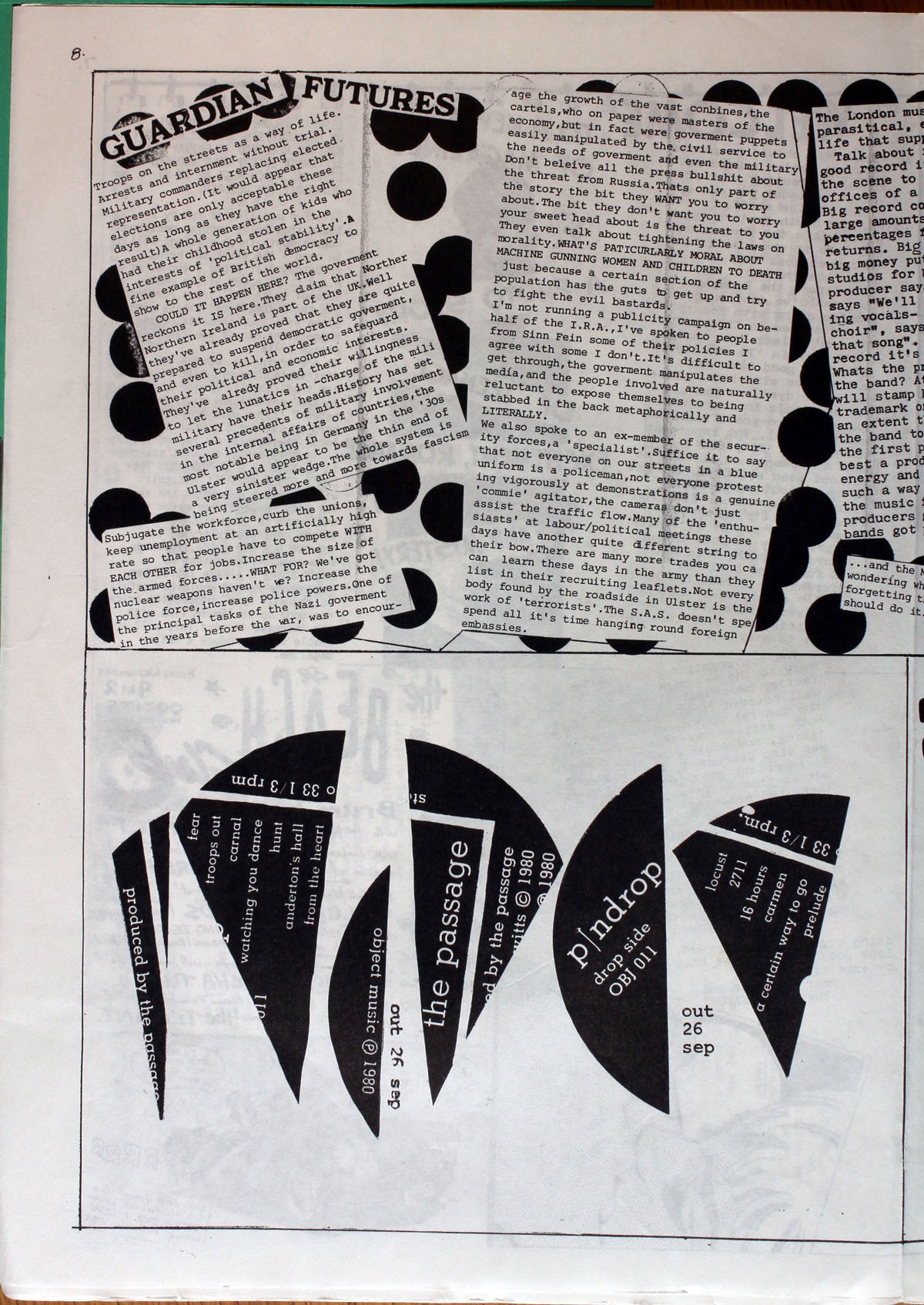 Troops on the streets as a way of life. Arrests and internment without trial. Military commanders replacing elected representation. (It would appear that elections are only acceptable these days as long as they have the right result)A whole generation of kids who had their childhood stolen in the interests of 'political stability'. A fine example of British democracy to show to the rest of the world.

COULD IT HAPPEN HERE? The government reckons it IS here.They claim that Norther Northern Ireland is part of the UK.Well they've already proved that they are quite prepared to suspend democratic government, and even to kill,in order to safeguard their political and economic interests. They've already proved their willingness to let the lunatics in- charge of the military have their heads. History has set several precedents of military involvement in the internal affairs of countries,the most notable being Germany in the '30s. Ulster would appear to be the thin end of a very sinister wedge.The whole system is being steered more and more towards fascism.
Subjugate the workforce, curb the unions, keep unemployment at an artificially high rate so that people have to compete WITH EACH OTHER for jobs.Increase the size of the armed forces....WHAT FOR? We've got nuclear weapons have't we? Increase the police force,increase police powers. One of the principal tasks of the Nazi government in the years before the war, was to encour-age the growth of the vast conbines, the cartels, who on paper were masters of the economy, but in fact were goverment puppets easily manipulated by the civil service to the needs of goverment and even the military. Don't beleive all the press bullshit about the threat from Russia. Thats only part of the story the bit they WANT you to worry about. The bit they don't want you to worry your sweet head about is the threat to you. They even talk about tightening the laws on morality. WHAT'S PARTICULARLY MORAL ABOUT MACHINE GUNNING WOMEN AND CHILDREN TO DEATH just because a certain section of the population has the guts to get up and to fight the evil bastards.
I'm not running a publicity campaign on behalf of the I.R.A., I've spoken to people from Sinn Fein some of their policies I agree with some I don't. It's difficult to get through , the government manipulates the media,and the people involved are naturally reluctant to expose themselves to being stabbed in the back metaphorically and LITERALLY.

We also spoke to an ex-member of the security forces, a 'specialist'. Suffice it to say that not everyone on our streets in a blue uniform is a policeman,not everyone protesting vigorously at demonstrations is a genuine 'commie' agitator, the cameras don't just assist the traffic flow. Many of the 'enthu-siasts' at labour/political meetings these days have another quite different string to their bow. There are many more trades you ca can learn these days in the army than they list in their recruiting leaflets. Not every body found by the roadside in Ulster is the work of 'terrorists'. The S.A.S. doesn't spe spend all it's time hanging round foreign embassies.
The London music industry is parasitical, eating away at the life that supports it...
Talk about records. YOU know a good record if you hear it. Cut the scene to the ultra modern offices of a London record company. Big record companies dealing in large amounts of money for large percentages for (they hope) large returns. Big companies spending money putting bands into big studios for big production jobs... producer says "lengthen the solo", says "We'll double-track the back-ing vocals- make it sound like a choir", says "why don't you try that song". The producer gives a record it's 'feel' and it's 'sound' Whats the producer got to do with the band? At the worst a producer will stamp his (it usually is his) trademark on the record to such an extent that the thing causing the band to be in the studio in the first place is destroye. At best a producer transfers a bands energy onto tape in such a way that the vitality of the music is preserved. If the producers got an ego then bands got problems...
While nobody was looking Phil Spector became more 'important' than the people making the music. In the meantime Martin (Zero) Hannet adds, 'street Credibility' like turning on a tap. Unfortunately the crap doesn't stop here.