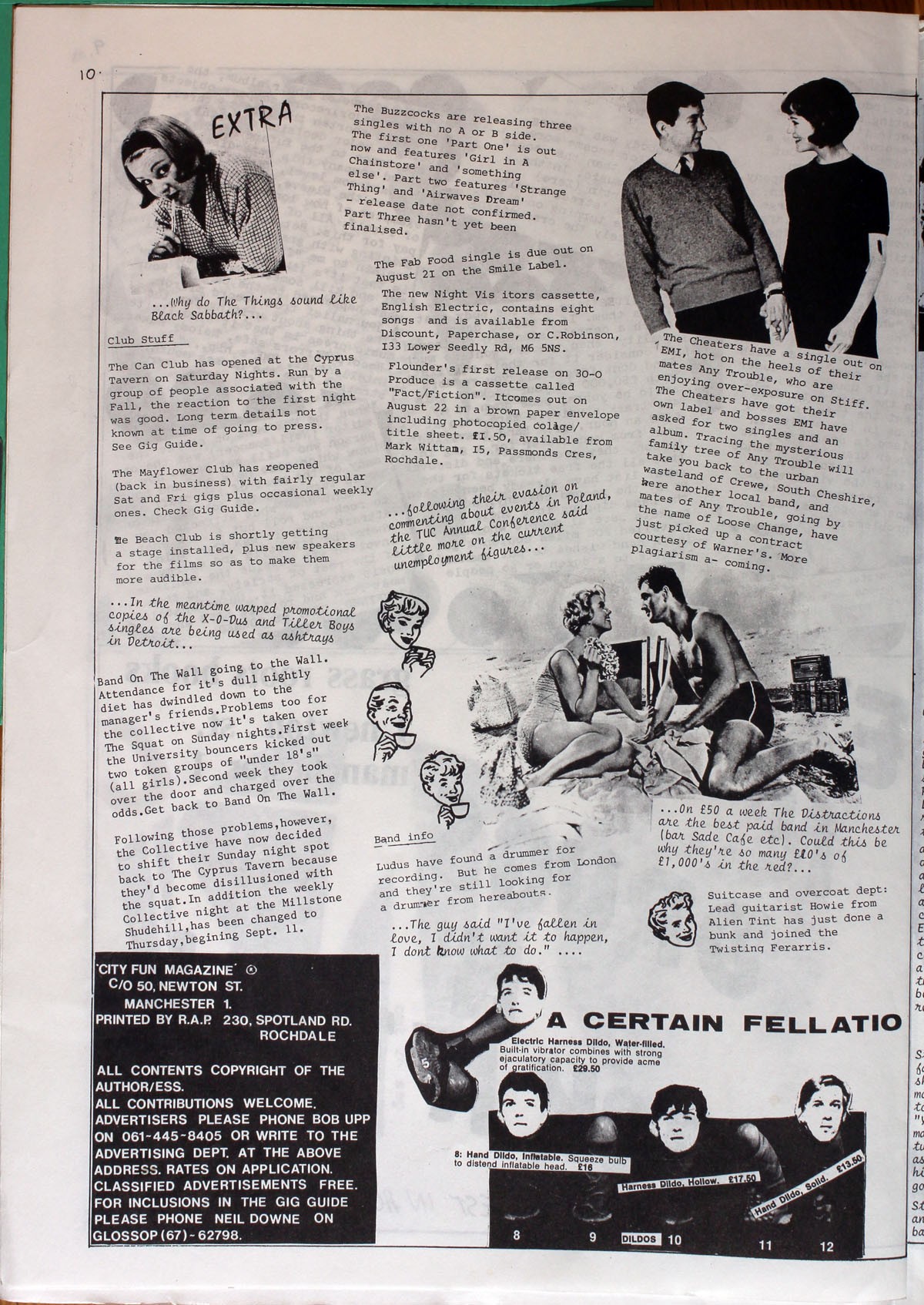 Club Stuff
The Can Can Club has opened at the Cyprus Tavern on Saturday nights. Run by a group of people associated with the Fall, the reaction to the first night was good. Long term details not known at time of going to press.
See Gig Guide.

The Mayflower Club has reopened (back in business) with fairly regular Sat and Fri gigs plus occasional weekly ones. Check Gig Guide.

The Beach Club is shortly getting a stage installed, plus new speakers for the films so as to make them more audible.

...In the meatime warped promotional copies of the X-O-Dus and Tiller Boys singles are being used as ashtrays in Detroit...

Band On The Wall going to the Wall. Attendance for it's dull nightly diet has dwindled down to the manager's friends.Problems too for the collective now it's taken over The Squat on Sunday nights.First week the University bouncers kicked ot two token groups of "under 18's" (all girls).Second week they took over the door and charged over the odds.Get back to Band On The Wall.

Following those problems, however, the Collective have now decided to shift their Sunday night spot back to The Cyprus Tavern because they'd become disillusioned with the squat. In addition the weekly Collective night at the Milltone Shudehill, has been changed to Thursday,begining Sept. 11

The Buzzcocks are releasing three singles with no A or B side. The first one 'Part One' is out now and features 'Girl in A Chainstore' and 'something else'. Part two features 'Strange Thing' and 'Airwaves Dream' - release date not confirmed. Part Three hasn't yet been finalised.

The Fab Food single is due out on August 21 on the Smile label.

Flounder's first release on 30-0 Produce is a cassette called "Fact/Fiction". It comes out on August 22 in a brown paper envelope including photocopied colage/title sheet. £1.50, available from Mark Wittam, 15, Passmonds Cres, Rochdale.

...following their evasion on commenting on events in Poland, the TUC Annual Conference said little more on the current unemployment figures...

Band info
Ludus have found a drummer for recording. But comes from London and they're still looking for a drummer from hereabouts.

The Cheaters have a single out on EMI, hot on the heels of their mates Any Trouble, who are enjoying over-exposure on Stiff. The Cheaters have got their own label and bosses EMI hae asked for two singles and an album. Tracing the mysterious family tree of Any Trouble will take you back to the urban wasteland of Crewe, South Cheshire, were another local band, and mates of Any Trouble, going by the name of Loose Change, have just picked up a contract courtesy of Warner's. More plagiarism a- coming.

Suitcase and overcoat dept: Lead guitarist Howie from Alien Tint has just done a bunk and joined the Twisting Ferarris.