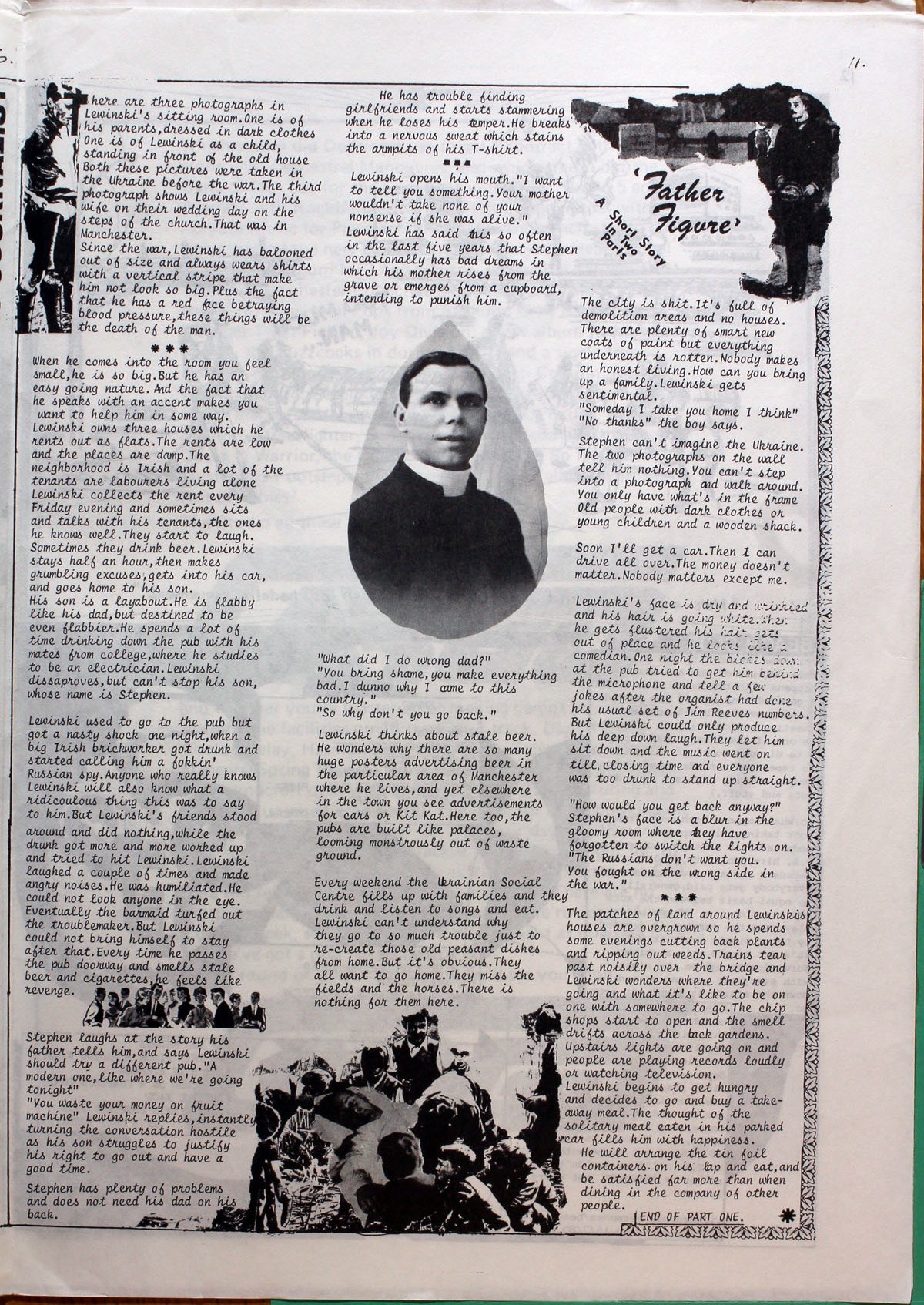 There are three photographs in Lewinski's sitting room. One is of his parents,dressed in dark clothes One is of Lewinksi as a child, standing in front of the old house Both these pictures were taken in the Ukraine before the war. The third photograph shows Lewinski and his wife on their wedding day on the steps of the church.That was in Manchester.
Since the war, Lewinski has ballooned out of size and always wears shirts with a vertical stripe that make him not look so bit.Plus the fact that he has a red face betraying blood pressure,these things will be the death of the man.
***
When he comes into the room you feel small, he is so big. But he has an easy going nature. And the fact that he speaks with an accent makes you want to help him in some way. Lewinski owns three houses which he rents out as flats. The rents are low and the places are damp. The neighbourhood is Irish and a lot of the tenants are labourers living alone Lewinski collects the rent every Friday evening and sometimes sits and talks with his tenants,the ones he knows well. They start to laugh. Sometimes they drink beer. Lewinski stay half an hour, then makes grumbling excuses,gets into his car, and goes home to his son.
His son is a layabout.He is flabby like his dad, but destined to be even flabbier. He spends a lot of time drinking down the pub with his mates from college,where he studies to be an electrician.Lewinski dissaproves,but he can't stop his son, whose name is Stephen.
Lewinski used to go to the pub but got a nasty shock one night,when a big Irish brickworker got drunk and started calling him a fokkin' Russian spy.Anyone who really knows Lewinski will also know what a ridicoulous thing this was to say to him.But Lewinkski's friends stood around and did nothing,while the drunk got more and more worked up and tried to hit Lewinski. Lewinski laughed a couple of times and made angry noises.He was humiliated.He could not look anyone in the eye. Eventually the barmaid turfed out the troublemaker. But Lewinski could not bring himself to stay after that. Every time he passes the pub doorway and smells stale beer and cigarettes, he feels like revenge.
Stephen laughs at the story his father tells him,and says Lewinski should try a different pub. "A modern one,like where we're going tonight"
"You waste your money on fruit machine" Lewinski replies,instantly turning the conversation hostile as his son struggles to justify his right to go out and have a good time.
Stephen has plenty of problems and does not need his dad on his back.
"What did I do wrong dad?"
"You bring shame, you make everything bad. I dunno why I came to this country."
"So why don't you go back."
Lewinski thinks about stale beer. He wonders why there are so many huge posters advertising beer in the particular area of Manchester were he lives, and yet elsewhere in the town you see advertisements for cars or Kit Kat.Here too, the pubs are built like big palaces, looming monstrously out of waste ground.
Every weekend the Ukranian Social Centre fills up with families and they drink and listen to songs and eat. Lewinski can't understand why they go to so much trouble just to re-create those old peasant dishes from home.But it's obvious.They all want to go home. They miss the fields and the horses.There is nothing for them here.
The city is shit. It's full of demolition areas and no houses. There are plenty of smart new coats of paint but everything underneath is rotten. Nobody makes an honest living . How can you bring up a family. Lewinski gets sentimental.
"Someday I take you home I think"
"No thanks" the boy says.
Stephen can't imagine the Ukraine. The two photographs on the wall tell him nothing. You can't step into a photograph and walk around. You only have what's in the frame. Old people with dark clothes or young children and a wooden shack.
Soon I'll get a car.Then I can drive all over. The money doesn't matter. Nobody matters except me.
Lewinski's face is dry and wrinkled and his hair is going white. When he gets flustered his hair gets out of place and he looks like a comedian One night the blokes down at the pub tried to get him behind the microphone and tell a few jokes after the organist had done his usual set of Jim Reeves numbers. But Lewinski could only produce his deep down laugh. They let him sit down and the music went on until closing time and everyone was too drunk to stand up straight.
"How would you get back anyway?"
Stephen's face is a blur in the gloomy room where they have forgotten to switch the lights on.
"The Russians don't want you. You fought on the wrong side in the war."
***
The patches of land around Lewinskis houses are overgrown so he spends some evenings cutting back plants and ripping out weeds. Trains tear past noisily over the bridge and Lewisnski wonders where they're going and what it's like to be on one with somewhere to go. The chip shops start to open and the smell drifts across the back gardens. Upstairs lights are going on and people are playing records loudly or watching television.
Lewinski begins to get hungry and decides to go and buy a take-away meal. The thought of the solitary meal eaten in his parked car fills him with happiness.
He will arrange the tin foil containers on his lap and eat,and be satisfied far more than when dining in the company of other people.

END OF PART ONE.