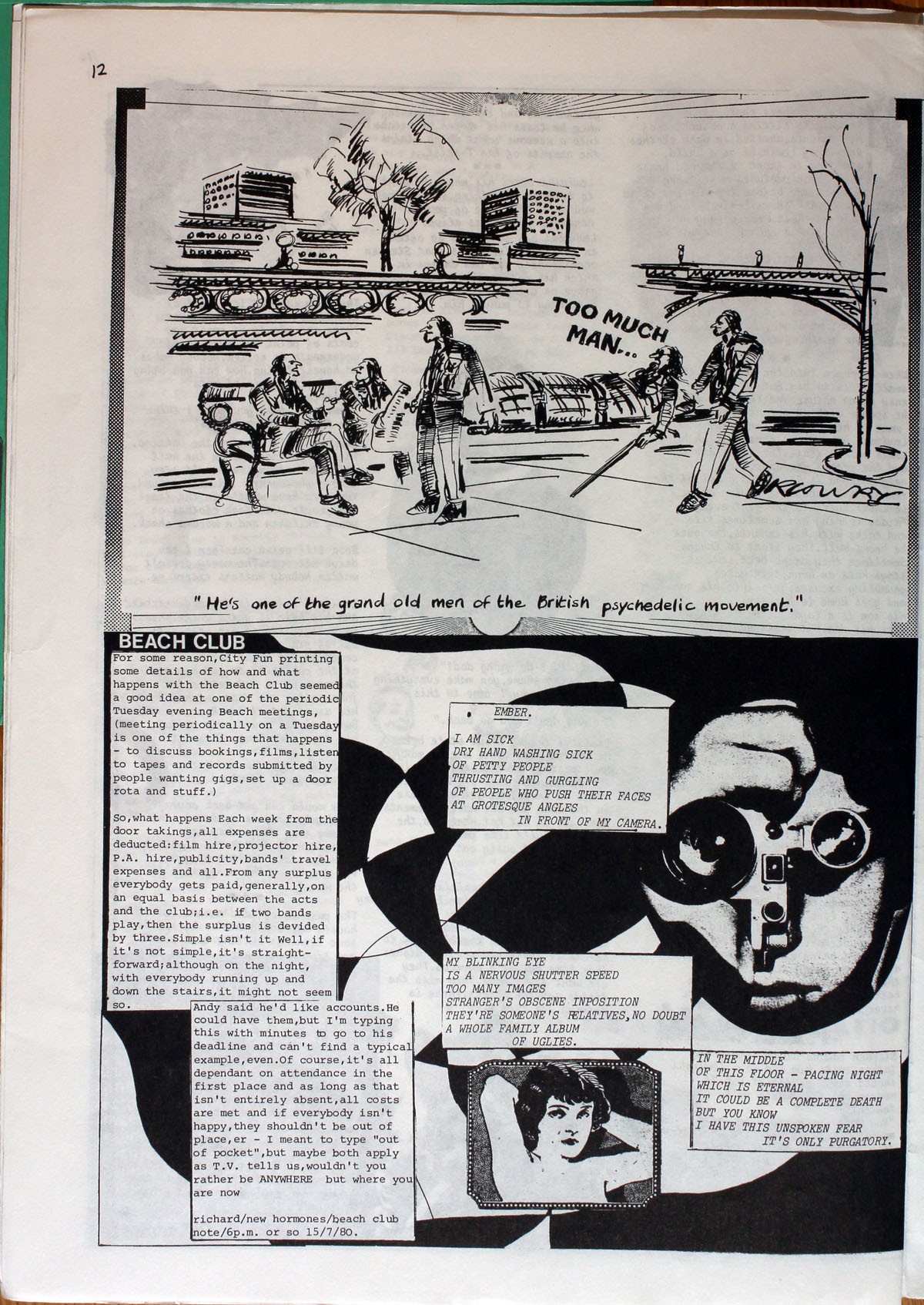 TRANSCRIPTION:
[Top of the page, Ray Lowry Cartoon. Caption: "He's one of the grand old men of the British psychedelic movement."]

For some reason,City Fun printing some details of how and what happens with the Beach Club seemed a good idea at one of the periodic Tuesday evening Beach meetings, (meeting periodically on a Tuesday is one of the things that happens — to discuss bookings,films,listen to tapes and records submitted by people wanting gigs,set up a door rota and stuff.)
So,what happens Each week from the door takings,all expenses are deducted:film hire,projector hire, P.A. hire,publicity,bands' travel expenses and all.From any surplus everybody gets paid,generally,on an equal basis between the acts and the club;i.e. if two bands play,then the surplus is devided by three.Simple isn't it Well,if it's not simple,it's straight-forward;although on the night, with everybody running up and down the stairs.it might not seem so.
Andy said he'd like accounts.He could have them,but I'm typing this with minutes in go to his example,even.Of course,it's all dependant on attendance in the first place and as long as that isn't entirely absent,all costs are met and if every body isn't happy,they shouldn't be out of place,er - I meant to type "out of pocket",but maybe both apply as T.V. tells us,wouldn‘t you rather be ANYWHERE but where you are now
richard/new hormones/beach club
note/6p.m. or so 15/7/80.

I AM SICK
DRY HAND WASHING SICK
OF PETTY PEOPLE
THRUSTING AND GURGLING
OF PEOPLE WHO PUSH THEIR FACES
AT GROTESQUE ANGLES
IN FRONT OF MY CAMERA.

MY BLINKING EYE
IS A NERVOUS SHUTTER SPEED
TOO MANY IMAGES
STRANGER'S OBSCENE INPOSITION
THEY'RE SOMEONE'S RELATIVES, NO DOUBT
A WHOLE FAMILY ALBUM
OF UGLIES.

IN THE MIDDLE
OF THIS FLOOR-PACING NIGHT
WHICH IS ETERNAL
IT COULD BE A COMPLETE DEATH
BUT YOU KNOW
I HAVE THIS UNSPOKEN FEAR
IT'S ONLY PURGATORY.