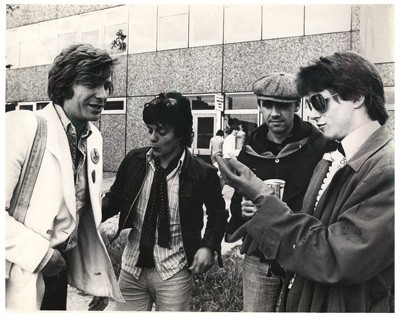 A photo from Tosh Ryan (in the hat) with Tony Wilson, and Mike Rossi and Wayne Barrett of Slaughter & the Dogs outside the Civic Centre, Wythenshawe.

Tosh thinks this may have either been when S&TD were signing to Rabid, or possibly Decca. Or he may be wrong and it's neither of those! This could be 1976 or '77.

davcru Says –
This photograph is taken outside the Dole Office, Wythenshawe

Steve McGarry Says –
I think this was probably when Slaughter signed to Decca. Mike's brother, Ray, managed the band, and he came up with a publicity wheeze - which is why Tony was there. Suitably inspired by the Sex Pistols signing their record contract outside the gates of Buckingham Palace, he decided that Slaughter would make a grand symbolic gesture and sign to Decca outside the dole office. I don't think he had an actual contract on the day, so I vaguely recall that they signed his gas bill or a summons, or something like that. It was more likely 1977 or even 1978, I think?
If you'd like to leave a comment, please Login. Login
Manchester Digital Music Archive is licensed under an
Attribution-NonCommercial-ShareAlike 4.0 International License.
Charity no. 1164179
Our archive currently contains 3760 Bands, 739 DJs, 1426 Venues, 286 Industry Professionals and 28012 artefacts contributed by 3879 members.