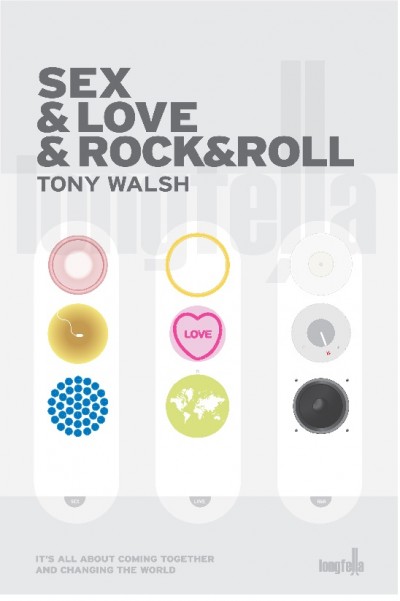 This is the cover artwork for my first full collection of poetry, SEX & LOVE & ROCK&ROLL, published in March 2013 by indie press, Burning Eye.

The logo and cover artwork are by my friend and Prestwich neighbour, the very talented Dave Kirkwood.

The poem that I wrote as the official website Poet in Residence for Glastonbury Festival in 2011.

The poem that I wrote for the Kendal Calling programme as festival Poet Laureate in 2012.

My tribute poem to John Peel, as broadcast on BBC6music and twice on BBCRadio 2.

A sonnet (yep!) that I wrote about The Clash, the video for which was shared by Billy Bragg on Facebook calling it "a call to arms for young bands."

All alongside poems of love, loss, relationships, family life, comedy, politics - all sorts.

John Hegley has called the book "Fired and inspiring!" Whilst quotes about poems within it, include:


"Sex & Love & Rock&Roll is a book to unite and inspire us.
"It's all about coming together
and changing the world."

Further details, reviews, PayPal link etc can all be found via my website below. Cheers.
Artefact added : 4th June 2013
by Tony/Longfella