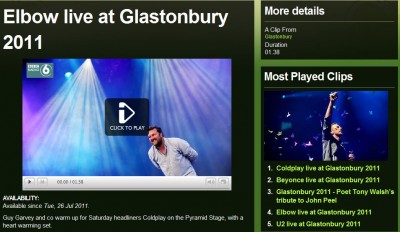 In June 2011 I was the official website Poet in Residence for Glastonbury Festival. As such, I wrote a tribute poem to John Peel and performed it live on Cerys Matthews' BBC6Music show from behind the main stage during Elbow's epic sundowner performance. I also went on Jo Whiley's show with it a week later, the poem made her cry off air.

Some months later was the anniversary of John's death and Jo Whiley played the poem again. The link was (is) still on the BBC Glastonbury iPlayer and it went mad on Twitter. For one glorious day I was bouncing around the iPlayer Top 5 with the likes of Elbow, U2, Coldplay, and Beyonce. I like to think that John would have enjoyed a little chuckle about that.

The artefact is a screengrab from the BBC website.

The original broadcast can still be heard at: www.bbc.co.uk/pro...

And the poem is now included in my debut collection, SEX & LOVE & ROCK&ROLL, available from the link below.
Artefact added : 4th June 2013
by Tony/Longfella