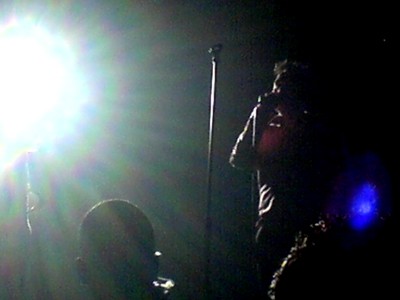 A photo taken from my mobile phone of Mozza on stage at the Lowry. I was at the end of the second row and had loads of space until the last few songs when suddenly a hundred paople came and trod on our toes and made it very uncomfortable. Still it was a good show.

From where I was stood the guitar sound was coming out of the guitarists amp right infront of me, the massive chugging guitar on How Soon Is Now sounded amazing because of that!

There was some guy shouting stuff about The Nosebleeds at Morrissey to which he replied that "the past is a nice place to visit but i wouldn't want to live there..." (Moz auditioned for and may have sung for The Nosebleeds, allbeit very briefly back in the late 1970s).

Amazingly I bumped into a friend I haven't seen for about 10 years who lives in Kent. We're now in touch...
Artefact added : 5th June 2007
by mat

Abigail Says –
Quite a cool picture! I was offrered free tickets to this gig but couldn't go cos I was on holiday in Wales. Gutted.
If you'd like to leave a comment, please Login. Login
Manchester Digital Music Archive is licensed under an
Attribution-NonCommercial-ShareAlike 4.0 International License.
Charity no. 1164179
Our archive currently contains 3869 Bands, 758 DJs, 1460 Venues, 323 Industry Professionals and 29710 artefacts contributed by 4047 members.