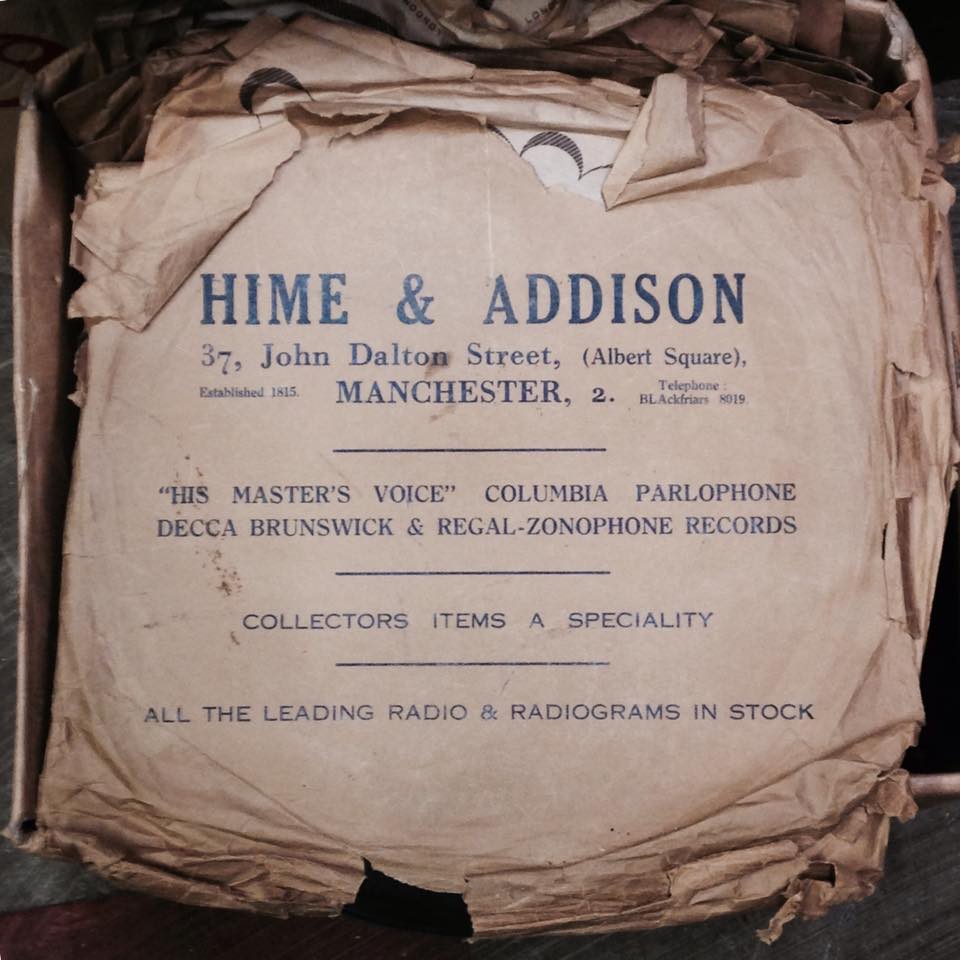 Photo of a box of 78s taken by Eddy Rhead. Many 78s during this period had adverts for the shops that were selling them on the sleeve.

I would be very interested to hear from anyone who remembers Hime & Addison on John Dalton Street (est 1815).

The year is a guess.

Regal Zonophone Records was a British record label formed in 1932, through a merger of the Regal and Zonophone labels. This followed the merger of those labels' respective parent companies - the Columbia Graphophone Company and the Gramophone Company - to form EMI. At the merger, those records from the Regal Records catalogue were prefixed 'MR' and those from the Zonophone Records catalogue were prefixed 'T'] Record releases after the merger continued using only the 'MR' prefix.

margaret Says –
I remember Hime & Addison on John Dalton Street very well from the 1970's as I purchased many tickets from the box office located within the store. My friend and I even queued up all night outside the store to purchase tickets for Emerson Lake & Palmer at the Free Trade Hall in November 1972. Those were the days when you could purchase tickets a couple of weeks before the actual performance and not have to wait nearly a year before you get to see the band!

Coe1951 Says –
I worked at Hime & Addison in the late 60's early 70's. I worked downstairs in the 'modern music' department and also in the box office for concerts at the Free Trade Hall (great because we got to see a lot of the concerts free). Old Mr Ansel was a lovely man to work for. I miss that sort of shop so much! 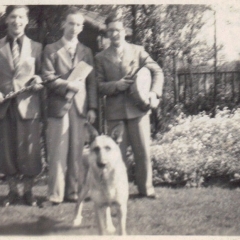 barryt Says –
I think that this was probably Noah Ancill, manager of the radio and records dept. He was a friend of my late Uncle Roy Mansell.

Barbara Elliott Says –
I had a pin money job working for Hime and Addison at the Free trade hall,Sunday night concerts. I worked with my friends Joan Prince and Sylvia and Gloria Davies. Joan and I worked in the balcony,Sylvia and Gloria were downstairs. We were selling programmes and showing people to their seats. Once the interval finished we were free to watch the show and got paid for the privilege. It was mainly Jazz groups e.g Acker Bilk,etc but also Shirley Bassey. Happy days! 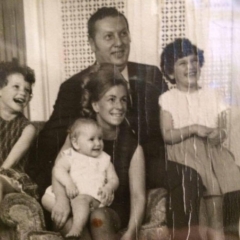 Debbie Magid Says –
Hi my father was Barry Ancill, my grandpa was Noah Ancill. I remember spending many hours in Hime and Addison when I was a little girl! It’s so nice to read all these memories and comments! I remember the queues for tickets for conversation, sometimes all the way round the block! 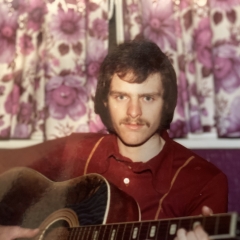 Barry b Says –
Spent many hours talking with Noah who loved taking photos at concerts as I did. I queued for many hours for tickets and bought records from the basement there. I new Barry better though and ended up working with him in his ticket agency. He was a lovely man and was always so interesting to talk too. He once asked my wife and I to his home as a thank you for chaperoning his daughter to a concert!! I miss those times so much.

Mike Noon Says –
Hello Barry B. Thank you for joining us. I'm intrigued about your photos. When was this? And are you able to share any here? 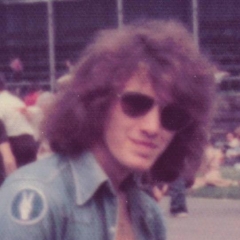 Brian Cooper Says –
One of the first comments on this page from Margaret in 2014 recalls queuing all night for concert tickets in the early 70's which I did on a number of occasions (even for the same ELP concert as her!). On one memorable Saturday evening we arrived at about 10pm (the Box Office opened the following morning at 10am). It was a freezing night and sleeping on the pavement, which was difficult at the best of times, was all but impossible. Completely unexpectedly the owner (possibly Mr Ancill as above?) turned up at 4am on Sunday morning to open the shop and sell tickets to the shivering punters, quite possibly closing up again when the queue had disappeared until the normal opening time some hours later. What a hero! Funny how little acts of kindness like that remain with you some 50 years later...

Debbie Magid Says –
Brian it is just so lovely to hear those comments. As a child I would go with my dad Barry Ancill and we would check out the queues and then dad would decide to open early as it wasn’t fair!! It was so exciting for me seeing the people laying in sleeping bags on the floor waiting to get tickets. Years later I worked with him and we would open up at the crack of dawn to release tickets for really popular gigs. Such a buzz! Such exciting times!

Barry b Says –
Hi Mike, took photos at free trade hall and later at the Apollo.have photos of ABBA at free trade, moody blues, elp, deep purple, Uriah heep, the faces, stray, led zeppelin, even Barry manilow at Apollo! Just to name a few. Still have negs of some of the gigs. Will shoot some and add

Barry b Says –
Debbie, I remember going to your wedding with my wife and guys from Piccadilly records and going to the wrong synagogue!!! Managed to sneak out and arrive at your wedding just in time. Your dad laughed so much when we told him!!????

Barry b Says –
Debbie, I remember going to your wedding with my wife and guys from Piccadilly records and going to the wrong synagogue!!! Managed to sneak out and arrive at your wedding just in time. Your dad laughed so much when we told him!!????

Debbie Magid Says –
Barry that is crazy!! I was obviously oblivious at my wedding?

Barry b Says –
Your dad didn’t say which synagogue it was so we separated of my wife and the girl from Piccadilly records and myself and the guy on the other side. We realised after ten mins that there was no one we knew. Passing hand signals across the synagogue to make a silent exit, we arrived just in time at the right synagogue to see you wed. So funny at the time and your dad laughed so much when we told him. Loved working with your father so much. When he retired and I moved out of working in central Manchester to work in education. We lost touch, sad how easily that happens. Now teach photography at Trafford college and often talk to students about gigs and print images for them of bands, that all started thanks to watching your grandfather at free trade hall????

Debbie Magid Says –
Barry what year did you work for my dad? Why can I not remember you - can you send me a pic? Please ....

Barry b Says –
It’s old age ???????? went to a gig with you Brian adams at gmex. Any occasional went for a drink with you at lunch. Can’t remember the year but it was when you’d just started going out with mark. I new Joanne your friend as well. I even decorated a room at her first house! She went with me to see billy joel at nec.I just used to come in shop at lunch as I worked as a graphic designer in Manchester. I gave you a $20 bill in a frame as a wedding present with an open in emergency note ???? will upload an image when I can find one from that time period

Barry b Says –
People have asked me to upload some concert pics. People mentioned elp so I’ve uploaded those and odd pic of abba and Ritchie Blackmore. They’re under free trade hall ????

Mike Noon Says –
They are indeed, Barry. Thank you. I love your picture of Abba.

Coe1951 Says –
I remember that The Spinners folk group thought a lot about your Grandfather Debbie. We would all drink in the bar of the Free Trade Hall with them in to the early hours. Sadly only 2 of them are still with us.

Barry b Says –
Hi debs have added an old pic of me taken in about 1976. The Bryan adams gig was December 87 but I should still be recognisable!!

Debbie Magid Says –
Hi Barry,
Yes! OMG I am really getting old..... I love the pics. I was at ABBA and remember having the privelege of meeting them backstage afterwards. I dont have any pics but I have every ticket from almost every gig from the 80's onwards.... I miss going to concerts so so much right now
If you'd like to leave a comment, please Login. Login
Manchester Digital Music Archive is licensed under an
Attribution-NonCommercial-ShareAlike 4.0 International License.
Charity no. 1164179
Our archive currently contains 3714 Bands, 737 DJs, 1367 Venues, 252 Industry Professionals and 26432 artefacts contributed by 3773 members.