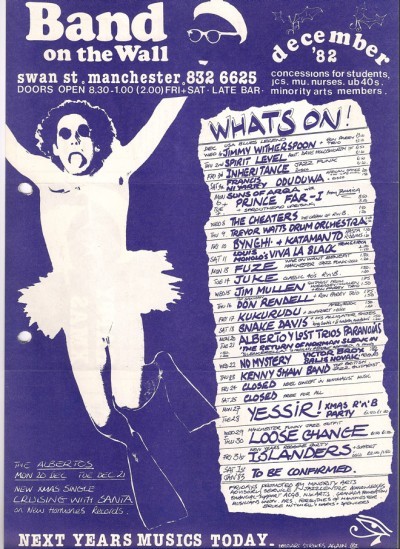 Oduduwa were an African band lead by Tafa Onigbanjo. They were around until the late 80's and played many gigs at the Band On The Wall.

Many personnel featured within the band over the years and the line up always revolved around Tafa on Congas, who also lead the African music workshops.
Artefact added : 5th June 2007
by dave

mat Says –
and that is CP Lee wearing the Tutu!

circle alcove Says –
Tafa on Congas was actually Mustapha Onigbanjo, A Nigerian Yoruba who came over to Manchester in the late 50's. I studied African drumming in a school in Moss side with him twice a week at his evening classes for a couple of years in the mid/late 80s. He taught Hi Life, JuJu, and kpanlogo rhythms and was very much a traditional african style teacher. He also taught the children at the school there, he said they were great at drumming. The school (or perhaps the all saints adult ed. centre on Oxford road) had funded the purchase of a lot of congas and Kpanlogo drums. It was a really great resource to have him teaching there. Sometimes he would bring his evening class pupils down to the gigs at the band at the wall and do a bit of a presentation of the rhythms before oduduwa came on, or we would play along with oduduwa. Sometimes we would play drumming for an African dance Class to perform to.
Mustapha said he was a sax player in Nigeria but when he came to England his drumming was what was unique about him,whereas in Africa his drumming was just ok, as there were so many brilliant drummers. He said he got some work doing film music and so forth in the 60's for fast car chase clips , and he would play mad fast drums to it.
In the early classes he would teach some of the sacred rhythms of Africa but as time went on he stopped teaching them. He said he always explained to his pupils that those rhythms were a spiritual heritage, and were used to heal people, and to call for help from spirits. He said they should only be played in special places,at a shrine, in the woods, or in private place for prayer and so forth. One day he found some drummers busking with those rhythms and he was very saddened by it. Many of the people I knew at his class, myself included , were very interested in learning about the that spiritual side of music, as we felt that it was an important aspect that was now lacking in contemporary consumer use of music. Sometimes we, his students, would compare snippets of those sacred rhythms and try and understand them. They were often complex, 12/8 timings, very different to our understanding of music.. We all felt sad that he had been so let down, and decided never to use those rhythms in such a way. .

The folk in those days who turned up to Mustapha's Class were pretty serious freaks, I remember one guy used to always come bare foot, even in the snow, and he carried a massive conga on his head. Many of us had died hair or dread locks and so forth and wierd/ ripped clothes and Mustapha took it in his stride and used to just smile and laugh. He said he could never figure out the Brits as they could be so snobby and stuck up but at the same time they loved rhythm and could be really wild.

I left Manchester in the late 80's. I had asked for his pemission to pass on his teachings before I left as I was doing some classes for children and so forth, and he was very pleased I was taking his teachings with me. I still teach african drumming to this day and would have had no starting place without his kind, playful teaching and his wisdom. I dont know what happened to him,
I hope he is alive and well but I think he would be getting on by now if he's still with us.. I owe him a lot and would be greatful if anyone could post up what became of him. I remember he was friends with the conga player from Harlem spirit and the two of them would sometimes play with the drummers at the advanced class, playing wonderful stuff way out of our reach. Mustapha could get a better sound out an old table top than any drummer I knew could get out a top conga. On a drum he had a sound like an axe through wood. Ashe Ashe to you Mustapha Onigbango, wherever you are.

Abigail Says –
Thanks for all the info and uploads recently!

Joe.birch15 Says –
Hi circle alcove mustapha onigbanjo was my grandad who died before I was born, I'm 15 so he died a long time ago. My email address is jjjjobh@hotmail.co.uk please could you contact me to tell me more about who he was as I'm very curious, thanks joe.

ColinDuff Says –
Thanks so much for writing this, great to hear more about Tafa. I played trumpet with Oduduwa from 1986 to 1990. He was a great mentor to me when I was starting out in improvised music, and raised the level of anything he played. I think the band was reformed in 1986 after he'd been ill for a while, and it was pretty ropey to start with, but he gradually brought in better and better players till it was really cooking. We played lots of gigs around Manchester - for the Nigerian ambassador at one of the big hotel ballrooms, the Green Room, regular Band on the Wall slots, as well traveling to Canterbury in a council mini bus to play at the cathedral at an inter-faith event.
I remember him playing what he called "authentic" rhythms at his home with a Jamaican drummer called Joe (maybe the Harlem Spirit player?), Tafa said "once while I was playing this rhythm a spirit appeared before me, but I just kept playing." I couldn't figure the rhythms out, there didn't seem to be any barlines or regularities, just like a fast flowing and never stopping river of energy, I've still never heard anything quite like it.
He was always great to listen to, never a dull moment, a great listener who could always come in with something that would uplift what was going on.
Tafa was very kind to me and some of the others in the band (though he had no qualms about sacking people also when he wanted to move on).
He had a leg amputated in 1989? after a severe foot infection, but he had no trouble playing and driving drums and instruments around, but he died in 1991, I always thought it was to do with complications from the infection but I never heard for sure. Tafa was a warm and talented man.

dave Says –
Really interesting reading all this. I've still got the recordings of some of the gigs we did at BOTW. Although I wasn't involved in the band for long, still have very fond memories of Tafa and other musicians in the band and the rehearsals under the Boardwalk. Remember a nice song called Malika too :-)
If you'd like to leave a comment, please Login. Login
Manchester Digital Music Archive is licensed under an
Attribution-NonCommercial-ShareAlike 4.0 International License.
Charity no. 1164179
Our archive currently contains 3860 Bands, 758 DJs, 1458 Venues, 316 Industry Professionals and 29648 artefacts contributed by 4039 members.