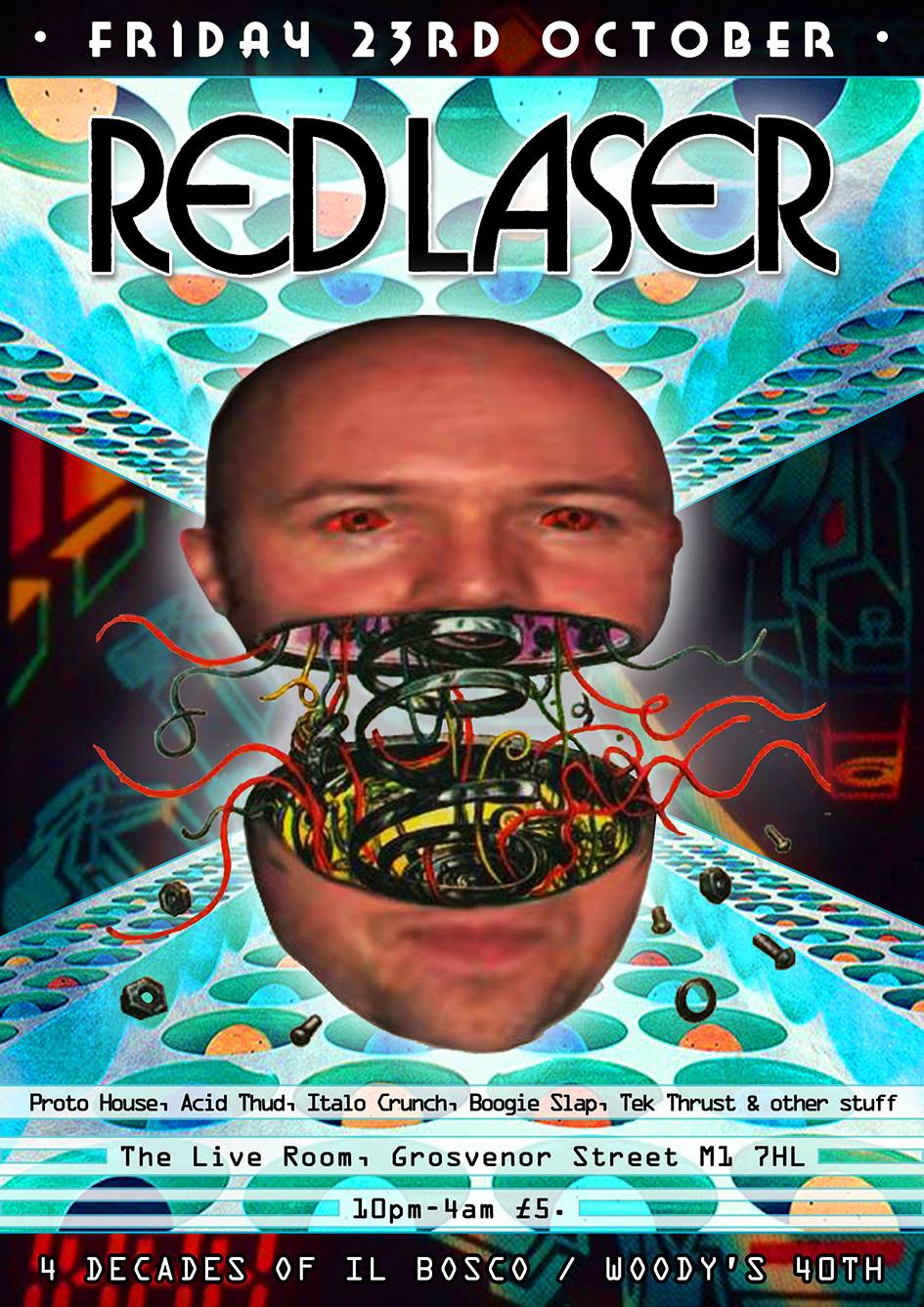 This was a 40th birthday bash for one of Manchester's most supremely talented, hard working and impressively musical DJs, Christian Wood.

Christian has a number of guises. Back in the late 90s-00s when playing at the legendary Friends & Family nights at the Roadhouse (and elsewhere) on a funk/soul/disco/hip hop/reggae sort of tip he was known simply as Woody.

Years later he did a few legendary gigs and mixes under the moniker Crowhead. These were 90s break hardcore sets.

These days he more commonly uses the name Il Bosco and indulges his obsession with italo disco at his Red Laser Disco shindigs at various venues across the city. He also releases music and mixes on on a record label of the same name in partnership with Fat City Recordings.

Woody's 40th was at The Live Room (formally Man Alive) on Grosvnenor Street. It was a brilliant bash with greats sets from all DJs, particularly Sonofapizzman, who also works with DJ/graphic designer/wordsmith Randy Marsh on the 'Full Beam' project. Randy Marsh's really name is Adam O'Bern. Adam designed this flyer and also wrote the text for Woody's bash below:

4 decades ago, deep in the Mancunian astro-belt an abnormal electromagnetical hyper-surge in the Irlam quadrant created a sub-dimensional bulb-hole in space time just the right size for a single Boscoid to squeeze out from. 40 orbits later that same being has commanded a birthday Red Laser be thrown in his honour with these stipulations…

1. Venue must have mind-blowing visuals pre-installed.
2. All known gees, old and new must attend.
3. Flyer must feature his effigy.
4. Sound system must be mega.
5. Party must be a fiver in.
6. All participants must have a buzz.
7. A cake must be supplied.
8. Music must be all bangers and no clangers.

As our fearless chief cruises past the 40 mark we celebrate with a trip into new territory… ‘The Live Room’ on Grosvenor Street (Formerly ‘The Park’ night club… yeah the one where they used to make you throw your weapons in the bush outside before letting you in) will play host as we mark this milestone. To say the place has undergone a ‘Red Laser’ friendly facelift recently is a bit of an understatement (refer to vid), with a lightshow that will make you feel like you’ve woken up bumming (or getting bummed by) an electric sheep. The gaffs been done up proper and we’re getting the privilege of being some of the first to use it after its latest transformation.

Friends. Dash your doghouses in the nearest skip, get yer boings in early and clear your Filofax for this one.


£5 tickets will be available soon at: thepyramidsuite.b...

More details to trickle out…