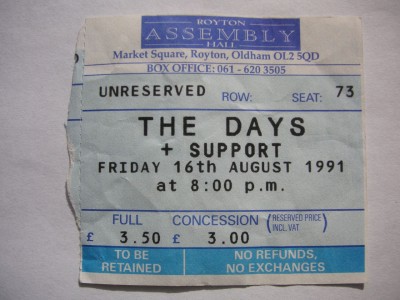 I thought I’d post this up as a little known band in a little used venue.

I first saw The Days earlier that summer at a free festival thing at Hopwood Hall College in Middleton –I’ve seen no mention of it since. Was it a Heineken sponsored thing? (Probably!)

I known that The High played and suspect maybe The Mock Turtles did too – I saw them a few times around this time. I recall they had an enthusiastic, riff-tastic guitar/vox frontman and obviously liked them enough to go to this headlining gig and to buy their 12” single – which I can’t quite lay my hands on today.

philplatt Says –
The Days were managed by a music journalist called John Slater, I recorded them at some point at my 'New Underground, studios which was in my houses basement in Disley, the record company was also called 'The New Underground' and had it's offices at my music shop in Hazel Grove, see news cutting:

timaduncan Says –
The festival at Hopwood Hall was a Heineken sponsored gig, I think Carol Wright was the promoter who used to run the Hurricane Club in Oldham for a while and with Heineken put some gigs on at the Uni-Bar in Manchester.
If you'd like to leave a comment, please Login. Login
Manchester Digital Music Archive is licensed under an
Attribution-NonCommercial-ShareAlike 4.0 International License.
Charity no. 1164179
Our archive currently contains 3728 Bands, 739 DJs, 1410 Venues, 255 Industry Professionals and 27312 artefacts contributed by 3817 members.