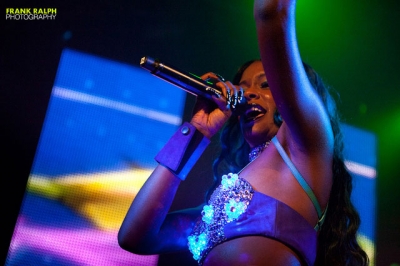 er started with ‘Out of Space’, which unsurprisingly, few audience members were familiar with. Despite initial microphone issues, the 21 year old managed to well and truly energise the diverse crowd of young teens, student ravers and middle aged house/hip-hop lovers.

Leaving DJ Cozmo to improvise and the audience in a state of perplexity, she then fled the stage. To our relief, Azealia reappeared to perform ‘Fierce’ with support artist Zebra Katz. With lyrics that run at 100mph, the Harlem rapper delivers line after line with unique precision; it really was amazing to witness her cut-throat lyrical style firsthand.

Miss Banks leaves the stage for the third time, forcing us to endure a performance by one of her backing dancers, ‘Bambi’. The dance act did very little in providing entertainment, as it diverged drastically from the energy-pumped performances that defined the Fantasea set. The Caribbean-influenced ‘Jumanji’ signalled her re-entrance, followed by a performance of the popular hit ‘L8R’.

The crowd went wild for her performances of ‘1991’ and ‘Luxury’, but perhaps the best reception from the crowd came during “The Azealia Banks Anthem”- ‘Liquorice’. ‘Esta Noche’ resulted in an alcohol induced rendition of the sampled chorus to ‘Get It On… Tonite’, from the 90’s R&B classic by Montell Jordan. The well-known ‘212’ provided the finale, with the sold out venue throwing cups, removing shirts and screaming “I guess that cunt getting eaten” in unison before bursting out of the venue, desperate for the cold mancunian air.