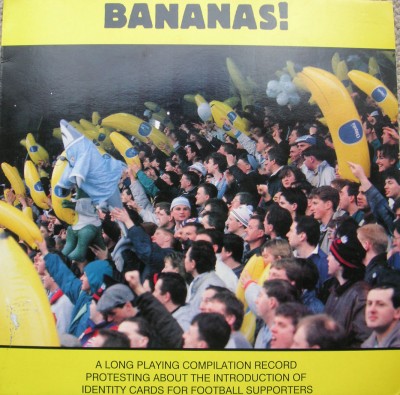 Front cover of 1988 "Bananas!" compilation LP. A fundraiser for the Football Supporters' Association in their campaign against ID cards for football fans.

The excellent photos (front and back) are by Kevin Cummins and are taken at Maine Rd at a time when taking all manner of wacky inflatables to the match was the thing to do!?

Anti-ID card sleeve notes are by John Duncan of "When Saturday Comes" 'zine.

There is an M12 postal address for an organisation called "Rodney, Rodney" and the record is catalogued as Rodney1. ( References to Man City favourite Rodney Marsh).

The track listing is presented as an FA Cup fixture list with The Waltones aligned to MUFC, Dub Sex to Stockport County, Frank Sidebottom to his beloved Altrincham, Too Much Texas to Locomotiv Plovdiv and The Delmontes to "Dundee or Stoke City"