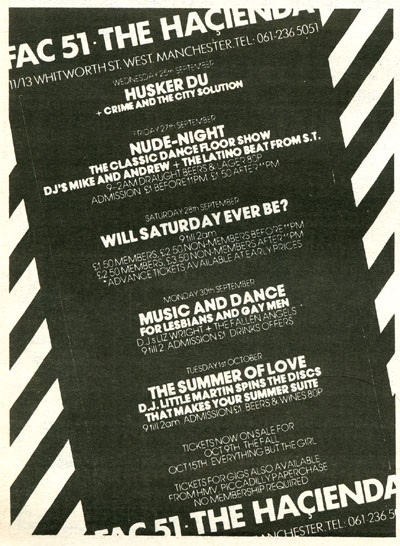 An example of The Hacienda's adverts during 1985.

This one features Husker Du supported by Crime And The City Solution on the live front, the other events are all club nights and include Little Martin's Summer Of Love.
Artefact added : 5th June 2007
by jsz

mat Says –
what was little martin's summer of love? seems 3 years earlier than most people see as the SOL

Tony/Longfella Says –
We debated this date when I posted the specific flyer for the summer of love night if you recall, Mat?

mat Says –
oh dear! my memory isn't what it never was before

Alastair Says –
I was at the Husker Du gig.Also when they played the International I remember becoming briefly an ad hoc bouncer, partly to stay alive in the crush at the front of the stage. Roger Eagle ( at least I think it was him ) turned to me and said "You're doing a good job!"
Most of the times when I went to the Haçienda it was to see bands- The Undertones, X mal Deutschland, The Fall, The Three Johns, New Model Army to name a few off the top of my head.
If you'd like to leave a comment, please Login. Login
Manchester Digital Music Archive is licensed under an
Attribution-NonCommercial-ShareAlike 4.0 International License.
Charity no. 1164179
Our archive currently contains 3861 Bands, 758 DJs, 1458 Venues, 316 Industry Professionals and 29645 artefacts contributed by 4033 members.