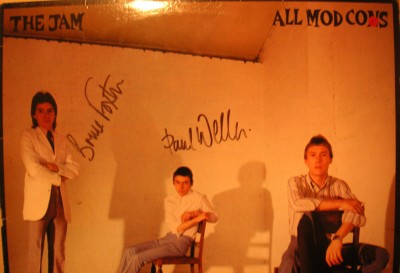 Autographed Jam album from a soundcheck at the Apollo 1980 (or was it 79?)

I can honestly say that Paul Weller gave me my first taste of lager. I often hung around the back door of the Apollo from the age of 14 in 79. I met the Ramones, Stranglers, Skids, etc that way. In keeping with their "band of the people" reputation when The Jam arrived in late afternoon they let the assembled couple of dozen kids in for the soundcheck. Can you imagine the thrill - the Jam were massive at this point!

I was leaning on the stage when Paul sauntered out and cracked open a can of McKewan's Export - the one with the cavalier on the tin. As he took a swig, I asked him for the can when he'd finished with it, but he knelt down and gave it straight to me, getting himself another one. Kids clamoured for a swig but I reclaimed it and he signed it afterwards. I got a couple of albums signed but, foolishly, gave one to a girlfriend for Xmas!

With a lager can in my hand the bus driver made me pay full fare on the way home but I didn't care.

This copy of All Mod Cons is also signed on the back by Rick Buckler. The lager can, sadly, went rusty in a damp cupboard in the late 80's and had to be chucked.

The red price sticker is from the much-missed Yanks record shop (later Power Cuts) which was near the Peveril of the Peak, behind where Rotters was on Oxford Rd.
Artefact added : 5th June 2007
by Tony/Longfella

do you know if morrissey ever worked at yanks? i've heard that he did, but no-one i know remembers him there.

mat Says –
actually i just remembered a nice linking story- after the smiths split Moz was asked if he was in touch with the other ex-band members, and he said that he occasionally spoke to Marr but had never heard from "Rick and Bruce"!

Tony/Longfella Says –
I can picture a couple of the staff but not Morrissey. My friend Louise worked there for a while. Didn't Ian Curtis used to work in a record shop - was it Rare Records on John Dalton St?

jsz Says –
I believe that was the one, now a restaurant isn't it?

mat Says –
was that the savoy book shop place?

jsz Says –
No, that was on Peter Street near what was The Gallery. The block that housed them both was demolished and is now a bar (opposite Life Cafe).

pjh Says –
Memory plays strange tricks nowadays, but I'm pretty certain I was served by Morrisey at Yanks (the home of the cutout album)
If you'd like to leave a comment, please Login. Login
Manchester Digital Music Archive is licensed under an
Attribution-NonCommercial-ShareAlike 4.0 International License.
Charity no. 1164179
Our archive currently contains 3745 Bands, 739 DJs, 1423 Venues, 277 Industry Professionals and 27962 artefacts contributed by 3878 members.