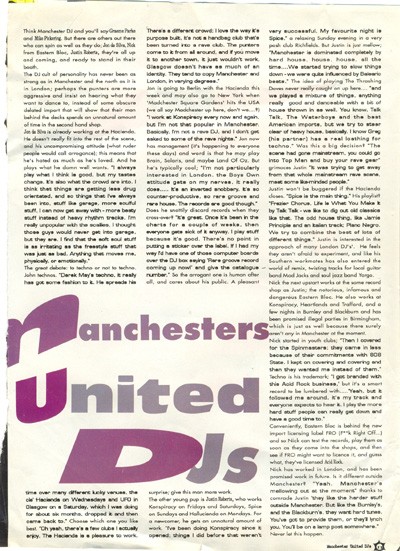 part 2 - the writing - there appears to be some weird gaps here but you get the gist!

Think Manchester DJ and you'll say Graeme Parke
and MikePickering. But there are others out there
who can spin as well as they do;Jon da Silva, Nick
from Eastern Bloc, Justin Roberts, they're all up
and coming, and ready to stand in their booth.

The DJ cult of personality has never been as
strong as in Manchester and the north as it is
in London; perhaps the punters are mora
aggressive and insist on hearing what they
want to dance to, instead of some obscure
delated import that will show that their man
behind the decks spends an unnatural amount
of time in the second hand shop.

Jon da Silva is already working at the Hacienda.
He doesn't really fit into the res.1 of the scene,
and his uncompromising attitude (what ruder
people would call arrogance); this means that
he's hated as much as he's loved. And he
plays what he damn well wants. "I always
play what I think is good. but my tastes
change. It's also what the crowd are into. I
think that things are getting less drug
orientated, snd so things that I've always
basn into, stuff lika garage, mora soulful
stuff, I can now get away with - more beaty
stuff instead of heavy rhythm tracks. I'm
really unpopular with the scallies, I thought
those guys would navar gat into garage,
but they are. I find that tha soft soul stuff
is as irritating as tha freastyle stuff that
was just as bad. Anything that moves me.
physically, or emotionally.'

The great debate: to techno or not to techno.
John technos. "Darek May's techno. it really
has got some fashion to it. Ha spreads his

There's a different crowd: I love tha way it's
purpose built, it's not a handbag club that's
been turned into a rave club. The punters
come to it from all around, and if you move
it to another town. it just wouldn't work,
Glasgow doesn't have as much of an
identity. They tend to copy Manchester and
London, in varying degrees."

Jon is going to Berlin with the Hacienda this
week and may also go to New/ York when
'Madchester Square Gardens' hits the USA
(we all say Madchester up here, don't we-...?)
"I work at Konspiracy every now and again.
but I'm not that popular in Manchestar.
Basically. I'm not a rave DJ. and I don't get
asked to some of tha rave nights." Jon now
has management (it's happening to everyone
Brain, Solaris, and maybe Land Of Oz. But
he's typically cool; "I'm not particularly
intersted in London. The Boys Own
attitude gets on my nerves, it really
does..... it's an inverted snobbery. It's so
counter-productive, so rare groove end
rare house. The records are good though."
Does he snottily discard records when they
cross-over? "it's great. Once it's been in the
charts for a couple of weeks, then
everyone gets sick of it anyway, I play stuff
because it's good. There's no point in
putting a sticker over tha label. If I had my
way rd have one of those computer boards
over the DJ box saying 'Rare groove record
coming up now!' and give the cataloguer
number." So the arrogant one is human after
.all, and cares about his public. A pleasant

vary successful. My favourite night is
Spice." a relaxing Sunday evening in a very
posh club Richfietds. But Justin is just mellow;
"Manchescer is dominated completely by
hard house, house, house, all the ...We
started trying to slow things
down - we were quite influancad by Balearic
beats." The idea of playing The Thrashing
Doves never really caught on up here.... "and
we played a mixture of things, anything
really good and danceable with a bit of
house thrown in as well. You know, Talk
Talk, The Waterboys and the best
American imports, but we try to stear
clear of heavy house, basicaly. I know Greg
(his partner] has a real loathing for
tachno." Was this a big decision? "The
scene had gone mainstream, you could go
into Top Man and buy your rave gsar"
grimaces Justin "It was trying to get away
from that whole mainstream rave scene,
meet some like-minded people."
Justin won't be buggered if the hacienda
closes. "Spice is the main thing," His playiist?
"Frazier Chorus. Life Is What You Make It
by Talk Talk - we like to dig out old classics
like that. The odd housa thing, lika Jamie
Principle and an Italian track: Piano Negro.
We try to combine the best of lots of
different thinga." Justin is interested in the
approach of many London DJ's'. He feels
they aren't afraid to experiment, and like his
Southern workmates has also entered the
world of remix, twisting tracks for local guitar
band Mad Jacks and soul Jazz band Yargo.

Nick the next upstart works at the same record
shop as Justin; the notorious, infamous and
dangerous Eastern Bloc. He also works at
Konspiracy, Heartlands and Trafford, and a
few nights in Burnley and Blackburn and has
been promised illegal parties in Birmingham,
which is just as well because there surely
aren't any in Manchester at the moment.

Nick started in youth clubs; "Then I covered
for the Spinmastars; they came in less
becausa of their commitments wrth 809
State. I kept on covering and covering and
than they wanted me instead of them."
Techno is his trademark; "I got branded with
this Acid Rock business.' but it's a smart
record to be lumbered with.....Yeah, but it
followed me around, it's my crack and
everyone expects to hear it. I play the more
hard stuff people can really get down and
have a good time to."

Conveniently, Eastern Bloc is behind the new
imporT licensing label FRO (F**k Right Off...)
and so Nick can test the records, play them as
soon as they come in and then
see if FRO might want to licence it, and guess
what; they've licensed AcidRock.
Nick has worked in London, and has been
promised work in future. Is it different outside
Manchester? "Yeah. Manchester's
mellowing out at the moment" thanks to
comrade Justin 'they like the harder stuff
outside Manchester. But Kks the Burnley's,
and the Biackburn'8. they want hard tunes.
You've got to provide them. or they'll lynch
you. You'll be on a lamp post somewhere."
Never let this happen.
Artefact added : 5th June 2007
by nick grayson

mat Says –
hi nick- if yopu have a bigger scan of this please email it to us and we can convert it into text so it can be read. thanks. mat (mdmarchive)
If you'd like to leave a comment, please Login. Login
Manchester Digital Music Archive is licensed under an
Attribution-NonCommercial-ShareAlike 4.0 International License.
Charity no. 1164179
Our archive currently contains 3661 Bands, 725 DJs, 1339 Venues, 232 Industry Professionals and 22070 artefacts contributed by 3597 members.