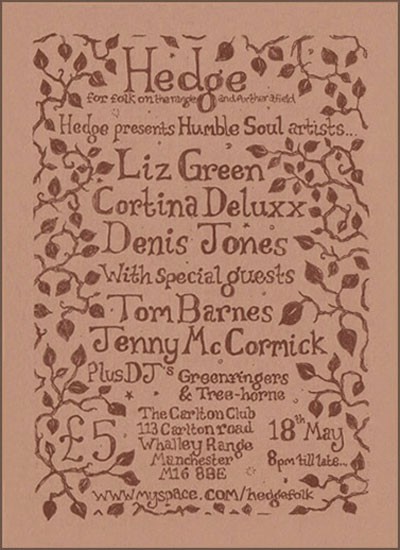 Hedge has become about the only club i go to regularly these days- infact it's pretty much the only club i go to unless it's a special event! must be my age! Hedge is a night run by Danny and JoJo of Cortina Deluxx and is a folky (witha bit of electronica), friendly night held in The Carlton Club, a working men's club on Carlton Rd, Whalley Range. Great place for bearded men and women... beer's about £1.80 a pint and spirits are as cheap. Hedge had a break for a couple of months recently, the first one on its return selling out befor 8.30! That's how popular it's become. We are in the midst of a 'folk revival' however.

This particular night was as excellent as usual. Most of the acts had just played at 'What tha Folk?' at Cornerhouse the week before... this was almost a replay! When we arrived about 9ish Jenny McCormick was already on, followed by Tom Barnes, both played respectable acoustic sets. But most were probably there to see the next three acts... Liz Green has that odd 'karen Dalton-ish' warbly style voice and a quirky way with rhythm and lyrics. She holds a lot of stage presence and really is pretty unique! Cortina Deluxx were excellent as usual... the band includes John Thorne on double bass who used to play with Lamb. The last on the night was Denis Jones who plays a set of elctronica-folk which build and builds. He kind of reminded me of a male Juana Molina in the way he uses samples and triggers to build up big soundscapes in his songs. a great night!
Artefact added : 5th June 2007
by mat

JaneD Says –
This looks like a really good night. I must check it out. See you there, maybe.

mat Says –
it's an excellent night- it really is.
If you'd like to leave a comment, please Login. Login
Manchester Digital Music Archive is licensed under an
Attribution-NonCommercial-ShareAlike 4.0 International License.
Charity no. 1164179
Our archive currently contains 3870 Bands, 758 DJs, 1461 Venues, 323 Industry Professionals and 29719 artefacts contributed by 4047 members.