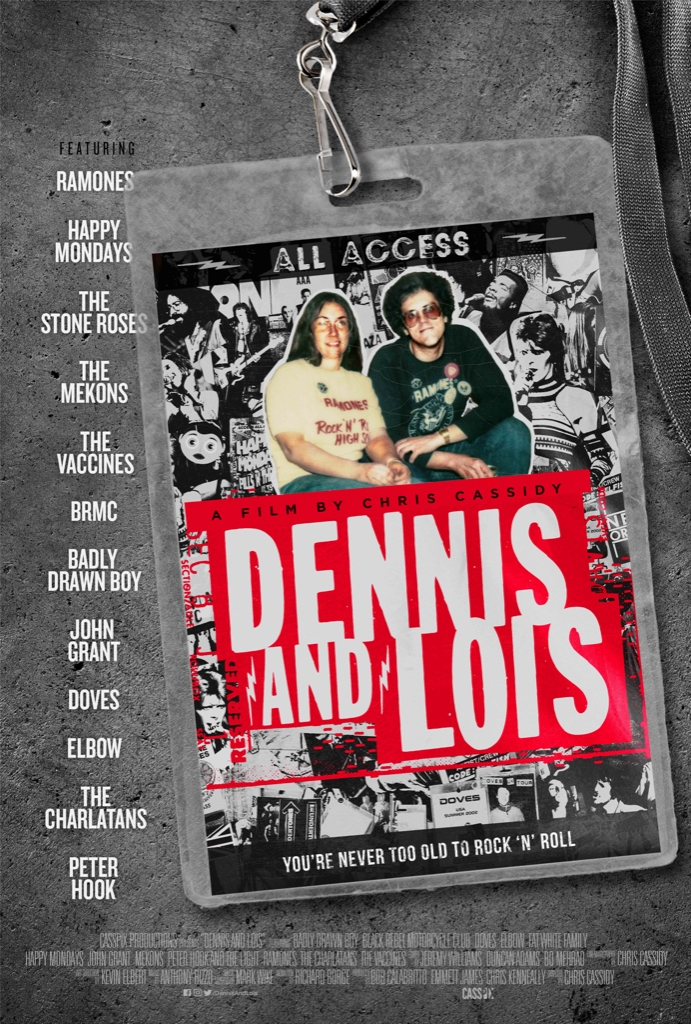 Next week sees the iTunes release of the documentary Dennis & Lois.
If you don't know their story and you're on this site, I can pretty much guarantee you'll love this film!
Dennis & Lois met in the mid 1970s and apart from 1 night have spent every day since with each other. A love of music and collecting helps keep them together - their house on the outskirts of New York is a shrine to pop culture. They count Manchester as their second home, and among their good Manchester-based friends are John Cooper Clarke, Marc Riley, Doves, Stone Roses, Peter Hook, Elbow and of course the Happy Mondays, who named a song after them. But they are close to loads of other bands, old and new including the Ramones who they toured with selling merchandise.
This film is the first full-length documentary about the couple who think nothing of driving a 500 mile round trip to watch a band they love, or take a couple of months off work to follow a tour around the USA. They even flew to the UK once to watch a gig before flying back the next day. Their 20s were spent hanging out in CBGBs and in fact you can see them stood mesmerised, watching the performers in many of the famous 1976/77 era photographs of CBGBs. The film is full of amazing stories and the perfect antidote to lockdown boredom. And Manchester is in it throughout...
Artefact added : 22nd April 2020
by OT

jimburton2000 Says –
Hello-
I saw your note about a John Peel show from 1984 or 1985 with Industrial Youth's "Sponge Bath". I also 'had' a cassette tape of this show, still have the track listing but have lost the tape itself. The show also included the almost as hard to find "Street People of London" by Triple Beat Alliance, never released commercially. Do you still have a tape of this show, that I could buy a copy of? Thanks!

OT Says –
Hi Jim. Thanks for your post - funny to think how many people must've recorded JP shows and possibly still have them. I'll have a look for the tape - pretty sure I've kept it, and I'll get back to you. Cheers.

jimburton2000 Says –
If you ever do find this tape, my e-mail is: jimburton2000@hotmail.com
Thanks!
If you'd like to leave a comment, please Login. Login
Manchester Digital Music Archive is licensed under an
Attribution-NonCommercial-ShareAlike 4.0 International License.
Charity no. 1164179
Our archive currently contains 3796 Bands, 743 DJs, 1432 Venues, 294 Industry Professionals and 28238 artefacts contributed by 3896 members.