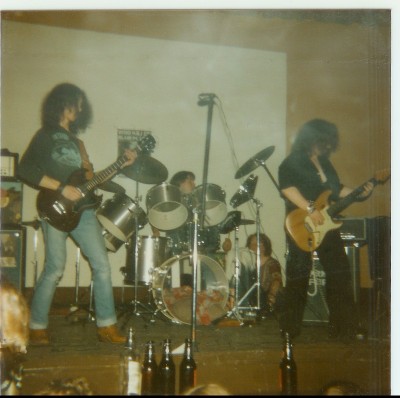 F104
Rock Against Racism gig,Dukinfield Town Hall,1979.
Supported by Armed Force.
This was our first gig and before we had the lightshow and pyro's and just before I came out of my Ritchie Blackmore phase.The lad in the kaftan next to the drums was Martin Bates (aka Master),an ugly mithering bugger who followed us around everywhere.........our first groupie !!.Mind you,he looked better than some of the females that tried to get to know us !!.
Artefact added : 13th June 2007
by Arnie

mat Says –
and did he always squat next to the drums? seems like a strange place.

chips2007 Says –
Hi Arnie
This was the night when Muppet, Armed Forces singer and several others were taken to the local police station because of a fight against some NF that were in the pub around the corner.
Gordon Kaye aka Renee of the series 'Hello 'Hello' came to the gig and was the one who went to aid of those arrested and eventually managed to persuade the police that in the interest of all concerned that they should drop any charges they may have against those they were holding which they eventually did.
I remember emotions being fired up and we went on to play the gig without Muppet until the last few numbers, when everyone arrived back in the hall and the place went mad.

From what I also remember, it was a great concert.

Aye chips,it certainly was a night to remember !!
We panicked when we heard of the arrests........if Armed Force could'nt play it'd just be us and not everyone in the crowd was there for the heavy metal !!.We got into a bit of an altercation outside when we were packing up and leaving.A few overenthusiastic members of RAR took it upon themselves to label us Nazi's........probably due to our image and us playing a Motorhead song and Lemmy having a penchant for Nazi war memorabilia !!
We later heard that a member of the audience was stabbed when we were on stage,though I don't know if there was any truth in it.
Needless to say we did'nt do anymore RAR gigs after that one.

dave wright Says –
I was at the gig giving F104 a lift with their gear. I remember the trouble. It seemed to be from a bit of a mix up with the punks thinking the rockers were Nazis, but it seemed to get sorted in the end. Both band were brilliant, but, although Dave Smith was active, I don't remember F104 doing any more ROR gigs.
If you'd like to leave a comment, please Login. Login
Manchester Digital Music Archive is licensed under an
Attribution-NonCommercial-ShareAlike 4.0 International License.
Charity no. 1164179
Our archive currently contains 3734 Bands, 739 DJs, 1424 Venues, 261 Industry Professionals and 27925 artefacts contributed by 3860 members.