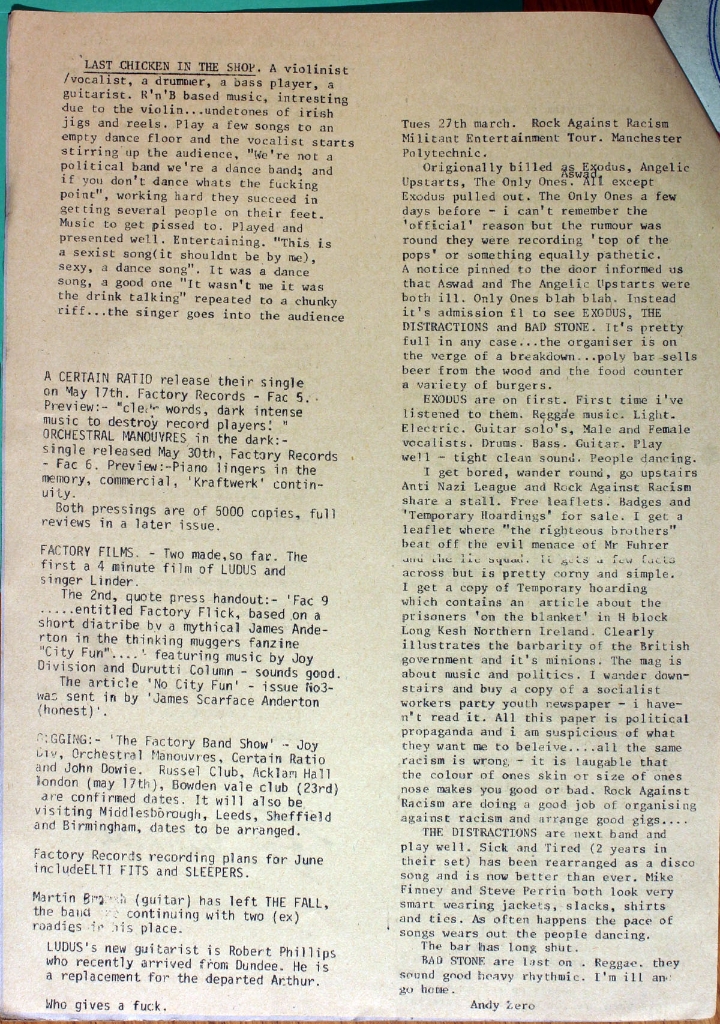 LAST CHICKEN IN THE SHOP. A violinist / vocalist, a drummer, a bass player, a guitarist. R’n’B based music, intresting due to the violin…undertones of irish jigs and reels. Play a few songs to an empty dance floor and the vocalist starts stirring up the audience. “We’re not a political band, we’re a dance band; and if you don’t dance what’s the fucking point”, working hard they succeed in getting several people on their feet. Music to get pissed to. Played and presented well. Entertaining. “This is a sexist song(it shouldn’t be by me), sexy, a dance song”. It was a dance song, a good one “It wasn’t me it was the drink talking” repeated to a chunky riff…the singer goes into the audience

A CERTAIN RATIO release their single on May 17th. Factory Records – Fac 5. Preview:- “clear words, dark intense music to destroy record players! “
ORCHESTRAL MANOUVRES in the dark:- single released May 30th, Factory Records – Fac 6. Preview:-Piano lingers in the memory, commercial, ‘Kraftwerk’, contin-uity.
Both pressings are of 5000 copies, full reviews in a later issue.
FACTORY FILMS – Two made, so far. The first a 4 minute film of LUDUS and singer Linder.
The 2nd, quote press handout:- ‘Fac 9….Entitled Factory Flick, based on a short diatribe by a mythical James Anderton in the thinking muggers fanzine “City Fun”…. featuring music by Joy Division and Durutti Column – sounds good.
The article ‘No City Fun’ – issue No3- was sent in by ‘James Scarface Anderton (Honest)’.
GIGGING: ‘The Factory Band Show’ – Joy Div, Orchestral Manouvres, Certain Ratio and John Dowie. Russel Club, Acklam Hall london (may 17th), Bowden vale club (23rd) are confirmed dates. It will also be visiting Middlesborough, Leeds, Sheffield and Birmingham, dates to be arranged.
Factory Records recording plans for June includeELTI FITS and SLEEPERS.
Martin Bramah (guitar) has left THE FALL, the band are continuing with two (ex) roadies in his place.
LUDUS’s New guitarist is Robert Phillips who recently arrived from Dundee. He is a replacement for the departed Arthur.
Who gives a fuck.
1. Tues 27th march. Rock Against Racism Militant Entertainment Tour. Manchester Polytechnic.
Origionally billed as Exodus, Angelic Upstarts, The Only Ones, Aswad. All except Exodus pulled out. The Only Ones a few days before – i can’t remember the ‘official’ reason but the rumour was round they were recording ‘top of the pops’ or something equally pathetic. A notice pinned to the door informed us that Aswad and The Angelic Upstarts were both ill. Only Ones blah blah. Instead, it’s admission £1 to see EXODUS, THE DISTRACTIONS and BAD STONE. It’s pretty full in any case…the organiser is on the verge of a breakdown… poly bar sells beer from the wood and the food counter a variety of burgers.
EXODUS are on first. First time i’ve listened to them. Reggae music. Light. Electric. Guitar solo’s. Male and Female vocalists. Drums. Bass. Guitar. Play well – tight clean sound. People dancing.
I get bored, wander round, go upstairs Anti Nazi League and Rock Against Racism share a stall. Free leaflets. Badges and “Temporary Hoardings” for sale. I get a leaflet where “the righteous brothers” beat off the evil menace of Mr Fuhrer and the lie squad. It gets a few facts across but is pretty corny and simple. I get a copy of Temporary hoarding which contains an article about the prisoners ‘on the blanket’ in H block Long Kesh Northern Ireland. Clearly illustrates the barbarity of the British government and it’s minions. The mag is about music and politics. I wander down-stairs to buy a copy of a socialist workers party youth newspaper – i have-n’t read it. All this paper is political propaganda and i am suspicious of what they want me to beleive… all the same racism is wrong – it is laughable that the colour of ones skin or the size of ones nose makes you good or bad. Rock Against Racism are doing a good job of organising against racism and arrange good gigs….
THE DISTRACTIONS are the next band and play well. Sick and Tired (2 years in their set) has been rearranged as a disco song and is now better than ever. Mike Finney and Steve Perrin both look very smart wearing jackets, slacks, shirts and ties. As often happens the pace of songs wears out the people dancing.
The bar has long shut.
BAD STONE are last on. Reggae. They sound good heavy rhythmic. I’m ill an go home.
Andy Zero
Artefact added : 6th August 2020
by Mike Noon

Caleb Allport Says –
This is amazing, Mike. Thank you for sharing!

I'm currently a student in Manchester studying Music Media researching The Russell club and Factory's first club nights there in the late 70's as part of an article that I'm looking to put together.

By any chance, I don't suppose you are able to offer a little more insight with me? Many thanks.

Mike Noon Says –
Hello Caleb. Sorry for the delay in responding. I'm just the person who uploaded and transcribed this page, I'm afraid. You should be able to do a word search which picks up any references to The Russell and Factory within the first ten issues of City Fun. (That's as far as I've got with the transcribing). Be aware that for a long time the editors of the magazine seemingly deliberately (it was that consistent) misspelled the name of the venue as The Russel. This will bring up more results in 'Deep Search'.
If you haven't already you might also want to take a look at Gareth Ashton's 'Manchester: It Never Rains' and Martin Ryan's 'Friends of Mine'. Although they concentrate on punk rock, they do set the scene for what comes after and many of the players are the same. Both were published locally by Empire Publications. Good luck with your piece regardless.
If you'd like to leave a comment, please Login. Login
Manchester Digital Music Archive is licensed under an
Attribution-NonCommercial-ShareAlike 4.0 International License.
Charity no. 1164179
Our archive currently contains 3873 Bands, 759 DJs, 1464 Venues, 323 Industry Professionals and 29805 artefacts contributed by 4067 members.