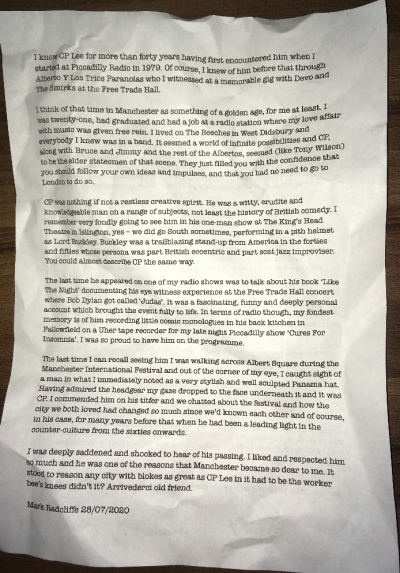 Print out of text sent by radio broadcaster Mark Radcliffe text in response to CP Lee's passing. The text recalls the impact and influence CP Lee had on the music scene in Manchester. Radcliffe recounts several memorable appearances Dr Lee made on his radio programmes, including 'Cures for Insomnia'.The text reads:

I knew CP Lee for more than forty years having first encountered him when I started at Piccadilly Radio in 1979. Of course, I knew of him before that through Alberto Y Los Trios Paranoias who I witnessed at a memorable gig with Devo and The Smirks at the Free Trade Hall.

I think of that time in Manchester as something of a golden age, for me at least. I was twenty-one, had graduated and had a job at a radio station where my love affair with music was given free rein. I lived on The Beeches in West Didsbury and everybody I knew was in a band. It seemed a world of infinite possibilities and CP, along with Bruce and Jimmy and the rest of the Albertos, seemed (like Tony Wilson) to be the elder statesmen of that scene. They just filled you with the confidence that you should follow your own ideas and impulses, and that you had no need to go to London to do so.

CP was nothing if not a restless creative spirit. He was a witty, erudite and knowledgeable man on a range of subjects, not least the history of British comedy. I remember very fondly going to see him in his one-man show at The King’s Head Theatre in Islington, yes – we did go South sometimes, performing in a pith helmet as Lord Buckley. Buckley was a trailblazing stand-up from America in the forties and fifties whose persona was part British eccentric and part scat jazz improviser. You could almost describe CP the same way.

The last time he appeared on one of my radio shows was to talk about his book ‘Like The Night’ documenting his eye witness experience at the Free Trade Hall concert where Bob Dylan got called ‘Judas’. It was a fascinating, funny and deeply personal account which brought the event fully to life. In terms of radio though, my fondest memory is of him recording little comic monologues in his back kitchen in Fallowfield on a Uher tape recorder for my late night Piccadilly show ‘Cures For Insomnia’. I was so proud to have him on the programme.

The last time I can recall seeing him I was walking across Albert Square during the Manchester International Festival and out of the corner of my eye, I caught sight of a man in what I immediately noted as a very stylish and well sculpted Panama hat. Having admired the headgear my gaze dropped to the face underneath it and it was CP. I commended him on his titfer and we chatted about the festival and how the city we both loved had changed so much since we’d known each other and of course, in his case, for many years before that when he had been a leading light in the counter-culture from the sixties onwards.

I was deeply saddened and shocked to hear of his passing. I liked and respected him so much and he was one of the reasons that Manchester became so dear to me. It stood to reason any city with blokes as great as CP Lee in it had to be the worker bee’s knees didn’t it? Arrivederci old friend.