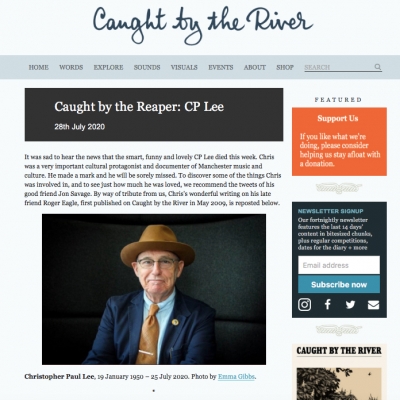 Screenshot of Caught by the River's Remembrance post titled "Caught by the Reaper: CP Lee". The post features a reprint of Dr CP Lee's 2009 tribute to Roger Eagle. Caught by the River first ran the writing in May 2009. They reposted it on 28 July 2020 as a "tribute" to his writing upon the announcement of Dr Lee's passing on 25 July 2020. It was accompanied by a photograph by Emma Gibbs of Lee. The full text from the article reads:

It was sad to hear the news that the smart, funny and lovely CP Lee died this week. Chris was a very important cultural protagonist and documenter of Manchester music and culture. He made a mark and he will be sorely missed. To discover some of the things Chris was involved in, and to see just how much he was loved, we recommend the tweets of his good friend Jon Savage. By way of tribute from us, Chris’s wonderful writing on his late friend Roger Eagle, first published on Caught by the River in May 2009, is reposted below.

I first met Roger in 1966 at around the time he was finishing DJ’ing at the Wheel. He lived in a flat opposite my girlfriend’s house and I used to watch him load and unload a transit van that proudly proclaimed on the side ‘The Milton James Soul Band’, Milton, a Black American singer, being Roger’s latest protégé – sadly he wasn’t a very good soul singer despite having everything else right and soon Milton and Roger parted company. By then of course it was 1967 and Roger was embracing the ‘alternative’ lifestyle. He noticed that he had young hippies across the road and eventually we were invited in for listening sessions. This was my first experience of the University of Roger Eagle. Basically, the syllabus consisted of being put in an armchair, fed with cannabis and then being subjected to an intense musical bombardment.

The music could consist of anything – anything that had passed the Roger Eagle test that is. He was moving on from his solid position that had led to leaving the Wheel – his motto (which was over the door of his Mancunian Wake) ‘Nothing past 63!’ was the cut off date for records to be played – he loathed Motown and what he considered the commercial drek coming out of urban America, but as his drug use now extended to embracing psychedelics (he gave me my first trip around then) so his musical tastes were expanding too and he was wrapping his head and ours around such acts as Jefferson Airplane, who he adored and Captain Beefheart and The Magic Band, who he would have died for. In fact, in 1968 we all trooped down to Manchester University and stood at the front of the stage to watch the Magic Band and Don Van Vliet first met Roger.

This meeting was to change the lives of both of them, impacting upon their destinies in a manner which had a knock on effect for so many other people too.

However, it was that year that Roger opened the psychedelic dungeon known as the Magic Village in Manchester’s Cromford Court. It was actually a first rate gig and Roger booked many of the top acts of the time, including his old friend John Mayall, the Third Ear Band, Jethro Tull, Pink Floyd, Ten Years After, Joe Cocker, act after act who are now legendary.

Time and circumstance led to Roger’s leaving the Village and setting off for pastures new which this time meant Liverpool. He’d been managing my band Greasy Bear in the late 60s and although we’d moved on from his tender, loving care, he still booked us to appear on the bill at the Liverpool Stadium, and old wrestling and boxing arena that reeked of blood, sweat and linament but strangely became a prime venue for people such as Sha Na Na, Quiver, Cat Stevens, Mott The Hoople – again another roster of early 70s Rock music.

By 1977 I was in a band called the Albertos and Roger was busy pioneering another venue in Liverpool – the mighty Eric’s Club. As well as still booking me Roger was turning Eric’s into a giant musical laboratory where the likes of Teardrop Explodes and the Mighty Wah were cutting their teeth while watching some of the finest Punk and New Wave acts appearing live on stage.

After Eric’s Roger didn’t give up but moved back to Manchester to run an old skating rink was called The International – here he intro­duced us Mancs to the wonders of World Music as well as the usual roster of first-rate acts from here and the States.

Roger finally moved to Anglesey and his eventual demise – which I’m sure were not linked.

While Roger is no longer here on the planet what remains of Roger is all the people he shoved through his university, all the souls he strapped in the armchair and gave a crash course in essential listening to. I’ve not met one person who wasn’t deeply influenced by Roger’s outlook on life and on music. He was utterly unique – warm hearted and forceful, he was too much of a gentleman to have survived for as long as he did in an industry that is slowly going to hell in a hand-cart.

Bill Drummond said that an apt memorial would be a giant sculpture of Roger’s huge mono speaker cabinet that travelled through the decades with him made out of stone and standing fifty foot high on top of the Pennines – Sealed inside would be all the records he considered great. I agree with Bill.

It was a pleasure, a privilege and an honour to have breathed the same air as that man.

The post can be accessed through Caught by the River's website here www.caughtbytheri...
Artefact added : 3rd August 2020
by Sarah F