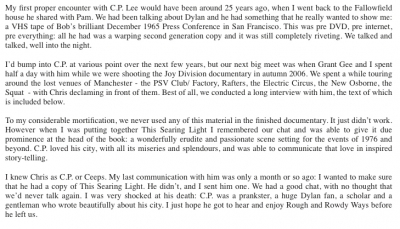 Statement written by Jon Savage in remembrance of Dr CP Lee upon the announcement of his passing in July 2020. Jon Savage writes:

My first proper encounter with C.P. Lee would have been around 25 years ago, when I went back to the Fallowfield house he shared with Pam. We had been talking about Dylan and he had something that he really wanted to show me: a VHS tape of Bob’s brilliant December 1965 Press Conference in San Francisco. This was pre DVD, pre internet, pre everything: all he had was a warping second generation copy and it was still completely riveting. We talked and talked, well into the night.

I’d bump into C.P. at various point over the next few years, but our next big meet was when Grant Gee and I spent half a day with him while we were shooting the Joy Division documentary in autumn 2006. We spent a while touring around the lost venues of Manchester - the PSV Club/ Factory, Rafters, the Electric Circus, the New Osborne, the Squat - with Chris declaming in front of them. Best of all, we conducted a long interview with him, the text of which is included below.

To my considerable mortification, we never used any of this material in the finished documentary. It just didn’t work. However when I was putting together This Searing Light I remembered our chat and was able to give it due prominence at the head of the book: a wonderfully erudite and passionate scene setting for the events of 1976 and beyond. C.P. loved his city, with all its miseries and splendours, and was able to communicate that love in inspired story-telling.

I knew Chris as C.P. or Ceeps. My last communication with him was only a month or so ago: I wanted to make sure that he had a copy of This Searing Light. He didn’t, and I sent him one. We had a good chat, with no thought that we’d never talk again. I was very shocked at his death: C.P. was a prankster, a huge Dylan fan, a scholar and a gentleman who wrote beautifully about his city. I just hope he got to hear and enjoy Rough and Rowdy Ways before he left us.