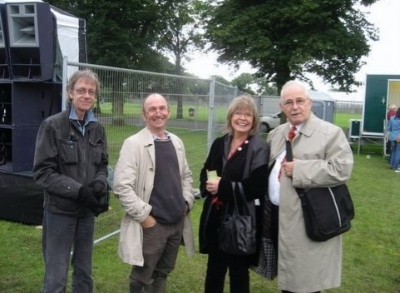 Photograph was taken by Phil Jones (Concert Promoter, Artiste Manager and Manchester Food and Drink Festival Director) at the "Summer in the Park" event held in Platt Fields Park on 12 and 13 July 2010. The photo shows John Scott (Alberto Y Lost Trios Paranoias), Phil Jones, Pam Lee and Dr CP Lee. This artefact was submitted in celebration of the life of CP Lee as a remembrance upon his passing in July 2020. Phil Jones includes the following reflection and statement:

first saw CP onstage at the Reading Festival August Bank Holiday 1975 as part of the provocatively named Alberto Y Lost Trios Paranoias. Their superb management, the legendary Blackhill Enterprises had managed to get them promoted up the bill to replace Lou Reed, who had pulled out. We had no idea what they were or who they were, could it be a flamenco trio.? it was the Lost that gave the game away for me. Why Lost not Los? It sounded like a piss-take, and it was, there was no evidence of Spanish guitars anywhere. They turned out to be a 6 or was it seven-piece rock band fronted by three quite scary nutters, including CP, bouncing off Jimmy Hibbert and Les Pryor. They were the funniest thing I'd ever seen, parodying everyone in rock from Bowie to Merle Haggard. I always remember "we’d like to thank our Dutch transport sponsors ... Truck Van Rental". As a band they were so tight, featuring a great guitarist Simon White, who doubled superbly on the peddle steel. They used the massive Reading stage brilliantly at 9 pm on Sunday evening, somewhat incongruously between Robin Trower and Wishbone Ash. The crowd of 30,000+ took them to their hearts and they stormed the Festival. Definitely one of the major highlights of the year.

The show, and it was definitely a show, was exhilarating, fantastic lights and sound and some very strange characters. Not just the 3 frontmen, but the drummer, a man I later found out to be called Bruce Mitchell, also stood out, dressed in a loud yellow suit with a kipper tie and long extending arms. I truthfully had never seen anything like it. I was hooked and wanted all my mates to be too. A few days on and I took a full camper van to see them again in a pub in Sheffield in front of 50 people. The drama was lacking but they still delivered. I made the effort to talk to them after the show and CP was very welcoming. It was our first conversation in over 45 years of friendship.

In early October, I started my degree at Manchester University, aged 19. During Freshers week I was walking down Oxford Road In the mode and saw CP and Bruce leaving 178 Waterloo Place. The home I later learned of their production company Music Force, an organization whose directors included Martin Hannett, Anthony Ryan-Carter and Bruce Mitchell. I was stunned, it was that moment when I realised pop stars have normal lives too and you could just bump into them. I nervously shouted to them " didn't I see you In Sheffield last month? ' "Might av" came the stunted reply.

The Albertos became a part of my life and most of the band became friends. I saw them literally dozens of times. A Guaranteed good night. They had a UK Top 30 hit with the Heads Down No Nonsense Mindless Boogie EP. It went Top 10 In Holland, where they were a big name. They headlined over Devo at the Free Trade Hall and became a must at all Festivals, especially in Europe. In 1978, Snuff Rock was premiered. it was an exceptional theatre piece CP dreamed up. It started in the Squat on Devas St, where I saw it twice.

Moved to The Royal Court to great acclaim and then transferred to Broadway. Except it didn't because John Lennon was murdered the day before it should have opened. They came back to the UK and sort of drifted. They were Pre and Post-punk. Maybe their frequent mockery of punk itself wore thin with the crowds. Skint and tired after 6 years solid on the road. Tony Bowers left and was replaced By Capt Mog, John Scott was added and Les sadly died in 1980. Something was missing and it was the beginning of the end. They did get their own show On Granada TV for a while, which was essential viewing at the ridiculous time of 5.30 pm on Friday evening. The band broke up soon afterward, leaving a large gaping hole in the UK's live music scene.

Ever the addicts for the live show, CP and Bruce started a soul covers band The Charlie Parkas. CP was the lead singer and very good he was too. I began promoting them around Manchester. Every Thursday we all went to their night at the Lamplight Club, upstairs through a little door on the main drag in Chorlton. That was 1980/82, I got to become part of what I call the Didsbury Bohemians set there. Others call it The Mafia, Wilson, Tosh Ryan, Hannett, CP, and The Berts were there every week. It was a great night. No Guestlist and cash on the door. I started to get invited to their parties.

I'm honored to be in the Mancunian photographer Ged Murrays Photo album of well-known characters from the Didsbury scene of that time. Many of which feature CP with a social audience. He was one of many frequent attendees at Richard Boon's New Hormones office at 50 Newton St, where I was based. It was a hangout for all the New Hormones acts of which CP was one. A cassette release of him with "Radio Sweat", if I recall correctly? We spent a lot of time in the pub chewing the fat.

I Left Manchester symbolically in a huff on New Years' Eve 1982. Ginger Jones had offered me the gig as assistant manager at this new Club the Hacienda shortly after we promoted New Order at Comanche SU on Hathersage Rd. I hung around Manchester for months managing Nico with Wise and promoting all the shows at Rafters, Rotters, etc, but really waiting for this big break. At the last minute, they gave it to "Rob's mate " Some guy called Mike Pickering. I watched as The Hac struggled and decided it was a good thing I was about to become an agent in the Big Smoke. My first job was organising Curtis Mayfield's 1983 Summer Europe tour! So, I was happy. We had an office on Tin Pan Alley, Denmark St. WC2.
CP was again a regular visitor along with Victor Brox, Nico, JCC, The Biting Tongues, and many other wayward Mancs, but he was not well. The rock and roll lifestyle had caught up with him. One night at a Rough Trade party he failed to recognise me. I was quite upset and decided to give him a wide berth, and prayed he sorted himself out.

There was therefore no-one happier than me when I returned to Manchester in the late 80s, to hear he had enrolled as a student at Salford Uni, studying popular culture. I was made Director of the Olympic Arts Festival in 1990. CP came up with a great proposal. Showing the Films made in Manchester in the 50 and 60s and, a Roger Corman Retrospective. I got them included and he delivered a fine programme. He was back in business. The Olympic Festival metamorphized into The Boddingtons Manchester Festival of Arts and Television and even The Manchester International Festival in 1994. CP was the Film consultant and revelled in his advisory role. We met for what we called " Information exchanges" frequently. Really just an excuse for a few beers and a good chat, with him cracking his situationist jokes throughout, and me laughing hysterically.

In the last 30 years, our paths have crossed many times. I was so glad when he and Pam got together and were so much in love. I was thrilled for CP when he got his degree, then became a doctor. I always called him Doctor Lee. His TV Talking Heads career on everyone from Frank Sidebottom to Frank Sinatra became a must for all Producers of those kinds of shows. He always did himself proud.

About 10 years ago we dreamed up a daft idea, The Festival of Musical Comedy at The Lowry. It was just a way for him to get a gig for his new band supporting John Cooper Clarke and me to give Sidebottom a decent profile gig. He had lots of great ideas and badgered me to do another. We didn't unfortunately. When he had his cancer scare a few years back it must have been horrific for him and Pam, but he rode the storm and came back stronger and even more elegantly dressed.

The back end of last year Chris Joyce phoned me, his great band DoveTales needed an MC for a charity show they were running. I emailed CP, he was back within 5 mins. He'd love to. I regret not going to that gig, just before lockdown. I last saw CP, when he and Pam came to JCCs gig in Amsterdam. They came to the dressing room afterward and then we adjourned to a nearby bar. We had a few beers and the next day met up in one of the suburban parks for a street food event. We ate well and I said goodbye, before heading for my evening flight home.

In the build-up to Bruce's 80th in early June I spoke to him a lot, getting long lost friends, roadies, and the likes contacts, CP had them all. He stayed in touch with people. He delivered a superb piece himself to the camera, topless and unashamed of his flab, as part of the film we made to send to Mitchell for his 80th. We had a long email exchange in early July, he was wishing me Happy Birthday. Nice thought CP, but its almost 2 weeks late, given the circumstances, I'll let him off.

When I gave it a bit of thought, I realised I'd pitched an idea for an annual event called When I'm 64 at him. A festival over a long weekend curated by somebody who was becoming 64. I'd held the Ritz for July 4th, just after my 64th to create the first one and told him to diary it when we were in The Dam. He did that and confused it with my actual birthday. I pointed out the scenario to him. He quickly turned it into a comedy about me Trooping the Colour and having 2 Birthdays, one official, and one for the close family. He told me about the forthcoming Albertos compilation On Cherry Red, which he was looking forward to. We had a mutual moan about the government. He told me he was heading to Spain for holidays and we should meet soon after.

That's not happening now. I'll miss Doctor Lee immensely. His talent was infinite. Hugely influential over me and many thousands of others. Perhaps never totally fulfilled musically. He had a truly unique way with people and always had time for everyone. He was full of knowledge, wit, and charm. He looked great in a suit of any kind. I never saw him scruffy. He was a great mate and I was always a better person after one of my interactions with him.

RIP CPL. No doubt you're already getting the band together in a different place. Love, Phil.