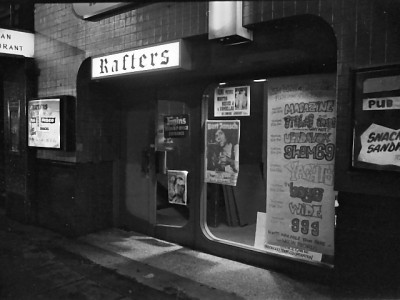 After the Ranch Bar and the Electric Circus had closed down Rafters became the main place to see punk bands in Manchester. It was a disco situated under a cabaret club called Fagins on Oxford Road. This picture was taken in Feb 78 and you can see from the poster on the door who was around at the time:

You can also see a poster for Martha Reeves and the Vandellas playing upstairs to the chicken in a basket crowd.
Artefact added : 4th July 2007
by Bernie Wilcox

Arnie Says –
Went to see Motorhead here on 6th March 1976.My mate Dave threw up over Fast Eddie Clarke's snake skin cowboy boots in the toilets(while Fast Eddie was wearing them)!!.I seem to remember a young woman who frequented Fagins who had the rather charming nickname of 'Hairy Mary from the Dairy'!!.

Steve McGarry Says –
I used to produce all the inhouse promo posters for Rafters - that's one of mine in the window there. I would buy a huge roll of yellow dayglo paper and do these giant posters, probably three to five feet in length. The lettering was all hand drawn in black with various shades of red and green, in a kind of graffiti style.

Dougie James was the promoter, and each week he'd give me a list of names of the upcoming bands and I'd do a separate poster for each one.

Rob Gretton was the house deejay, so he was working there and I'd be hanging out two or three times a week. That's where Rob first saw Warsaw, if I recall correctly, before the name change to Joy Division.

The Sham 69 gig that was advertised in the window was one where it all kicked off, I remember. A band of skins steamed into the club during the set and there was pint pots and bottles flying all over the place. Pretty ugly.

I can remember wandering upstairs many times into Fagins. Dougie James and the Soul Train played there a lot - I can recall seeing Tony Wilson get up on stage with Dougie one night - and you'd find Ray Teret or Sad Cafe in there having a drink.

mat Says –
what a shame that these hand-drawn posters weren't kept!

Dan Says –
I remember seeing Motorhead at Rafters sometime in 1978. My ears were buzzing for days after. I wasn't really into them but I worked with Neil Cossar at the HMV shop and his band were supporting. I think they were called Giro and he was with them before 'The Cheaters'. Also at HMV then were Pete Carroll, Jim, Derek on Singles, Joel, Tony Gozem, Chris and Phil from Any Trouble, Ken on Security and Pete Waddington the boss.

Phil B Says –
That Sham 69 gig - was it the one where several turned up in 'clockwork orange' gear and 'kicked off' all I remember was waking up at the 192 bus stop in Picadilly with a rather large lump on my head and blood all over my mohair jumper
If you'd like to leave a comment, please Login. Login
Manchester Digital Music Archive is licensed under an
Attribution-NonCommercial-ShareAlike 4.0 International License.
Charity no. 1164179
Our archive currently contains 3821 Bands, 748 DJs, 1444 Venues, 302 Industry Professionals and 29214 artefacts contributed by 3962 members.