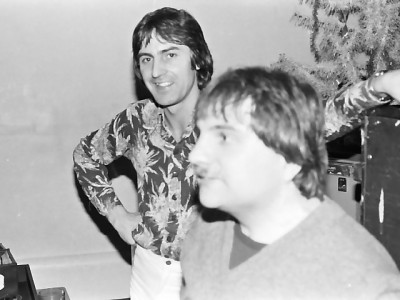 Militant Frank (Frank Manley) was the DJ for most of the Rock Against Racism gigs in Manchester as well as doing his own Northern Soul stuff.

He's pictured here (at the front with the tash) with Piccadilly Radio's Roger Day (what was he doing DJing at a Fall gig?)

Frank played some great stuff to get things going and always ended with the Wayne County and the Electric Chairs song "If you don't want to fuck me baby, baby fuck off."

Never got him a shag though.
Artefact added : 4th July 2007
by Bernie Wilcox