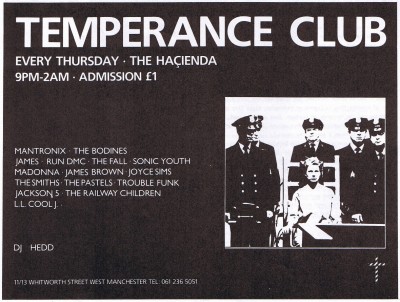 The first time I ventured to the Hacienda was late '87...I think? It was definitely a Thursday - Temperance night.
My record buying at the time didn't drift much from indie singles and The Smiths albums.
Tracks of the time like The Fall's - Mr Pharmacist being played alongside Public Enemy's - Bring The Noise, and The Sugarcubes - Birthday being played alongside early House beats was something, it seemed, only the Hac was doing.

Doesn't sound that groundbreaking now but the Hacienda was the first club I went to that would chance crossing over indie, hip-hop, rock and funk & merging the divide, things were changing, it was time to start dancing to a new groove!