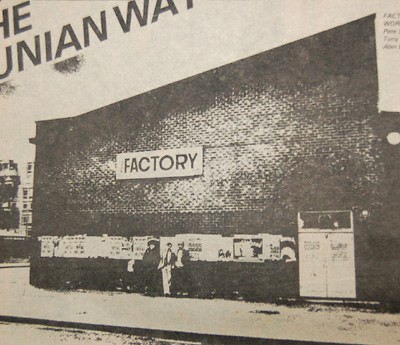 A photograph taken from Sounds in 1979 showing the three Factory Records directors, Peter Saville, Tony Wilson and Alan Erasmus, standing in front of the Russell Club (or The Factory as it was known on their night).

mat Says –
presumably this is the same photoshoot as the more famous shot of them stood outside?

middles Says –
Matt, the photoshoot was for a Sounds article I had written featuring Factory and a number of non Fac bands..Ludus, the Passage, Alien Tint among them.

middles Says –
PS...there had been a big argument in the Sounds office about this. The general feeling was that nothing of note ever happened in Manchester. Strangely it was Garry Bushell who stood up for the article, gaining it DPS status. The headline, Truth, Justice and the Mancunian Way was the title of an ep by, I think, The Tunes...or maybe Spherical Objects! The Distractions also featured. Not the most lasting collection of bands...but that was the scene at that precise moment and it did help to make the music press look north for a change.

middles Says –
That's right. Rhesus was run by a guy who used to work for a major...A and M or CBS? He was based in Manchester and was attempting to sign The Thompson Twins, from Chesterfield. He also had The Donkeys, a great little band from Yorkshire.

Helen Says –
Hi middles...If you wrote for Sounds during this period, I'd be interested in chatting to you if you're agreeable? Drop me an email? As I'm currently writing a book about Magazine, that goes for anyone who may have something of interest to share :) helenchase@googlemail.com
If you'd like to leave a comment, please Login. Login
Manchester Digital Music Archive is licensed under an
Attribution-NonCommercial-ShareAlike 4.0 International License.
Charity no. 1164179
Our archive currently contains 3616 Bands, 704 DJs, 1321 Venues, 219 Industry Professionals and 19589 artefacts contributed by 3537 members.