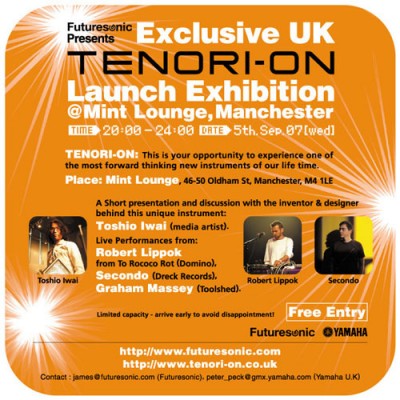 Launch event for a new audio visual instrument,"The Tenori On" by japanese visual artist Toshio Ewai,First seen at manchesters Future Sonic Festival in 2006. This product is only launched in the UK (unusual for Yamaha ajapaneese company)
And good that MCR was considered to be part of it.A great turn
out from manchesters nerd contingency..
Artefact added : 6th September 2007
by graham

graham Says –
Its a great interface for improvising sequences on the fly,very intuative ,,I combated the sound issue by midiing it up to some old analogue and a sampler.Also I had Paddy playing with me
as abit of musician interactivity..in fact this week Ive been pumping it through the tg 55 ,did nt want to take it out till ive got a lid for it
If you'd like to leave a comment, please Login. Login
Manchester Digital Music Archive is licensed under an
Attribution-NonCommercial-ShareAlike 4.0 International License.
Charity no. 1164179
Our archive currently contains 3683 Bands, 733 DJs, 1340 Venues, 233 Industry Professionals and 22657 artefacts contributed by 3698 members.