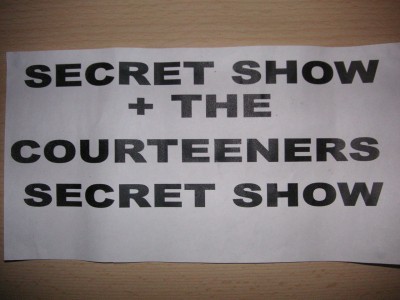 Walking along Oxford Rd on Friday 14/9/07 I spotted this blu-tacked underneath the main poster for the night at the Music Box, formerly Rafters.

I forget the advertised attraction of the night, but it included a DJ set from Courteeners frontman Liam Fray. Obviously a "secret" gig had been added.

I didn't think I could go as I was meeting people somewhere else and assumed the place would quickly get rammed in these days of texting etc.

Passing again at 12.30 I found that the band were just about to take the stage. A bit of blarney and I was in.

I posted a ticket up for a recent Courteeners gig at packed Academy 3 and was raving about them then. I still enjoyed this gig but the sound was bleedin awful and the band looked less than impressed and didn't play for too long. Great lyrics but couldn't hear em. Liam couldn't hear his own vocals and the guitarist couldn't hear himself either.

There was only about 150 people there (all types and ages) with about 50 seeming to know every word of every song. Still, for my money, Manchester's Most Likely To.

sme Says –
I was there! International one, The Reason and the Vortex were on the bill and the Courteeners did a little set
If you'd like to leave a comment, please Login. Login
Manchester Digital Music Archive is licensed under an
Attribution-NonCommercial-ShareAlike 4.0 International License.
Charity no. 1164179
Our archive currently contains 3870 Bands, 758 DJs, 1461 Venues, 323 Industry Professionals and 29719 artefacts contributed by 4047 members.